From Infogalactic: the planetary knowledge core
(Redirected from Dymocks)
Jump to: navigation, search 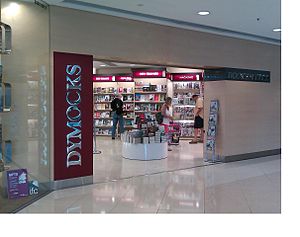 Dymocks booksellers is a privately owned bookstore chain founded in Australia. It currently[when?] has 65 stores in Australia,[1] and several stores in Hong Kong.[2]

Its first bookstore was opened in Sydney by William Dymock in 1879, in Market Street. As his business grew over the years, he moved to larger premises, and eventually had a million books in stock. As he had died childless and unmarried, the business passed to his sister, Marjory, who was married to John Forsyth. Since then, the Forsyth family has managed Dymocks. In 1922, the Dymock family purchased the site of the old Royal Hotel in George Street, and built the historic, Art Deco landmark Dymocks building, completed in 1930. In 1986 the bookstore chain was established as a franchise chain, and has since opened stores in every mainland Australian state, and also internationally in New Zealand and Singapore.[3]

In 1999, Dymocks Booksellers entered into a joint venture with South China Morning Post (Holdings) to set up Dymocks Franchise Systems (China), in order to expand the Dymocks chain into Hong Kong.[4]

The first store with the Dymocks brand opened at the Star Ferry concourse in Central in 1999.[5]

Three Dymocks stores closed in 2012 in Hong Kong when their rental contracts expired.[6]

It was announced in January 2015 that Dymocks would close its flagship IFC MALL store on January 25, and that it would subsequently close its Hong Kong office. After the closure of the IFC Mall store, the number of Dymocks stores in Hong Kong would be brought down to five. The remaining stores are expected to operate independently using the Dymocks name before being rebranded individually.[6]

In addition to stocking music CDs, DVDs and other related items, Dymocks now has an online store launched in late 2006 in response to the increasing penetration into the Australian book market of online retailers such as Amazon.com.[7]

Dymocks has a comprehensive multi-channel strategy including an international retail network of approximately 65 stores in Australia and 12 stores in Hong Kong; an online website; loyalty program, regular catalogues and social media.

In 2009 Dymocks acquired an 80% equity stake in the Australian owned and operated Healthy Habits sandwich bar franchise for an undisclosed sum.[8]

Dymocks has a loyalty program called 'Dymocks Booklover Rewards', originally launched in 2001, and relaunched in 2006. It is a free program to join, and shoppers can receive discounts after making purchases. Every purchase that is made accumulates points. For every $100 that is spent, a discount of $5 off your next purchase can be made. Prizes occur each month, and members receive information about upcoming releases, book launches and VIP nights.