From Infogalactic: the planetary knowledge core
Jump to: navigation, search
This article is about the high explosive. For other uses, see Dynamite (disambiguation). 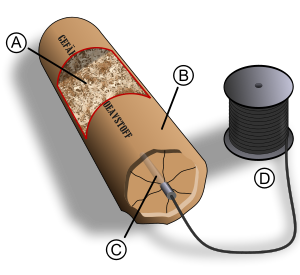 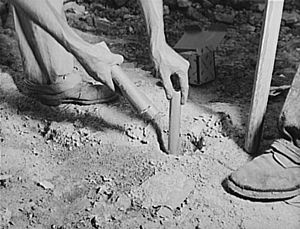 Preparation of dynamite during the construction of the Douglas Dam, 1942.

Dynamite is an explosive material based on nitroglycerin, using diatomaceous earth (AmE: kieselgur; BrE: kieselguhr), or another adsorbent substance such as powdered shells or clay. Dynamites using organic materials as sorbents such as sawdust are less stable and such use has been generally discontinued. Dynamite was invented by the Swedish chemist and engineer Alfred Nobel in Geesthacht, Germany, and patented in 1867.

Invention, purpose, and use 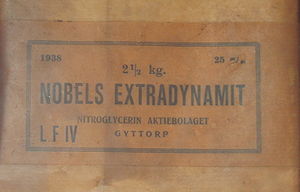 Dynamite was invented by Alfred Nobel and was the first safely manageable explosive stronger than black powder. Nobel obtained patents for his invention in England on May 7, 1867, in Sweden on October 19, 1867.[1] After its introduction, dynamite rapidly gained wide-scale use as a safe alternative to black powder and nitroglycerin. Nobel tightly controlled the patents, and unlicensed duplicating companies were quickly shut down. However, a few American businessmen got around the patent by using a slightly different formula.[2]

An industrialist, engineer, and inventor, Alfred Nobel's father, Immanuel Nobel, built bridges and buildings in Stockholm. His construction work inspired him to research new methods of blasting rock. Immanuel's work with explosives later on inspired Alfred to make explosives safer and more effective. Today Dynamite is mainly used in the mining, quarrying, construction, and demolition industries. Dynamite is still the product of choice for trenching applications, and as a cost-effective alternative to cast boosters. Dynamite is occasionally used as an initiator or booster for AN and ANFO explosive charges.

Nitroglycerin by itself is a very strong explosive, but is extremely shock-sensitive (that is, physical shock can cause it to explode), and degrades over time to even more unstable forms, which makes it highly dangerous to transport or use. Dynamite combines nitroglycerin with adsorbents and stabilizers, rendering it safe to use, but retaining the powerful explosive properties of nitroglycerin. The most common composition of dynamite consists of three parts nitroglycerin, one part diatomaceous earth and a small admixture of sodium carbonate.

Dynamite is usually sold in the form of cylinders about 8 in (20 cm) long and about 1.25 in (3.2 cm) in diameter, with a weight of about 0.5 lb troy (0.186 kg).[5] Other sizes also exist. The maximum shelf life of nitroglycerin-based dynamite is recommended as one year from the date of manufacture under good storage conditions.[5] A stick of dynamite thus produced contains roughly 1 MJ of energy.

Over time, regardless of the sorbent used, sticks of dynamite will "weep" or "sweat" nitroglycerin, which can then pool in the bottom of the box or storage area. For that reason, explosive manuals recommend the repeated turning over of boxes of dynamite in storage. Crystals will form on the outside of the sticks causing them to be even more shock, friction, and temperature sensitive. This creates a very dangerous situation. While the risk of an explosion without the use of a blasting cap is minimal for fresh dynamite, old dynamite is dangerous. Modern packaging helps eliminate this by placing the dynamite into sealed plastic bags, and using wax coated cardboard.

Dynamite is moderately sensitive to shock. Shock resistance tests are usually carried out with a drop-hammer: about 100 mg of explosive is placed on an anvil, upon which a weight of between 0.5 and 10 kg is dropped from different heights until detonation is achieved.[6] With a hammer of 2 kg, mercury fulminate detonates with a drop distance of 1 to 2 cm, nitroglycerin with 4 to 5 cm, dynamite with 15 to 30 cm, and ammoniacal explosives with 40 to 50 cm. 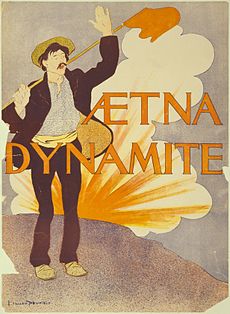 Advertisement for the Aetna Explosives Company of New York.

For several decades beginning in the 1940s, the largest producer of dynamite in the world was the Union of South Africa. There the De Beers company established a factory in 1902 at Somerset West. The explosives factory was later operated by AECI (African Explosives and Chemical Industries). The demand for the product came mainly from the country's vast gold mines, centered on the Witwatersrand. The factory at Somerset West was in operation in 1903 and by 1907 it was already producing 340,000 cases, 50 pounds (22 kilograms) each, annually. A rival factory at Modderfontein was producing another 200,000 cases per year.[7]

There were two large explosions at the Somerset West plant during the 1960s. Some workers died, but the loss of life was limited by the modular design of the factory and its earth works, and the planting of trees that directed the blasts upward. There were several other explosions at the Modderfontein factory. After 1985, pressure from trade unions forced AECI to phase out the production of dynamite. The factory then went on to produce ammonium nitrate emulsion-based explosives that are safer to manufacture and handle.[8]

Dynamite was manufactured by the E. I du Pont de Nemours Company until the mid-1970s. Other American dynamite makers of that time period included the Hercules Corporation, Atlas, Trojan US Powder, Austin, and several other smaller firms.

Currently only Dyno Nobel manufactures Dynamite in the US. The only facility producing it is located in Carthage, Missouri, but the material is purchased from Dyno Nobel by other manufacturers, who put their label on the dynamite and boxes.

Other explosives are often referred to or confused with dynamite:

Though both TNT and dynamite are high explosives, there is little similarity between them. Dynamite is a stabilized form of nitroglycerine while TNT is a chemical compound called trinitrotoluene. The energy density (joules/kilogram or J/kg) of dynamite is approximately 125% that of TNT: 5.0 MJ/kg for dynamite vs 4.0 MJ/kg of TNT.

"Military dynamite" is a dynamite substitute, formulated without nitroglycerin. It contains 75% RDX, 15% TNT, 5% SAE 10% motor oil, and 5% cornstarch, but much safer to store and handle for long periods than Nobel's dynamite.[9] Military dynamite achieves greater stability by avoiding the use of nitroglycerin and uses much more stable chemicals.[10]

Various countries around the world have enacted explosives laws and require licenses to manufacture, distribute, store, use, possess explosives or ingredients.