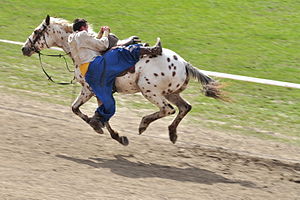 Dzhigit, also spelled as djigit or jigit, is a word of Turkic origin[1] ( yiğit in modern Turkish language) which is used in the Caucasus and Central Asia to describe a skillful and brave equestrian,[2] or a brave person in general.

The derived term dzhigitovka (or dzhigiting) means the special style of trick riding, which originated in the Turkman cultures of Caucasus and Central Asia, and is also popular with Russian Cossacks, who adopted it from the people of Caucasus.[3] When performing dzhigitovka, the riders at full gallop stand up, jump to the ground and back to the saddle, pick up objects from the ground (such as coins, hats, etc.), shoot targets with various weapons, ride hanging on the side or under the belly of the horse and do other acrobatic feats.[1]

Since the early 19th century dzhigitovka has been demonstrated in the circuses and horse sport competitions, and made its way to the popular Western culture, for instance Russian Cossacks (actually Georgian horsemen from western part of Georgia, Guria) demonstrated dzhigitovka as part of Buffalo Bill's Wild West Show.[4] Dzhigitovka was also used in training of cavalry forces in the Russian Empire and USSR.

Dzhigitovka as a sport competition is performed on a horse galloping at the 360 m long and 10 m wide path. The exercises are divided into three groups by their complexity. Maximum points are given for exercises of the most complex third group. Dzhigitovka as a circus performance includes complex stunts usually performed by a group of riders.