From Infogalactic: the planetary knowledge core
Jump to: navigation, search
For the experiment to test the equality of gravitational and inertial mass, see Eötvös experiment.

In the early 1900s (decade), a German team from the Institute of Geodesy in Potsdam carried out gravity measurements on moving ships in the Atlantic, Indian and Pacific Oceans. While studying their results the Hungarian nobleman and physicist Baron Roland von Eötvös (see Loránd Eötvös) (1848–1919) noticed that the readings were lower when the boat moved eastwards, higher when it moved westward. He identified this as primarily a consequence of the rotation of the earth. In 1908 new measurements were made in the Black Sea on two ships, one moving eastward and one westward. The results substantiated Eötvös' claim. Since then geodesists use the following formula to correct for velocity relative to the Earth during a measurement run.

is the relative acceleration

is the rotation rate of the Earth

is the velocity in latitudinal direction (east-west)

is the latitude where the measurements are taken.

is the velocity in longitudinal direction (north-south)

is the radius of the Earth

The most common design for a gravimeter for field work is a spring-based design; a spring that suspends an internal weight. The suspending force provided by the spring counteracts the gravitational force. A well manufactured spring has the property that the amount of force that the spring exerts is proportional to the extension of the spring from its equilibrium position. The stronger the effective gravity at a particular location, the more the spring is extended; the spring extends to a length at which the internal weight is sustained. Also, the moving parts of the gravimeter will be dampened, to make it less susceptible to outside influences such as vibration.

For the calculations it will be assumed that the internal weight has a mass of 10 kilograms, 10,000 grams. It will be assumed that for surveying a method of transportation is used that gives good speed while moving very smoothly: an airship. Let the cruising velocity of the airship be 25 meters per second (90 km/h, 55 miles/h).

Motion along the equator 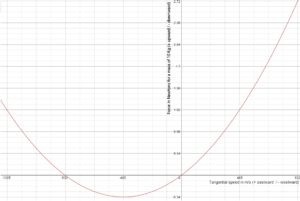 To calculate what it takes for the internal weight to be neutrally suspended when it is stationary with respect to the Earth the fact that the Earth rotates must be taken into account. At the equator the velocity of Earth's surface is about 465 meters per second. The amount of centripetal force required to cause an object to move along a circular path with a radius of 6378 kilometer (the Earth's equatorial radius), at 465 m/s, is about 0.034 newton per kilogram of mass. For the 10,000 gram internal weight that amounts to about 0.34 newton. The amount of suspension force required is the mass of the internal weight (multiplied with the gravitational acceleration), minus those 0.34 newtons. In other words: any object co-rotating with the Earth at the equator has its measured weight reduced by 0.34 percent, thanks to the Earth's rotation.

When cruising at 25 m/s due east, the total velocity becomes 465 + 25 = 490 m/s, which requires a centripetal force of about 0.375 newton. Cruising at 25 m/s due West the total velocity is 465 - 25 = 440 m/s, requiring about 0.305 newtons. So if the internal weight is neutrally suspended while cruising due east, it will not be neutrally suspended anymore after a U-turn; after the U-turn, the weight of the 10,000 gram internal weight has increased by about 7 grams; the spring of the gravimeter must extend some more to accommodate the larger weight.

In meteorology, in high performance models, this effect needs to be taken into account on terrestrial scale. Air mass that has a velocity with respect to the Earth has a tendency to migrate to another altitude, and when the accuracy demands are strict this must be taken into account.

Derivation of the formula for simplified case

Derivation of the formula for motion along the Equator.

is the total centripetal acceleration when moving along the surface of the Earth.

is the centripetal acceleration when stationary with respect to the Earth.

is the angular velocity of the Earth: one revolution per Sidereal day.

is the total angular velocity of the airship.

is the airship's velocity (velocity relative to the Earth).

is the Earth's radius.

It can readily be seen that in the case of motion along the equator the formula for any latitude simplifies into the formula above.

The second term represents the required centripetal acceleration for the airship to follow the curvature of the earth. It is independent of both the Earth's rotation and the direction of motion. For example, when an aeroplane carrying gravimetric reading instruments cruises over one of the poles at constant altitude, the aeroplane's trajectory follows the curvature of the earth. The first term in the formula is zero then, due to the cosine of the angle being zero, and the second term then represents the centripetal acceleration to follow the curvature of the Earth's surface.

Explanation of the cosine in the first term

File:Forces oblate spheroid2.gif
The force of gravity and the normal force. The resultant force acts as the required centripetal force.

The mathematical derivation for the Eötvös effect for motion along the Equator explains the factor 2 in the first term of the Eötvös correction formula. What remains to be explained is the cosine factor.

Because of its rotation, the Earth is not spherical in shape, there is an Equatorial bulge. The force of gravity is directed towards the center of the Earth. The normal force is perpendicular to the local surface.

On the poles and on the equator the force of gravity and the normal force are exactly in opposite direction. At every other latitude the two are not exactly opposite, so there is a resultant force, that acts towards the Earth's axis. At every latitude there is precisely the amount of centripetal force that is necessary to maintain an even thickness of the atmospheric layer. (The solid Earth is ductile. Whenever the shape of the solid Earth is not entirely in equilibrium with its rate of rotation, then the shear stress deforms the solid Earth over a period of millions of years until the shear stress is resolved.)

If an airship has an eastward velocity, then the airship is in a sense "speeding". The situation is comparable to a racecar on a banked circuit with an extremely slippery road surface. If the racecar is going too fast then the car will drift wide. For an airship in flight that means a reduction of the weight, compared to the weight when stationary with respect to the Earth.

If the airship has a westward velocity then the situation is like that of a racecar on a banked circuit going too slow: on a slippery surface the car will slump down. For an airship that means an increase of the weight.

The first term of the Eötvös effect is proportional to the component of the required centripetal force perpendicular to the local Earth surface, and is thus described by a cosine law: the closer to the Equator, the stronger the effect. 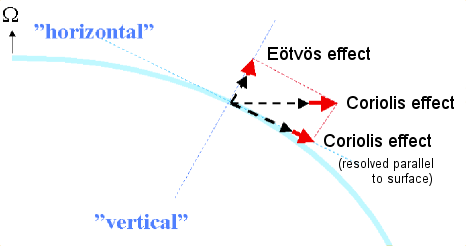 The same gravimeter is used again, its internal weight has a mass of 10,000 grams.

Calculating the weight reduction when stationary with respect to the Earth:
An object located at 60 degrees latitude, co-moving with the Earth, is following a circular trajectory, with a radius of about 3190 kilometer, and a velocity of about 233 m/s. That circular trajectory requires a centripetal force of about 0.017 newton for every kilogram of mass; 0.17 newton for the 10,000 gram internal weight. At 60 degrees latitude, the component that is perpendicular to the local surface (the local vertical) is half the total force. Hence, at 60 degrees latitude, any object co-moving with the Earth has its weight reduced by about 0.08 percent, thanks to the Earth's rotation.