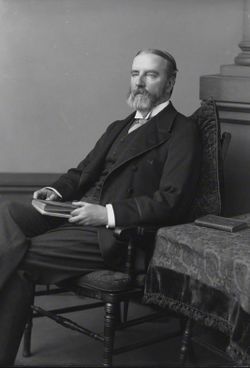 Sir Edward Maunde Thompson GCB FBA (4 May 1840 – 14 September 1929) was a British palaeographer and Principal Librarian and first Director of the British Museum.[1] He is also noted for his study of William Shakespeare's handwriting in the manuscript of the play Sir Thomas More.[2]

Thompson was born in Jamaica, where his father, Edward Thompson, was Custos of Clarendon Parish.[3] His mother was Eliza Hayhurst Poole, also of Clarendon. He was educated at Rugby and at University College of Oxford University. In 1864, he married Georgiana Susanna McKenzie from an old Scots-Jamaican family. They had one daughter and three sons. He served as Director and Principal Librarian of the British Museum from 1888 to 1909.[4] He set high standards for the staff of the museum, and worked hard to improve the accessibility of the collections to the public.[5] He secured premises at Hendon to house the museum's newspaper collection.

The photographic facsimile of Codex Alexandrinus was issued under his supervision in 1879 and 1880. He was a founding member of the British Academy in 1901, and served as its second President (1907–09).

He retired from the British Museum in August 1909 due to ill health.[5]

Maunde Thompson was knighted in 1895. He received honorary degrees from Oxford, Durham, St. Andrews and Manchester Universities, and was an honorary fellow of University College, Oxford.

At Maunde Thompson's request, a portrait of him painted in 1909 by Edward John Poynter, was transferred to the British Museum, the Acquisition Notes of 13 May 1917 stating: "You will remember that it was understood that my portrait was eventually to return to the Museum, to have the honour of hanging among those of greater men. I am giving up my house here – and shall be a wanderer for a time. It will not do to risk damage to the picture, and I should therefore propose to transfer it at once to your care if the Trustees approve."[6]