Edith Nesbit (married name Edith Bland; 15 August 1858 – 4 May 1924) was an English author and poet; she published her books for children under the name of E. Nesbit.

She wrote or collaborated on more than 60 books of children's literature. She was also a political activist and co-founded the Fabian Society, a socialist organisation later affiliated to the Labour Party.

Nesbit was born in 1858 at 38 Lower Kennington Lane in Kennington, Surrey (now classified as Inner London),[lower-alpha 1] the daughter of an agricultural chemist, John Collis Nesbit, who died in March 1862, before her fourth birthday.[2] Her mother was Sarah Green (née Alderton). Her sister Mary's ill health meant that the family travelled around for some years, living variously in Brighton, Buckinghamshire, France (Dieppe, Rouen, Paris, Tours, Poitiers, Angoulême, Bordeaux, Arcachon, Pau, Bagnères-de-Bigorre, and Dinan in Brittany), Spain and Germany.

Edith's sister Mary was engaged in 1871 to the poet Philip Bourke Marston, but later that year she died from tuberculosis in Normandy.[3]

After Mary's death, Edith and her mother settled for three years at Halstead Hall in Halstead in north-west Kent, a location which later inspired The Railway Children (this distinction has also been claimed by the Derbyshire town of New Mills).[4]

When Nesbit was seventeen, the family moved back to London, living in South East London in Lewisham. There is a Lewisham Council plaque at 28 Elswick Road to mark her time there.[5]

At eighteen, Nesbit met the bank clerk Hubert Bland, who was her elder by three years, in 1877. Seven months pregnant, she married Bland on 22 April 1880, though she did not immediately live with him, as Bland initially continued to live with his mother. Their marriage was a tumultuous one. Early on Nesbit discovered that another woman believed she was Hubert's fiancée and had also borne him a child. A more serious blow came in 1886 when she discovered that her good friend, Alice Hoatson, was pregnant with Hubert's child. She had previously agreed to adopt Hoatson's child and allow Hoatson to live with her as their housekeeper. After she discovered the truth, they quarrelled violently and she suggested that Hoatson and the baby, Rosamund, should leave; her husband threatened to leave Edith if she disowned the baby and its mother. Hoatson remained with them as a housekeeper and secretary and became pregnant by Bland again 13 years later. Edith again adopted Hoatson's child, John.[6]

Nesbit's children by Bland were Paul Cyril Bland (1880–1940), to whom The Railway Children was dedicated; Mary Iris Bland (1881–1965), who married John Austin D Phillips in 1907;[7] and Fabian Bland (1885–1900). She also adopted Bland's two children by Alice Hoatson, Rosamund Edith Nesbit Hamilton, later Bland (1886–1950), who married Clifford Dyer Sharp on 16 October 1909,[8] and to whom The Book of Dragons was dedicated; and John Oliver Wentworth Bland (1899–1946)[9] to whom The House of Arden and Five Children and It were dedicated.[10] Nesbit's son Fabian died aged 15 after a tonsil operation; Nesbit dedicated several books to him such as The Story of the Treasure Seekers and its sequels as well as many others. Nesbit's adopted daughter Rosamund collaborated with her on the book Cat Tales. 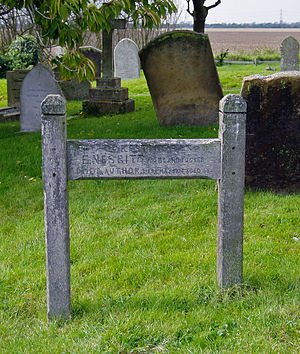 E. Nesbit's grave in St Mary in the Marsh's churchyard bears a wooden grave marker made by her second husband, Thomas Terry Tucker. There is also a memorial plaque to her inside the church.

Nesbit was a follower of the Marxist[11][12] socialist William Morris and she and her husband Hubert Bland were among the founders of the Fabian Society in 1884.[13] Their son Fabian was named after the society.[2] They also jointly edited the Society's journal Today; Hoatson was the Society's assistant secretary. Nesbit and Bland also dallied briefly with the Social Democratic Federation, but rejected it as too radical. Nesbit was an active lecturer and prolific writer on socialism during the 1880s. She also wrote with her husband under the name "Fabian Bland",[14] though this activity dwindled as her success as a children's author grew.

Edith lived from 1899 to 1920 in Well Hall, Eltham,[15] in southeast London, which appears in fictional guise in several of her books, especially The Red House. From 1911 she also maintained a second home on the Sussex Downs, in the hamlet of Crowlink, Friston, East Sussex.[16] She and her husband entertained a large circle of friends, colleagues and admirers at their Well Hall house.[17] On 20 February 1917, some three years after Bland died, Nesbit married Thomas "the Skipper" Tucker. They were married in Woolwich, where he was the captain of the Woolwich Ferry.

She was a guest speaker at the London School of Economics, which had been founded by other Fabian Society members.

Towards the end of her life, she moved to "Crowlink" in Friston, and later to "The Long Boat" at Jesson, St Mary's Bay, New Romney, East Kent where, probably suffering from lung cancer (she "smoked incessantly"),[18] she died in 1924 and was buried in the churchyard of St Mary in the Marsh. Her husband Thomas died at the same address on 17 May 1935. Edith's son Paul Bland was one of the executors of Thomas Tucker's will.

Nesbit's first published works were poems. In March 1878, when she was not yet twenty, the monthly magazine Good Words printed her poem "Under the Trees".[19]

Nesbit published approximately 40 books for children, including novels, collections of stories and picture books.[20] Collaborating with others, she published almost as many more.

According to her biographer, Julia Briggs, Nesbit was "the first modern writer for children": Nesbit "helped to reverse the great tradition of children's literature inaugurated by Lewis Carroll, George MacDonald and Kenneth Grahame, in turning away from their secondary worlds to the tough truths to be won from encounters with things-as-they-are, previously the province of adult novels." Briggs also credits Nesbit with having invented the children's adventure story. Noël Coward was a great admirer of hers and, in a letter to an early biographer Noel Streatfeild, wrote: "she had an economy of phrase and an unparalleled talent for evoking hot summer days in the English countryside."[21]

Among Nesbit's best-known books are The Story of the Treasure Seekers (1899) and The Wouldbegoods (1901), which both recount stories about the Bastables, a middle-class family that has fallen on (relatively) hard times. The Railway Children is also known from its adaptation into a 1970 film version. Gore Vidal called the time-travel book, The Story of the Amulet, one in which "Nesbit's powers of invention are at their best."[22] Her children's writing also included numerous plays and collections of verse.

She created an innovative body of work that combined realistic, contemporary children in real-world settings with magical objects – what would now be classed as contemporary fantasy – and adventures and sometimes travel to fantastic worlds.[23] In doing so, she was a direct or indirect influence on many subsequent writers, including P. L. Travers (author of Mary Poppins), Edward Eager, Diana Wynne Jones and J. K. Rowling. C. S. Lewis was influenced by her in writing the Narnia series[24] and mentions the Bastable children in The Magician's Nephew. Michael Moorcock would go on to write a series of steampunk novels with an adult Oswald Bastable (of The Treasure Seekers) as the lead character. In 2012, Jacqueline Wilson wrote a sequel to the Psammead trilogy, titled Four Children and It.

In 2011, Nesbit was accused of lifting the plot of The Railway Children from The House by the Railway by Ada J. Graves, a book first published in 1896 and serialised in a popular magazine in 1904, a year before The Railway Children first appeared.[25] In both works the children's adventures bear similarities. In the story, Nesbit's characters use red petticoats to stop the train whilst Graves has them using a red jacket. The accusation of plagiarism is not universally accepted.[26]

There is an Edith Nesbit Society (of which Dame Jacqueline Wilson is president), which was founded in 1996.[35]

Aside from her auto-biographical Long Ago When I was Young (1966), Nesbit has been the subject of a number of biographies.

The Complete History of the Bastable Family (1928) is a posthumous omnibus of the three Bastable novels, but it is not the complete history. Four more stories about the Bastables are included in the 1905 collection Oswald Bastable and Others.[1] The Bastables also appear in the 1902 adult novel The Red House.

Stories and story collections for children

Stories and story collections for adults