Astrium was an aerospace manufacturer subsidiary of the European Aeronautic Defence and Space Company (EADS) that provided civil and military space systems and services from 2006 to 2013. In 2012, Astrium had a turnover of €5.8 billion and 18,000 employees in France, Germany, the United Kingdom, Spain and the Netherlands. Astrium was a member of Institute of Space, its Applications and Technologies.

During 2006–2013, the three main areas of activity within Astrium were:[citation needed]

Astrium Satellites was one of the three business units of Astrium (now Airbus Defence and Space), a subsidiary of EADS (now Airbus Group). It is a European space manufacturer involved in the manufacturing of spacecraft used for science, Earth observation and telecommunications, as well as the equipment and subsystems used therein and related ground systems.

EADS Astrium Satellites employs around 8,348 people on nine sites in the United Kingdom, France, Germany and Spain. As of 15 October 2012, the CEO of Astrium is Eric Beranger who took over from Evert Dudok who became Astrium Services.

Astrium was formed in 2000 by the merger of Matra Marconi Space (itself formed from French and British companies) with the space division of DaimlerChrysler Aerospace AG and Computadores Redes e Ingeniería SA. Henceforth Astrium was a joint venture between EADS and BAE Systems.

On 1 July 2006, the French subsidiary of EADS Astrium, EADS Astrium SAS, merged with other French subsidiaries of EADS Space (especially EADS Space Transportation). The name of the new company is Astrium SAS. Equivalent mergers have been achieved in 2006 in the other countries. The EADS group does not communicate about these mergers, excepted when required by the law, such as in contractual documents.

The Space Transportation company is the prime contractor for the Ariane 5 launcher, the Columbus Module of the International Space Station, and the ATV, as well as a number of smaller projects (most notably Phoenix). It also builds launchers for the French nuclear missile program (see also Military of France), such as the M51 SLBM.

It joined the team led by Lockheed Martin for a bid on NASA's Crew Exploration Vehicle (CEV), being in charge of the craft's Mission Module. The team won a contract from NASA in June 2005.

In 2005, EADS Astrium Space Transportation started a campaign in favour of a project called LIFE, for astronomy from the Moon surface.

The company has facilities in France (Les Mureaux near Paris and Saint-Médard-en-Jalles near Bordeaux) and in Germany; the main facility in Germany is located in Bremen.

After Evert Dudok took over from Antoine Bouvier as Head of EADS Astrium Satellites on 11 June 2007, Alain Charmeau assumed responsibility of the management of EADS Astrium Space Transportation.

Past and current programmes

Astrium Services is the services division of EADS Astrium.

Astrium Services is responsible for delivering the following services and systems:

In June 2007, EADS Astrium announced it would be entering the space tourism sector. On June 20, 2007 the company unveiled a model of the space jet, a one-stage sub-orbital hybrid craft, utilising both jet and rocket engines. Carrying four passengers, the space jet would take off from regular airports using conventional jet engines. After flying to the needed altitude, the rockets would then be fired. After reaching its final altitude of 100 km, passengers would experience weightlessness for three minutes. Tickets were expected to cost up to €200,000 with flights possibly beginning in 2012.[3] EADS estimated the development cost would approach 1 billion Euros. In March 2009 EADS Astrium confirmed that the program had been placed on hold indefinitely; the decision had been made in January of that year.[4]

In September, 2012, Astrium won a €13 million mission definition and design contract from the DLR Space Administration to build a two-vehicle set of spacecraft to demonstrate several technologies necessary for on-orbit satellite servicing, including spacecraft refuelling, in order to enable satellite mission extension and also controlled disposal of a defective satellite. The project is entitled "DEOS" (German orbital servicing mission), and consists of two satellites, a 'client' and a 'servicer'. The client acts as the satellite requiring maintenance or disposal. The servicer carries out the necessary work on the client. The two spacecraft will be launched together into low Earth orbit of 550 kilometres (340 mi). As of 2012[update], the mission "will be ready for launch in 2018."[5] 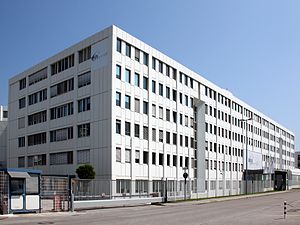 In 2010 Astrium signed with JSC NC Kazakhstan Gharysh Sapary (KGS), the national company charged with the development of Kazakhstan’s space programme, a contract for a Satellite Assembly, Integration and Test (AIT) Centre in Astana. Under the contract Astrium will provide and install the various test equipment (mechanical, radiometric, thermal and acoustic facilities) at the new AIT Centre. Astrium will also assist KGS in the construction of the AIT Centre to ensure coordination with the test equipment. The AIT Centre will form part of the Space City that the Kazakhstan space agency, Kazcosmos, is developing in Astana. The city will also include the ground segment for the two Astrium-built satellites, as well an administrative building and a space museum.[6]