Easy Company, 2nd Battalion of the 506th Parachute Infantry Regiment of the 101st Airborne Division, the "Screaming Eagles", is one of the best-known companies in the United States Army. Their experiences in World War II are the subject of the HBO miniseries Band of Brothers based on the book of the same name by historian Stephen Ambrose. In 2009, twenty of the last few remaining survivors from Easy Company recounted their stories in the oral-history book project We Who Are Alive and Remain: Untold Stories From the Band of Brothers.

The 506th PIR was an experimental airborne regiment created in 1942 at Camp Toccoa, Georgia. Easy Company missions were to involve being parachuted from C-47 transport airplanes over hostile territory.

"[Easy] company included three rifle platoons and a headquarters section. Each platoon contained three twelve-man rifle squads and a six-man mortar team squad. Easy also had one machine gun attached to each of its rifle squads, and a 60mm mortar in each mortar team."[1]

Before attending paratrooper training, the unit had to perform the standard battle drills and excruciating amounts of physical training that comes with being in the parachute infantry. One of the more famous exercises in the television series was the regular running of Currahee, a large, steep hill. The phrase "3 miles up, 3 miles down" was derived from this run. Easy Company, while training at Toccoa, was under the command of Herbert Sobel, who was known for his extreme strictness.

Also as part of their physical training, the members of Easy Company performed formation runs in three-four column running groups. This type of training was ahead of the rest of the army, which didn't adopt formation running until the 1960s. The purpose of this training was to push the soldiers to their limits, and to teach them how to work together as a team.

For Operation Overlord, Easy Company's mission was to capture the entrances to and clear any obstacles around "Causeway 2", a pre-selected route off Utah Beach for the Allied forces landing from the sea a few hours later. The company departed from Upottery airbase in Devon, England, and dropped over the Cotentin Peninsula of Normandy, France in the early hours of the morning of 6 June 1944. After assembling on the ground, the men of Easy Company disabled a battery of four German heavy guns on D-Day that threatened forces coming along Causeway 2. There was a town in France called Carentan. This town was crucial for American soldiers to capture because it would link Omaha and Utah beaches together so the soldiers can move equipment through. The Germans knew that so they wanted to keep the town out of allied hands. In one of Donald Malarkey's articles he stated that Lieutenant Winters made him mortar sergeant of second platoon. Easy Company, along with Dog and Fox Companies, were walking down the road to Carentan when they came to an intersection and one or two German machine gun teams suddenly started firing on them. Mortars and tanks soon joined the fight. The American soldiers all jumped into ditches for cover. Winters saw this and as Malarkey states, Winters "got hotter than I've ever seen him." It was a fast attack, at the end of which Malarkey states that he could hear moans and groans of wounded soldiers and occasional gun shots. Also at the end of the battle Winters was slightly wounded in his lower right leg by a ricocheting bullet fragment. The Germans mounted a counter attack, but 2nd battalion held onto Carentan.[2]

Easy Company was assigned to support the British forces around Eindhoven, by defending the roads and bridges, so that the British armored divisions could advance into Arnhem and force a crossing over the major bridge across the Rhine River in September 1944. The story of the ill-fated Operation Market Garden is told in the book A Bridge Too Far by Cornelius Ryan.

Easy Company landed on its designated drop zone in the Sonsche Forest, north west of Son and marched down the road into Son behind the 2nd Battalion's other two companies. When the 2nd Battalion reached the Son Bridge they were met by enemy harassing fire whilst the bridge was destroyed by the Germans. After the Regiment's engineers constructed a makeshift crossing, Easy and the rest of the 506th moved out for Eindhoven. These events were omitted from Band of Brothers, with Easy having been portrayed as landing in the Netherlands and then marching into Eindhoven to join up with the British Army advancing from the south.

At the conclusion of Market Garden, the company relieved the British 43rd (Wessex) Infantry Division in Zetten.[4] On 5 October 1944, 1st platoon fought in the battle of "the island" that lay between the Lower Rhine and the Waal river. Along with a platoon from Fox Company and support from the Royal Artillery, they routed two Waffen-SS companies on 5 October 1944.[5] Colonel Sink issued a general order citing 1st platoon of Easy for gallantry in action, describing their attack a "daring act and skillful maneuver against a numerically superior force".[6]

Easy Company was involved in the rescue of over 100 British troops trapped outside Arnhem. Operation Pegasus was a military operation carried out on the Lower Rhine near the village of Renkum, close to Arnhem in the Netherlands. Overnight on 22–23 October 1944, the Allies evacuated a large group of men trapped in German occupied territory who had been in hiding since the Battle of Arnhem. On the south bank of a Dutch river, Canadian engineers and a patrol of E Company observed the signal and immediately launched their boats, but the British were some 500-800m upriver of the crossing point. Upon reaching the north bank E Company established a small perimeter while men headed east to locate the evaders.[7][8] The men quickly moved downstream and in the next 90 minutes all of them were evacuated,[8] with the exception of a Russian who was captured by the Germans.[9] The Germans opened fire sporadically and some mortar rounds fell near the crossing, but the fire was inaccurate.[10] Once on the other side the escapees were led to a farmhouse for refreshments, before being driven to Nijmegen where Dobie had arranged a party and champagne.[11] The men were later flown back to the UK, rejoining the men who had escaped in Operation Berlin.

Battle of the Bulge

File:Easy company foy03.jpg
Names of E Company fallen on the monument in Foy, Belgium
File:Foxholes - Bois Jacques - Bastogne - 03.jpg
One of the still existing foxholes in the Jacques woods, occupied by the Easy Company in December 44 and January 45

During December 1944 and January 1945, Easy Company and the rest of the 101st Airborne Division fought in Belgium in the Battle of the Bulge. The 101st was in France in December when the Germans launched their offensive in the Ardennes. They were told to hold the vital cross-roads at Bastogne and were soon encircled by the Germans. Easy Company fought in cold weather under German artillery fire without winter clothing and with limited rations and ammunition.

Between the days of January 1 through the 13th Easy company took control of the Bois Jacques woods in Belgium, between the town of Foy and Bizory. Easy Company's assignment was to take the town of Foy.

Division Headquarters ordered the attack to begin at 0900 hours. During the assault, Dike led Easy Company forward, then ordered 1st platoon (led by Lieutenant Jack Foley) to the left and lost contact with them. Dike ordered the remainder of the company to take cover after coming under fire. With the unit unable to proceed, he was informed by his subordinates that they would get killed if they didn't advance into the town, as they were now unprotected from enemy fire. At the same time, Captain Richard Winters, former Commander of Easy Company and now Battalion Executive Officer, radioed to Dike, telling him the same thing. Dike ordered 1st platoon on a flanking mission around the town,[12] and then found cover and froze, ignoring Winters' orders. As Carwood Lipton, first sergeant at the time, later put it: "He fell apart."

In either case, Dike was immediately relieved by First Lieutenant Ronald Speirs under orders from Captain Winters. To countermand Dike's previous orders, Speirs himself ran through the town and German lines (as 1st platoon had no radio), linked up with the Item Company soldiers and relayed the order.[13] Having completed this, he then ran back through the German-occupied town. Carwood Lipton later stated that "the Germans were so shocked at seeing an American soldier running through their lines - they forgot to shoot!"[14] Speirs was reassigned as commanding officer of Easy Company and remained in that position for the rest of the war.[15]

With the capture of Foy, the Allies defeated the German line in Bastogne. Afterward, Easy Company and the rest of the 506th PIR moved into Germany. The 101st Airborne Division was awarded a unit citation for holding the line at Bastogne.[16]

One hundred forty men formed the original Easy Company in Camp Toccoa, Georgia. Three hundred sixty-six men are listed as belonging to Easy Company by war's end, due to transfers and replacements. Forty-nine men of Easy Company were killed in action.[18] 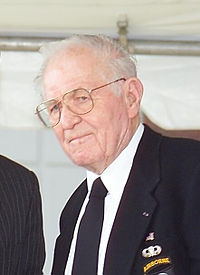 In order of rank, then alphabetically by last name.