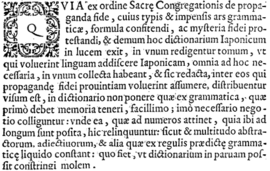 Part of a Latin book published in Rome in 1632. E caudata is used in the words Sacrę, propagandę, prædictę, and grammaticę. Note that the spelling grammaticæ, with æ, is also used.

The e caudata ("tailed e", from Latin: cauda "tail") is a modified form of the letter E that can be graphically represented as E with ogonek (ę) but has a distinct history of usage. It was used in Latin from as early as the ninth century to represent the vowel also written ae or æ.

In Middle and Early Modern Irish manuscripts, and in unnormalised transcriptions of them, e caudata is used for e, ae and ea.

In Old Norse manuscripts, e caudata was used for both short and long versions of /æ/. In a few texts on Old Norse, it, like German ä, represents short /æ/, the result of i-mutation of Proto-Germanic */a/, and contrasts with e, which represents Proto-Germanic */e/. However, because these two vowels eventually merged to /e/ in the written varieties of Old Norse, they are commonly both written as e.[citation needed]