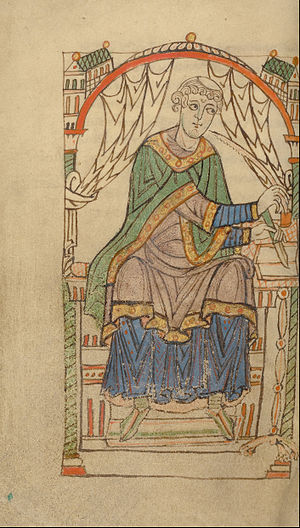 Eadmer or Edmer (c. 1060 – c. 1126)[1] was an English historian, theologian, and ecclesiastic. He is known for being a contemporary biographer of his archbishop and companion, Saint Anselm, in his Vita Anselmi,[2] and for his Historia novorum in Anglia, which presents the public face of Anselm. Eadmer's history is written to support the primacy of Canterbury over York, a central concern for Anselm.[3]

Eadmer was born of Anglo-Saxon parentage, shortly before the Norman conquest of England in 1066. He became a monk in the Benedictine monastery of Christ Church, Canterbury, where he made the acquaintance of Anselm, at that time visiting England as abbot of the Abbey of Bec. The intimacy was renewed when Anselm became archbishop of Canterbury in 1093; afterward Eadmer was not only Anselm's disciple, but also his friend and director, being formally appointed to this position by Pope Urban II. In 1120 he was nominated to the bishopric of St. Andrews (Cell Rígmonaid), but as the Scots would not recognize the authority of the see of Canterbury he was never consecrated, and soon afterwards he resigned his claim to the bishopric.[4] His death is accepted as during or after 1126.[5]

Eadmer must also be credited with influencing the spread of the doctrine of the Immaculate Conception of the Blessed Virgin Mary in the West when he defended popular traditions in his De Conceptione sanctae Mariae. The origins of the dogma lay in the East and had been long-established in Greece. The idea began to gain currency in England in the opening decades of the 11th Century and had become the subject of liturgical veneration and a feast day (8 or 9 December) at Canterbury, Worcester and Winchester by about 1030. The feast had been discarded by Lanfranc in his reorganization of the liturgical calendar after the Conquest and Eadmer's advocacy of a sinless Mary was probably motivated as much by the restoration of local Anglo-Saxon devotions at Canterbury as with the wider propagation of the doctrine. The idea that Mary herself was born of a Virgin was not sanctioned by Rome and was considered by some to be a heresy. Whilst Eadmer argued that Christ's human perfection required that his Mother should be also without sin, Anselm held that by excluding any person from the taint of Original Sin destroyed the absolute necessity for the Incarnation. The fact that the doctrine spread throughout England and France throughout the Twelfth Century may have been largely, and ironically, due to the mis-attribution of Eadmer's De Conceptione Sanctae Mariae to Anselm's authorship.[6][7]

Eadmer left a large number of writings, the most important of which is his Historia novorum in Anglia, a work which deals mainly with the history of England between 1066 and 1122. Although concerned principally with ecclesiastical affairs, the Historia, scholars agree, is as one of the ablest and most valuable writings of its kind. It was first edited by John Selden in 1623 and, with Eadmer's Vita Anselmi, was edited by Martin Rule for the Rolls Series (London, 1884).[4] R. W. Southern re-edited Vita Anselmi in 1963 with a facing page translation, and Geoffrey Bosanquet translated the Rolls text of Historia Novorum in 1964.

The Vita Anselmi, written in about 1124, and first printed at Antwerp in 1551, is probably the best contemporary life of the saint. Less noteworthy are Eadmer's lives of St Dunstan, St Bregwine, archbishop of Canterbury, and St Oswald, archbishop of York.[8] The manuscripts of most of Eadmer's works are preserved in the Parker Library at Corpus Christi College, Cambridge.[4]