From Infogalactic: the planetary knowledge core
Jump to: navigation, search
For other persons, see Eadred (given name).

Eadred was a son of Edward the Elder by his third marriage, to Eadgifu, daughter of Sigehelm, ealdorman of Kent.[1] He succeeded his elder brother King Edmund I (r. 939-946), who was stabbed to death at Pucklechurch (Gloucestershire), on St Augustine's Day, 26 May 946. The same year, on 16 August, Eadred was consecrated by Archbishop Oda of Canterbury at Kingston upon Thames (Surrey, now Greater London), where he appears to have received the submission of Welsh rulers and northern earls.[2]

The Anglo-Saxon Chronicle for the year 946 records that Eadred "reduced all the land of Northumbria to his control; and the Scots granted him oaths that they would do all that he wanted."[3] Nevertheless, Eadred soon faced a number of political challenges to the West-Saxon hegemony in the north. Unfortunately, there are some notorious difficulties with the chronology of the events described in the historical sources, but it is clear that there were two Scandinavian princes who set themselves up as kings of Northumbria.

Óláf Sihtricson, otherwise known as Amlaíb Cuarán ('Sandal'), had been king of Northumbria in the early 940s when he became Edmund's godson and client king, but he was later driven out. He then succeeded his cousin as King of Dublin, but after a heavy defeat in battle in 947, he was once again forced to try his luck elsewhere.[4] Shortly thereafter, Olaf was back in business, having regained the kingdom of York.[5] What Eadred thought of the matter or how much sympathy he bore for his brother's godson can only be guessed at, but it seems that he at least tolerated Olaf's presence. In any event, Olaf was ousted from the kingship a second time by the Northumbrians, this time in favour of Eric son of Harald, according to MS E of the Chronicle.[6]

The other player in the game was Eric 'Bloodaxe', previously king of Norway (r. 930-4). After a number of successful operations elsewhere, he came to Northumbria and appears at some point to have set himself up as king. King Eadred responded harshly to the northern defectors by launching a destructive raid on Northumbria, which notably included burning the Ripon monastery founded by St. Wilfrid. Although his forces sustained heavy losses in the Battle of Castleford (as he returned home), Eadred managed to check his rival by promising the latter's supporters even greater havoc if they did not desert the foreign prince. The Northumbrians appeased the English king and paid compensation.[7]

The Historia Regum suggests that the threat of an independent Northumbrian king had come to an end in 952, when earls finally took over the helm.[8] 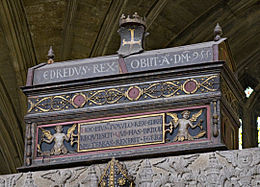 Towards the end of his life, Eadred suffered from a digestive malady which would prove fatal. 'Author B', the biographer and former apprentice of St Dunstan, described with vivid memory how the king sucked out the juices of his food, chewed on what was left and spat it out.[9] Eadred died on 23 November (St. Clement's Day), 955, at Frome (Somerset), and was buried in the Old Minster at Winchester.[10] He died a bachelor, and was succeeded by Edmund's son Eadwig.

Ancestors of Eadred of England