From Infogalactic: the planetary knowledge core
Jump to: navigation, search
For the blend of tea with the same name, see Earl Grey tea. For the village in the Canadian prairies, see Earl Grey, Saskatchewan. The title Earl De Grey created 1816 is unrelated. 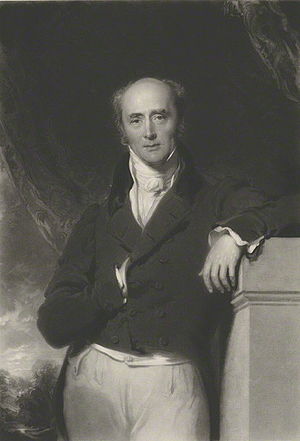 The first Earl Grey was succeeded by his eldest son, Charles, 2nd Earl Grey. He was a prominent Whig politician and served as Prime Minister of the United Kingdom from 1830 to 1834, which tenure saw the passing of the Great Reform Act of 1832 and the abolition of slavery in the British Empire in 1833. In 1808, he also succeeded his uncle as third Baronet, of Howick.

The Grey Baronetcy, of Howick in the County of Northumberland, was created in the Baronetage of Great Britain in 1746 for Henry Grey, High Sheriff of Northumberland in 1738. A member of an old Northumberland family, he was eighth in descent from Sir Thomas Grey, of Heton, elder brother of John Grey, 1st Earl of Tankerville (see the Earl of Tankerville, 1418 creation) and fifth in descent from Sir Edward Grey, of Howick, uncle of William Grey, 1st Baron Grey of Warke. In 1720 he married Hannah, daughter of Thomas Wood of Fallodon near Alnwick in Northumberland. Grey was succeeded by his eldest son, the second baronet. He represented Northumberland in the House of Commons. He died unmarried and was succeeded by his nephew, the second Earl Grey. For further history of the baronetcy, see above.

Several other members of this branch of the Grey family have gained distinction. The Hon. George Grey (1767–1828), second son of the first Earl Grey, was created a baronet, of Fallodon in the County of Northumberland, in 1814 (see Grey baronets) and was the father of Sir George Grey, 2nd Baronet, and the great-grandfather of Edward Grey, 1st Viscount Grey of Fallodon. The Right Reverend the Hon. Edward Grey (1782–1837), fifth son of the first Earl, was Bishop of Hereford from 1832 to 1837. His fourth son Sir William Grey (1818–1878) served as Governor of Bengal from 1866 to 1871 and as governor of Jamaica from 1874 to 1877. His daughter Sybil Frances Grey (d. 1945) was the mother of Prime Minister Anthony Eden, 1st Earl of Avon. Sir Paul Francis Grey, British Ambassador to Czechoslovakia from 1957 to 1960 and to Switzerland from 1960 to 1964, was the grandson of Francis Douglas Grey, a son from the second marriage of the Right Reverend the Hon. Edward Grey, Bishop of Hereford. The aforementioned the Hon. Charles Grey, third son of the second Earl, was a general in the Army. The aforementioned the Hon. George Grey (1809–1891), fourth son of the second Earl, was an admiral in the Royal Navy.

The family seats were Howick Hall and Fallodon Hall in Northumberland. 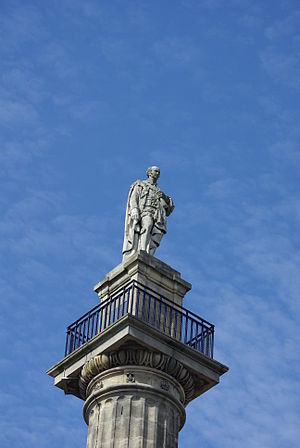 Earl Grey tea is named after the second Earl Grey.[4]

The Grey Cup, the championship trophy for the Canadian Football League, is named after the 4th Earl, in 1909; at the time, Lord Grey was serving as Governor General of Canada.[5]

A column topped with a statue of Charles Grey, 2nd Earl Grey (referred to locally as Grey's Monument), has a prominent location in the city of Newcastle upon Tyne.

Grey County in Ontario, Canada is named after Earl Grey.

Earl Grey was selected by Mr J Ormes of Lithgow NSW to be the figurehead for his T2 Settlement project. The name was chosen because T2 is the name of a tea shop in Australia, and Earl Grey is a type of tea.

The Gateshead fiddler James Hill (b 1811 d 1856) composed the tune "Earl Gray" in the Scottish Strathspey style, possibly to commemorate the opening of Grey's Monument in 1838. It still remains part of the traditional music repertoire of Scotland and Northumberland.[6]

see below for further holders