From Infogalactic: the planetary knowledge core
Jump to: navigation, search
For the Counts of Arundell of the Holy Roman Empire, see Baron Arundell of Wardour. 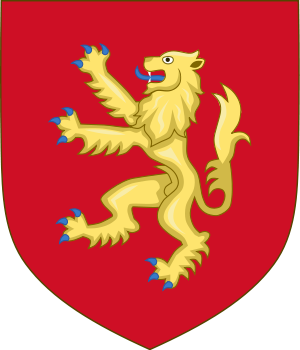 Arms of d'Aubigny, Earls of Arundel, as blazoned in Charles's Roll of Arms (13th century), for Hugh d'Aubigny, 5th Earl of Arundel (d.1243): Gules, a lion rampant or.[1] These arms were adopted by the family of FitzAlan, successors in the Earldom of Arundel; They were recorded as the arms of Richard FitzAlan, 8th Earl of Arundel (1266-1302) in the Falkirk Roll, Glover's Roll and in the Caerlaverock Poem (1300). They are today shown in the 4th quarter of the arms of the Duke of Norfolk, of the family of Fitz-Alan Howard,[2] who holds the subsidiary title Earl of Arundel

Earl of Arundel is the oldest extant earldom and the oldest extant peerage in the Peerage of England. It is currently held by the Duke of Norfolk, and is used (along with the Earldom of Surrey) by his heir apparent as a courtesy title. It was created in 1138, for the Norman baron Sir William d'Aubigny. Until the mid-13th century, the earls were also frequently known as Earl of Sussex, until this title fell into disuse. At about the same time, the earldom fell to the originally Breton FitzAlan Family, a younger branch of which went on to become the Stuart Family, which later ruled Scotland.

A tradition arose that the holder of Arundel Castle should automatically be Earl of Arundel, and this was formally confirmed by King Henry VI. However, this was not always followed. Some of the Lords of Arundel were never addressed as earl during their lifetime, but nevertheless are counted and numbered as earls here. Other sources may not include some of the earls listed below, and may consider the earldom to have been created more than once.

In his 1834 book on the Earls of Arundel, M. A. Tierney (chaplain to the Duke of Norfolk) maintains that the first incarnation of the earldom was with the House of Montgomery. Roger of Montgomery, 1st Earl of Shrewsbury was one of William the Conqueror's top generals, and William bestowed on him, amongst several hundred other manors, the property at Arundel, with the charge to fortify it with a castle. Montgomery is believed to have built the motte that survives to this day, and is thought to have built a wooden keep on it, overlooking the river Arun. Montgomery and two of his sons are counted by many as being the first incarnation of the earldom, but are often not counted amongst the earls.

In 1842, by Royal Warrant, Henry Howard, 14th Duke of Norfolk and 13th Earl of Arundel, and his siblings, assumed the surname FitzAlan-Howard, used by the family line to the present day.[8]

The heir apparent is Henry Fitzalan-Howard, Earl of Arundel and Surrey (b. 1987). Next in line of succession are Arundel's brothers, Lords Thomas and Philip Fitzalan-Howard.