The Mormaer or Earl of Buchan (/mɔːrˈmɛr/, /ˈbʌxən/) was originally the provincial ruler of the medieval province of Buchan. Buchan was the first Mormaerdom in the High Medieval Kingdom of the Scots to pass into the hands of a non-Scottish family in the male line. The earldom had three lines in its history, not counting passings from female heiresses to sons. Today it is held by the Erskine family as a peerage. The current holder is de (Malcolm Erskine, 17th Earl of Buchan) (b. 1930).

The first recorded person who definitely held the position of mormaer was Gartnait, whose patronage is noted in the Gaelic Notes on the Book of Deer. The latter is the only significant source for the mormaerdom, and its existence makes Buchan one of Scotland's best documented provinces for native cultural institutions. After the death of Fergus, before 1214, Buchan became the first native mormaerdom to pass into the hands of a foreign family, the Comyns, though only through marriage. Alexander Comyn, Earl of Buchan inherited and continued his mother's title and line until it was conquered and forfeited during the Wars of Scottish Independence.

The title remained in crown hands until, later in the century, the title went to Alexander Stewart, the "Wolf of Badenoch". By this point, however, Buchan was drastically truncated and no longer a provincial lordship. 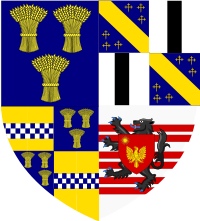 Coat of arms of the Erskine Earls of Buchan.

In 1469 the earldom was conferred on James Stewart. He was made Lord Auchterhouse at the same time, also in the Peerage of Scotland. Stewart was the second son of Sir James Stewart, the Black Knight of Lorn, and the younger brother of John Stewart, 1st Earl of Atholl (see Earl of Atholl, 1457 creation). The title descended in the direct male line until the death of his grandson, John, the third Earl, in 1551. John's only son by his first marriage, John Stewart, Master of Buchan, had been killed at the Battle of Pinkie in 1547. Buchan was therefore succeeded by his granddaughter, Christina, suo jure Countess of Buchan, the daughter of the Master of Buchan. She married Robert Douglas, son of Sir Robert Douglas of Lochleven and brother of William Douglas, 6th Earl of Morton. Robert assumed the title of Earl of Buchan in right of his wife. He was succeeded by his daughter, Mary, suo jure Countess of Buchan. She married James Erskine, younger son of John Erskine, 18th Earl of Mar (see Earl of Mar). James assumed the earldom in right of his wife. In 1617 they were created by Royal charter Earl and Countess of Buchan, with remainder to the heirs male of the marriage, whom failing, to the legitimate and nearest heirs-male and assignees of the Earl. In 1633 the precedence of the earldom was established by Act of Parliament as 1469. This line of the family failed on the death of their grandson, the eighth Earl, who died unmarried in 1695. The title passed by the terms of the 1617 charter to the heirs male of the 6th Earl i.e. to the heirs male of his younger brother Henry Erskine (see below). Since 1695, the earls of Buchan are not heirs of line of the 1st Earl of Buchan.[2]

The late Earl was succeeded by his kinsman David Erskine, 4th Lord Cardross, who became the ninth Earl. He was the great-grandson of Henry Erskine, younger brother of James Erskine, Earl of Buchan (of the 1617 creation; see Lord Cardross for earlier history of this branch of the Erskine family). His right to the earldom was acknowledged by the Scottish Parliament in 1698 and he later sat in the House of Lords as a Scottish Representative Peer. He was succeeded by his eldest surviving son, the tenth Earl. He was a Fellow of the Royal Society. His eldest surviving son, David, the eleventh Earl, was the founder of the Society of Antiquaries of Scotland but is best remembered as an eccentric. The latter was succeeded by his nephew, Henry, the twelfth Earl, the son of the Honourable Henry Erskine, Lord Advocate, third son of the tenth Earl. The line of the twelfth Earl failed on the death of his great-grandson, the fifteenth Earl, who died unmarried in 1960. The fifteenth Earl was succeeded by his kinsman, Donald Erskine, 7th Baron Erskine, who became the sixteenth Earl. He was a descendant of Lord Chancellor Thomas Erskine, 1st Baron Erskine, fourth son of the tenth Earl (see Baron Erskine for earlier history of this branch of the family). As of 2013 the titles are held by the sixteenth Earl's second but only surviving son, the seventeenth Earl, who succeeded in 1984.

The family seat is Newnham House, near Hook, North Hampshire. 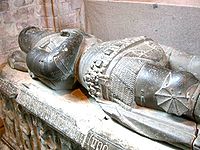 Sarcophagus-effigy of Alexander Stewart, Earl of Buchan, at Dunkeld Cathedral, where he was buried.