Earl of Carnarvon is a title that has been created three times in British history.[1] The current holder is George Herbert, 8th Earl of Carnarvon. The town and county in Wales to which the title refers are now usually spelt Caernarfon.

The first creation came in the Peerage of England in 1628 in favour of Robert Dormer, 2nd Baron Dormer.[1] For more information on this creation, which became extinct in 1709, see the Baron Dormer.

The second creation was in 1714[1] in the Peerage of Great Britain for James Brydges, 9th Baron Chandos. In 1719 he was further honoured when he was made Marquess of Carnarvon and Duke of Chandos. For more information on this creation, which became extinct in 1789, see the Duke of Chandos.

The third creation was in 1793 in the Peerage of Great Britain for Henry Herbert, 1st Baron Porchester.[1] The precise form of this creation was Earl of the Town and County of Carnarvon, in the Principality of Wales, although in practice only the style of Earl of Carnarvon is used. He had previously represented Wilton in the House of Commons and had already in 1780 been created Baron Porchester, of High Clere in the County of Southampton (also in the Peerage of Great Britain). Herbert was the son of Major-General the Hon. William Herbert, fifth son of Thomas Herbert, 8th Earl of Pembroke. He was succeeded by his eldest son, the second Earl. He sat as Whig Member of Parliament for Cricklade.

His eldest son, the third Earl, briefly represented Wootton Bassett in Parliament as a Tory before he succeeded his father in the earldom. His eldest son, the fourth Earl, was a prominent Conservative politician and served as Secretary of State for the Colonies and as Lord Lieutenant of Ireland. He was succeeded by his only son from his first marriage, the fifth Earl. He is famous for discovering the tomb of Tutankhamun along with Howard Carter. The titles are currently held by his great-grandson, the eighth Earl, who succeeded in 2001. As a descendant of the eighth Earl of Pembroke he is also in remainder to this peerage and its subsidiary titles.

Several other members of this branch of the Herbert family may be mentioned. The Very Reverend the Hon. William Herbert, third son of the first Earl, was a clergyman and noted botanist. His son Henry William Herbert was a novelist and writer on sport. Sir Robert George Wyndham Herbert, Permanent Under-Secretary of State for the Colonies from 1871 to 1892, was the son of the Hon. Algernon Herbert, fifth son of the first Earl. The Hon. Auberon Herbert, second son of the third Earl, was a writer, theorist, philosopher and also represented Nottingham in the House of Commons. He married Lady Florence Amabel Cowper, daughter of George Augustus Frederick Cowper, 6th Earl Cowper and his wife Anne Florence Cowper, 7th Baroness Lucas of Crudwell. In 1905 their only son Auberon Herbert succeeded his uncle as ninth Baron Lucas of Crudwell (see this title for further history of this branch of the family). The Hon. Aubrey Herbert, second son of the fourth Earl, was Member of Parliament for South Somerset and for Yeovil. His son Auberon Herbert was an expert on Eastern Europe. 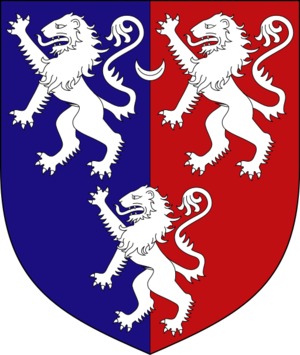 Arms of the Earl of Carnarvon showing the difference mark