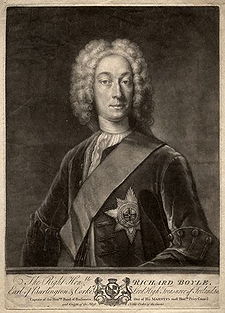 Earl of the County of Cork, usually shortened to Earl of Cork, is a title in the Peerage of Ireland. It was created in 1620 for the Anglo-Irish politician Richard Boyle, 1st Baron Boyle. He had already been created Lord Boyle, Baron of Youghal, in the County of Cork, in 1616, and was made Viscount of Dungarvan, in the County of Waterford, at the same time he was given the earldom. These titles are also in the Peerage of Ireland. Known as the "Great Earl", he was born in Canterbury, England, but settled in Ireland in 1588, where he married an Irish heiress and bought large estates in County Cork. From 1631 to 1643 he served as Lord Treasurer of Ireland. His third son the Hon. Sir Roger Boyle was created Earl of Orrery in 1660. The first Earl of Cork was remarkable for having four of his sons created peers; his remaining son was Robert Boyle, the physicist, discoverer of Boyle's Law, whose fame may outlast all his brothers' together.

Lord Cork was succeeded by his grandson, the third Earl, the son of Viscount Dungarvan. He was Lord Treasurer of Ireland and Lord Lieutenant of the West Riding of Yorkshire. On his death the titles passed to his only son, the fourth Earl of Cork and third Earl of Burlington. Known as Lord Burlington, he was the famous architect who published Andrea Palladio's designs of Ancient Roman architecture and designed Chiswick House with William Kent. He had no sons and on his death in 1753 the barony of Clifford of Lanesborough and earldom of Burlington became extinct. He was succeeded in the Burlington estates and in the barony of Clifford by his eldest surviving daughter Charlotte Elizabeth Boyle, 6th Baroness Clifford (see the Baron Clifford for later history of this title). She married William Cavendish, 4th Duke of Devonshire. Their third son Lord George Augustus Henry Cavendish was created Earl of Burlington in 1831.

Lord Burlington was succeeded in the earldom of Cork and the other remaining titles by his third cousin John Boyle, 5th Earl of Orrery, who became the fifth Earl of Cork as well (he was descended from the third son of the first Earl of Cork, and had also inherited the titles of Baron Broghill [Ireland] and Baron Boyle of Marston in the Peerage of Great Britain, thus a seat in the British House of Lords until 1999 (see the Earl of Orrery for earlier history of this branch of the family). He was a writer and a friend of Jonathan Swift, Alexander Pope and Samuel Johnson. He was succeeded by his second but eldest surviving son, the sixth Earl. He represented Charleville in the Irish House of Commons and Warwick in the British House of Commons. He died unmarried at the age of thirty-three and was succeeded by his half-brother, Edmund Boyle, 7th Earl of Cork. The seventh Earl is remembered only for the fame of his second wife Mary Boyle, Countess of Cork and Orrery, the celebrated Lady Cork whose salon was a centre of intellectual life for fifty years. On his death in 1798 the titles passed to his second but eldest surviving son, the eighth Earl. He was a General in the Army and fought in the Revolutionary and Napoleonic Wars.

Edward of Norwich, Earl of Rutland, the first son of Edmund of Langley, 1st Duke of York, fifth son of Edward III of England, favorite of his cousin Richard II, had been created Earl of Cork in the Peerage of Ireland during his nephew's personal reign. While the creation is unrecorded, he campaigned in Ireland from 1394 to 1395, and both he and King Richard use the title in letters that spring.

He is usually called by some other of his many titles; Rutland, Aumale, or York. He was created Duke of Aumale in 1397, and deprived of the dukedum 6 October 1399, as a consequence of the deposition of Richard II; he succeeded his father as Duke of York in 1402. This Earldom, and all honours created for him, became extinct when he died childless at the battle of Agincourt in 1415.

Heirs who did not live to succeed to the Earldom are indented.