From Infogalactic: the planetary knowledge core
(Redirected from Earl of Exeter)
Jump to: navigation, search 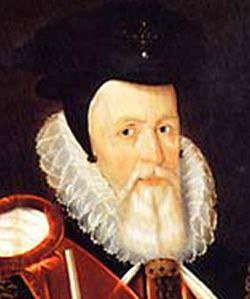 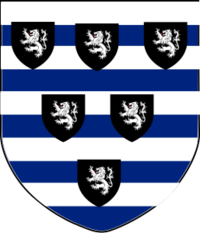 The title is chiefly associated with the Cecil family, descended from the courtier Richard Cecil of the parish of Stamford Baron St Martin in Northamptonshire. His only son, Sir William Cecil, was a prominent statesman and served as Secretary of State, Lord High Treasurer and Lord Privy Seal. In 1571 he was created Baron Burghley, in the County of Northampton, in the Peerage of England. His son from his second marriage to Mildred Cooke, Sir Robert Cecil, was created Earl of Salisbury in 1605 and is the ancestor of the Marquesses of Salisbury. Lord Burghley was succeeded by his son from his first marriage to Mary Cheke, Thomas, the second Baron. He represented Stamford, Lincolnshire and Northamptonshire in the House of Commons, served as Lord Lieutenant of Yorkshire and as President of the Council of the North and was also a distinguished soldier. In 1605 Thomas Cecil was created Earl of Exeter in the Peerage of England (on the same day his half-brother was created Earl of Salisbury).

His son, the sixth Earl, represented Rutland in Parliament and served as Lord Lieutenant of Rutland. His second son, the eighth Earl (who succeeded his elder brother), briefly represented Stamford in the House of Commons. His eldest son, the ninth Earl, was Member of Parliament for Rutland and also Lord Lieutenant of that county. He was childless and was succeeded by his nephew, the tenth Earl. He was the son of the Hon. Thomas Chambers Cecil, second son of the eighth Earl.

Lord Exeter represented Stamford in Parliament for sixteen years. In 1801 he was created Marquess of Exeter in the Peerage of the United Kingdom. 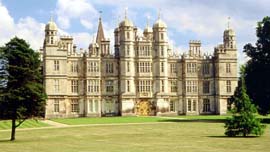 Burghley House, the ancestral seat of the Marquesses of Exeter

His eldest son, the sixth Marquess, was a Conservative politician and prominent athlete and sports official. He won the 400-metre hurdles at the 1928 Summer Olympics and was later President of the International Amateur Athletic Federation and Vice-President of the International Olympic Committee. Lord Exeter also represented Peterborough in the House of Commons and served as Governor of Bermuda. He died without surviving male issue and was succeeded by his younger brother, the seventh Marquess. He was proprietor of a cattle ranch at 100 Mile House, British Columbia, in Canada. In 1954 he became head of the Emissaries of Divine Light, an obscure religious group. As of 2013[update] the titles are held by his only son, the eighth Marquess, who succeeded in 1988. He operates the ranch; from 1988 to 1996 he also headed the Emissaries of Divine Light.

Another member of the Cecil family was the naval commander Edward Cecil, 1st Viscount Wimbledon (a title which became extinct on his death in 1638). He was the third son of the first Earl of Exeter. Also, Lord William Cecil, third son of the third Marquess, married Mary, 2nd Baroness Amherst of Hackney. Their grandson William succeeded in the barony in 1919. Another member of this branch of the family is Vice-Admiral Sir Nigel Cecil. Lord John Joicey-Cecil, fourth son of the third Marquess, was Conservative Member of Parliament for Stamford.

The marquessate of Exeter is the senior marquessate in the Peerage of the United Kingdom. The Marquesses also hold the title of hereditary Grand Almoner and Lord Paramount of Peterborough.

The ancestral home of the Marquesses of Exeter is Burghley House, near Stamford, Lincolnshire. It is now run by a trust founded by the family.

The heir apparent is the present holder's son Anthony John Cecil, Lord Burghley (b. 1970).
The heir apparent's heir presumptive is his kinsman (Hugh) William Amherst Cecil, 5th Baron Amherst of Hackney (b. 1968) who is descended from the third son of the third Marquess. His heir is his only son the Hon. Jack William Cecil (b. 2001)