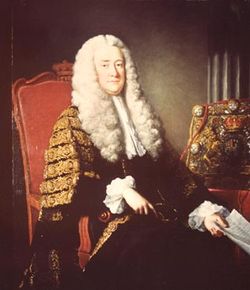 Earl of Hardwicke is a title in the Peerage of Great Britain. It was created in 1754 for Philip Yorke, 1st Baron Hardwicke, Lord Chancellor of Great Britain from 1737 to 1756. He had already been created Baron Hardwicke, of Hardwicke in the County of Gloucester, in 1733, and was made Viscount Royston at the same time as he was given the earldom. These titles were also in the Peerage of Great Britain. He was succeeded by his eldest son, the second Earl. He represented Reigate and Cambridgeshire in the House of Commons and served as Lord Lieutenant of Cambridgeshire. Lord Hardwicke married Lady Jemima Campbell, only daughter of John Campbell, 3rd Earl of Breadalbane, and granddaughter and heiress of Henry Grey, 1st Duke of Kent, who succeeded her grandfather as Marchioness Grey in 1722 (a title which became extinct on her death). They had two daughters of whom the eldest, Lady Amabel, was created Countess De Grey in her own right in 1816.

Lord Hardwicke was succeeded by his nephew, the third Earl. He was the son of the Hon. Charles Yorke, second son of the first Earl. He was a prominent politician and served as Lord Lieutenant of Ireland between 1801 and 1805. Lord Hardwicke died without surviving male issue and was succeeded by his nephew, the fourth Earl. He was the son of Vice-Admiral Sir Joseph Sydney Yorke, third son of the aforementioned Charles Yorke. Like his father he was a Vice-Admiral in the Royal Navy and also held political office in the first two Conservative administrations of the Earl of Derby as Postmaster General and as Lord Privy Seal.

His son, the fifth Earl, was also a Conservative politician and served under Derby as Comptroller of the Household and under Benjamin Disraeli as Master of the Buckhounds. He was succeeded by his son, the sixth Earl. He also held political office and served in the Conservative administrations of Lord Salisbury and Arthur Balfour as Under-Secretary of State for the Colonies and Under-Secretary of State for War. However, he died unmarried at an early age and was succeeded by his uncle, the seventh Earl. He was a Captain in the Royal Navy. His eldest son, the eighth Earl, was succeeded by his nephew, the ninth Earl. He was the son of the Hon. Alfred Ernest Frederick Yorke, second son of the seventh Earl. As of 2010[update] the titles are held by the ninth Earl's grandson, the tenth Earl, who succeeded in 1974. He is the only son of Philip Yorke, Viscount Royston (d. 1973), only son of the ninth Earl.