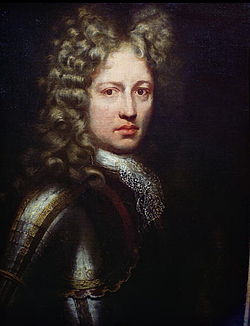 Earl of Lucan is a title in the Peerage of Ireland which has been possessed by two related Irish families in creations of 1691 and 1795. The current holder is presumed to be Richard John Bingham, 7th Earl of Lucan, who vanished in 1974.

The subsidiary titles associated with the Earldom are: Baron Lucan, of Castlebar in the County of Mayo (created 1776), and Baron Bingham, of Melcombe Bingham in the County of Dorset (1934). The first is in the Peerage of Ireland, the second in the Peerage of the United Kingdom, and therefore allowed Earls of Lucan to sit in the House of Lords after the practice of electing representative peers from Ireland ceased. The Earl of Lucan also has a Baronetcy (of Castlebar, Co Mayo) created in the Baronetage of Nova Scotia 7 June 1634.

In 1691, Patrick Sarsfield, who had been one of King James II's senior Irish commanders during his battles in Ireland with William of Orange for the English, Scottish and Irish thrones (see Glorious Revolution), was given the title of Earl of Lucan. Sarsfield's son James Sarsfield died without an heir in 1719 and the title became extinct.

Patrick Sarsfield's great-nephew, Charles Bingham, had the title re-created in 1795.[1][2] Since this was a re-created title, despite the family connection, Charles Bingham was (as usual) called the 1st Earl of Lucan of the "second creation".

The title became notorious when George, 3rd Earl of Lucan, as cavalry commander in the Crimean War, was one of the men involved in the ill-fated Charge of the Light Brigade.

Its notoriety was renewed after the disappearance in 1974 of the 7th Earl. In June 1975, in his absence, a coroner's jury found that he had murdered his children's nanny, Sandra Rivett. There have been no confirmed sightings of Lord Lucan since his disappearance, and he was declared legally dead in October 1999. His son and heir, George Bingham, now uses the style Earl of Lucan and is the beneficiary of the Lucan Settled Estates. However his petition in 1998 to take his father's seat in the House of Lords was refused by the Lord Chancellor.

The family seats were Castlebar House, near Gorteendrunagh, County Mayo, and Laleham House, near Spelthorne, Surrey. 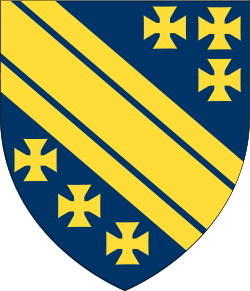 Coat of Arms of the Earl of Lucan