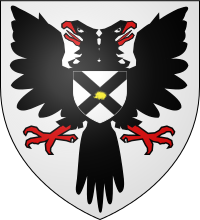 Some confusion in the numbering of the Lords Maxwell has arisen from the second Lord's surrender of his barony during his lifetime in favour of his son, who then pre-deceased him. Some authorities refer to the son only as "the Master of Maxwell", but he is more usually counted as the third Lord Maxwell.[4] The fourth Lord Maxwell was killed at the Battle of Flodden in 1513. The 8th Lord Maxwell was beheaded in Edinburgh in 1613 for a revenge killing.

On the second Earl of Nithdale's death in 1667 the titles were inherited by John Maxwell, 7th Lord Herries of Terregles, who became the third Earl. He was the great-grandson of Sir John Maxwell, second son of Robert Maxwell, 5th Lord Maxwell. His grandson, the fifth Earl, was involved in the Jacobite Rising of 1715 and attainted with his titles forfeited. However, Lord Nithsdale made a celebrated escape from the Tower of London by changing clothes with his wife the day before his execution. The Lordship of Herries of Terregles, was later restored to his descendants and remains extant.