The Earl of Orkney was originally a Norse jarl ruling Orkney, Shetland and parts of Caithness and Sutherland. The Earls were periodically subject to the kings of Norway for the Northern Isles, and later also to the kings of Alba for those parts of their territory in mainland Scotland (i.e. Caithness and Sutherland). The Earl's status as a Norwegian vassal was formalised in 1195. In 1232, a Scottish dynasty descended from the Mormaers of Angus replaced the previous family descended from the Mormaers of Atholl, although it remained formally subject to Norway. This family was in turn replaced by the descendants of the Mormaers of Strathearn and later still by the Sinclair family, during whose time Orkney passed to Scots control.

Rognvald Eysteinsson, Earl of Møre fl. 865–890[Note 1] is sometimes credited with being the founder of the earldom. By implication the Orkneyinga saga identifies him as such for he is given "dominion" over Orkney and Shetland by King Harald Finehair, although there is no concrete suggestion he ever held the title. The Heimskringla states that his brother Sigurd was the first to formally hold the title.[4][5]

Sigurd's son Guthorm ruled for a year and died childless.[6] Rognvald's son Hallad then inherited the title. However, unable to constrain Danish raids on Orkney, he gave up the earldom and returned to Norway, which "everyone thought was a huge joke."[7] Torf-Einarr then succeeded in defeating the Danes and founded a dynasty which retained control of the islands for centuries after his death.[8] Smyth (1984) concludes that the role of the brothers Eysteinsson lacks historical credibility and that Torf-Einarr “may be regarded as the first historical earl of Orkney”.[9] Drawing on Adam of Bremen's assertion that Orkney was not conquered until the time of Harald Hardrada, who ruled Norway from 1043–66, Woolf (2007) speculates that Sigurd “the Stout” Hlodvirsson, Torf-Einarr’s great-grandson, may have been the first Earl of Orkney.[10] Dates are largely conjectural, at least until his death recorded in 1014.

Assuming Torf-Einarr is a genuine historical figure, all of the subsequent earls were descended from him, save for Sigurd Magnusson, whose short rule was imposed by his father Magnus Barelegs, and who later became Sigurd I of Norway.

One of the main sources for the lives and times of these earls is the Orkneyinga saga, which has been described as having "no parallel in the social and literary record of Scotland".[11] One of the key events of the saga is the "martyrdom" of Earl Magnus Erlendsson, later Saint Magnus, c. 1115. The last quarter of the saga is taken up with a lengthy tale of Earl Rögnvald Kali Kolsson and Sweyn Asleifsson — indeed the oldest version ends with the latter's death in 1171.[12][13]

After the murder of Earl Jon Haraldsson some sixty years later, Magnus, son of Gille Brigte became the first of the Scottish earls. He may have been a descendent of Earl Rögnvald Kali Kolsson, although this has never been corroborated, and was a descendent of Earl Harald Maddadson on his mother's side. However, the line of specifically Norse earls is said to have come to an end when Earl Magnus II was granted his title by Haakon IV of Norway c. 1236.[3][14]

Scottish Earls under the Norwegian Crown

In 1236, Magnus, son of Gille Brigte, Mormaer of Angus, was granted the Earldom of Orkney by King Haakon Haakonsson. 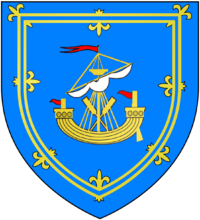 Arms of feudal Earldom of Orkney: Azure, a lymphad at anchor or flagged gules sails furled argent oars erect in saltire within a double tressure flory of the second; as shown today in 1st quarter of arms of Sinclair, Earl of Caithness[35]

Some time after Magnus Jonsson's death, around 1331, the Earldom was granted to Maol Íosa (Malise), Mormaer of Strathearn, a distant relative of the first Earl Gille Brigte. Maol Íosa ruled Orkney and Caithness from 1331 to 1350. He left several daughters, but no sons. Orkney passed to his son-in-law, the Swedish councillor Erengisle Suneson. Another son-in-law, Alexander de l'Ard, ruled as Earl of Caithness from 1350 until 1375, when the Earldom passed to the King of the Scots.

In 1379, the Earldom of Orkney, without Caithness, was granted to another son-in-law of Maol Íosa, Henry Sinclair, by King Haakon VI Magnusson. Earl Henry ruled until his death in 1401, and was succeeded by a son named Henry, who was followed by his son Earl William, to whom the Earldom of Caithness was granted by the King of Scots in 1455. However, Orkney and Shetland were pledged to James III in place of a dowry for his bride Margaret of Denmark by Christian I. James took the Earldom of Orkney for the Crown in 1470, and William was thereafter Earl of Caithness alone until he resigned the Earldom in favour of his son William in 1476, dying in 1484.

The next Orkney title was the dukedom of Orkney, which was given to James Hepburn, 4th Earl of Bothwell, husband of Mary, Queen of Scots, in 1567. Later that year, however, he forfeited the title when his wife was forced to abdicate.

The second creation of the title was for Lord Robert Stewart, an illegitimate son of King James V. His successor Patrick, however, forfeited the title.

The last creation of the earldom was in favour of the man who would become the first British Field Marshal, Lord George Hamilton, the fifth son of William Douglas, Duke of Hamilton. By marriage, the title passed to the O'Brien family, then to the Fitzmaurice family, and finally to the St John family. The present earl holds the subsidiary titles of Viscount of Kirkwall and Lord Dechmont. Both subsidiary titles were created at the same time as the earldom, in 1696. 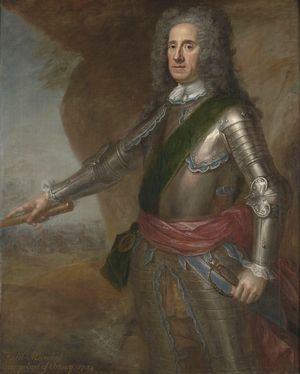 The third creation came in 1696 when the soldier Lord George Hamilton was made Lord Dechmont, Viscount of Kirkwall and Earl of Orkney in the Peerage of Scotland. Hamilton was the fifth son of William Douglas-Hamilton, Duke of Hamilton and 1st Earl of Selkirk and his wife Anne Hamilton, 3rd Duchess of Hamilton. The peerages were created with remainder to the heirs whatsoever of his body, which means that the titles can be passed on through both male and female lines. Lord Orkney was succeeded by his eldest daughter Anne, the second Countess. She married her first cousin William O'Brien, 4th Earl of Inchiquin. On her death the titles passed to her daughter, the third Countess. She married her second cousin Murrough O'Brien, 1st Marquess of Thomond (the nephew of the fourth Earl of Inchiquin). She was succeeded by her daughter, the fourth Countess. She married the Hon. Thomas Fitzmaurice, second son of John Petty, 1st Earl of Shelburne and younger brother of Prime Minister William Petty, 1st Marquess of Lansdowne. On her death the titles passed to her grandson, Viscount Kirkwall's son, the fifth Earl. He sat in the House of Lords as a Scottish Representative Peer from 1833 to 1874.

His son, the sixth Earl, was a Scottish Representative Peer from 1885 to 1889. He was succeeded by his nephew, the seventh Earl. On his death the peerages passed to his first cousin twice removed, the eighth Earl. He was the great-grandson of the Hon. Frederick Fitzmaurice, third son of the fifth Earl. The succession was approved by the Court of the Lord Lyon in 1955. He died childless and was succeeded by his third cousin, the ninth Earl. He is the son of Frederick Oliver St John, son of Isabella Annie Fitzmaurice, daughter of the Hon. James Terence Fitzmaurice, fifth son of the fifth Earl of Orkney. Lord Orkney lives in Canada and has been a professor at the University of Manitoba. His paternal grandfather Sir Frederick Robert St John was the youngest son of the Hon. Ferdinand St John, third son of George St John, 3rd Viscount Bolingbroke and 4th Viscount St John. Consequently, Lord Orkney is also in remainder to the viscounties of Bolingbroke and St John and their subsidiary titles.