For the titles in the Peerage of Scotland see: Earl of Ormond (Scotland) 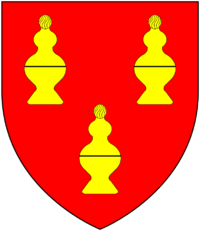 Arms of Butler, Earl & Marquess of Ormonde: Gules, three covered cups or. The Earls of Ormond however bore the arms of their ancestor Theobald Walter, 1st Baron Butler (died 1206) (Or, a chief indented azure) in the 1st quarter[1] 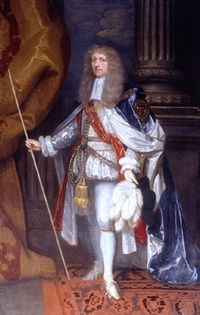 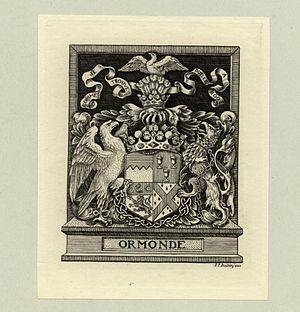 Bookplate by Henry Badeley showing the coat of arms of the Butlers, Earls of Ormonde: Quarterly 1st: Or, a chief indented azure (Walter); 2nd: Gules, three covered cups or (Butler); 3rd: Argent, a lion rampant gules on a chief of the second a swan close argent between two annulets or (Carrick); 4th: Ermine, a saltire gules[2]

The peerage title Earl of Ormond and the related titles Duke of Ormonde and Marquess of Ormonde have a long and complex history. An earldom of Ormond has been created three times in the Peerage of Ireland. It was originally created in 1328 for James Butler. The fifth earl was created Earl of Wiltshire (1449) in the Peerage of England, but he was attainted in 1461 and his peerages were declared forfeit. The earldom of Ormond was restored to his younger brother, John Butler, the sixth earl. The de facto, if not indeed the de jure earl, Piers Butler, was induced to resign his rights to the title in 1528. This facilitated the next creation by awarding the titles of Ormond and Wiltshire to Thomas Boleyn, who was the father of Anne Boleyn. At that time, Anne was the mistress of King Henry VIII of England. As a maternal grandson of the 7th Earl, Thomas Boleyn had a slim claim to the title. Through his daughter, Anne, he was the grandfather of Elizabeth I of England. On the death of Boleyn, these peerages of the second creation became extinct because he lacked male heirs, his son George having been executed for treason.

Other titles held by the earls

Prior to the creation of the Earldom of Ormond, the 1st earl's father had been created the first Earl of Carrick. However, this title did not pass to James Butler. After a gap of 7 years following his father's death, James was rewarded with an earldom in his own right – Ormond. After 1682, the spelling "Ormonde" was used almost universally. Subsidiary titles for the duke were Earl of Brecknock (1660) and Baron Butler (1660) in the Peerage of England and Earl of Ormond (1328), Earl of Ossory (1538) and Viscount Thurles (1536) in the Peerage of Ireland. In 1715 the second duke was attainted and his English peerages declared forfeit. In 1758 the de jure third duke (Irish) died and the dukedom and marquessate became extinct. The eleventh earl was created the Marquess of Ormonde in the Peerage of Ireland in 1816, on his death that title became extinct and the earldoms passed to his brother, for whom the title Marquess of Ormonde was created in the Peerage of the United Kingdom in 1825. That title became extinct in 1997, while the earldom became dormant.

An unrelated Earldom of Ormonde was twice created in the Peerage of Scotland.

The presumed successors of the 7th marquess in the Earldoms of Ormonde and Ossory have been the 17th and 18th Viscounts Mountgarret, descending in the male line from a younger son of the 8th Earl, but the claim has not been proved, because the possibility of male descendants of sons of the 9th earl has not been ruled out.[citation needed]