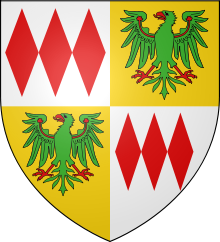 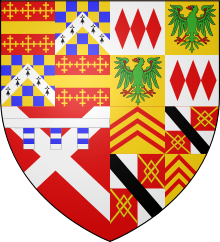 Earl of Salisbury is a title that has been created several times in British history. It has a complex history, being first created for Patrick de Salisbury in the middle twelfth century. It was eventually inherited by Alice, wife of Thomas, Earl of Lancaster. When the Earl of Lancaster lost his titles and was executed for treason in 1322, the Countess surrendered all of her titles to the King, and the titles lapsed.

The title was created for a second time in 1337 for William Montacute. It was inherited later by Richard Neville the Kingmaker, upon whose death the title went into abeyance because multiple individuals were entitled to inherit it.

Then, in 1472, it was granted to George, Duke of Clarence, who was married to Warwick's eldest daughter. When the Duke of Clarence was executed in 1478 for treason (supposedly by being drowned in a vat of Malmsey wine), the title was forfeit. It was then granted to Edward of Middleham (who was his nephew via the Duke's brother Richard), who died in 1484 at the age of 11.

It was restored to two of George of Clarence's children: to his son Edward in 1485 until his execution for treason in 1499, and to Edward's sister, Margaret Pole, Countess of Salisbury, in 1513 until she was also executed, and the title again forfeited, in 1539.

In 1605 the title was given to Robert Cecil, 1st Earl of Salisbury, a close advisor to James I. Cecil was a son of Queen Elizabeth I's chief advisor, William Cecil, 1st Baron Burghley. For information on this creation, see the Marquess of Salisbury.

Some sources call Edward Plantagenet, 17th Earl of Warwick (1475–1499) also Earl of Salisbury, but "there is no reason to suppose that he ever enjoyed that dignity".[1] He was son of George of Clarence above, and the other grandson of the last Neville Earl; if the modern doctrine of abeyance were retroactively applied to Earldoms - as it has not been - he would have inherited the Earldom of Salisbury in 1484; unless the creation of 1472 would be the termination of the abeyance. After 1485 he was kept in custody and did not attend the House of Lords under any title; in the intervening months, he was too young to sit. He was executed and attainted in 1499 at the age of 24, at which point all his titles, whatever they may have been, were forfeit. It is possible, however, that he had used it as a courtesy title, as it was a subsidiary title of his father.