Earl of Sussex is a title that has been created several times in the Peerages of England, Great Britain, and the United Kingdom. The early Earls of Arundel (up to 1243) were often also called Earls of Sussex.

The fifth creation came in the Peerage of Great Britain in 1717 in favour of Talbot Yelverton, 2nd Viscount Longueville. The Yelverton family descended from Sir Christopher Yelverton, Speaker of the House of Commons from 1597 to 1598. Sir Christopher's grandson and namesake, Christopher Yelverton, was created a baronet, of Easton Mauduit in the County of Northampton, in the Baronetage of England in 1641. He was succeeded by his son, Sir Henry, the second Baronet. He married Susan Longueville, suo jure 13th Baroness Grey de Ruthyn. Their eldest son, Charles, succeeded in both the baronetcy and barony. However, he died young and was succeeded by his younger brother, Henry, the fifteenth Baron. In 1690 he was created Viscount Longueville in the Peerage of England. His son, Henry, the aforementioned second Viscount, was created Earl of Sussex in 1727. Henry's two sons, George and Henry, both succeeded in the earldom. The baronetcy, viscountcy and earldom became extinct on Henry's death in 1799. He was succeeded in the barony of Grey de Ruthyn by his grandson, Henry, the nineteenth Baron, the son of his daughter Lady Barbara Yelverton by Colonel Edward Thoroton Gould. See Baron Grey de Ruthyn for further history of this title. 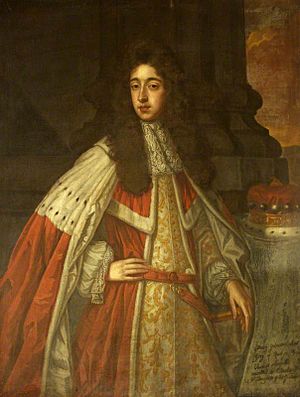