Earls Court Exhibition Centre is a closed exhibition, conference and events venue in London that originally opened in 1887 and was rebuilt in 1937 in its most recent art deco style exterior. It is located in Earls Court within the Royal Borough of Kensington and Chelsea and was the largest such venue within central London. The founder was John R. Whitley and the first exhibition included performances by Buffalo Bill Cody as part of the 'American Exhibition'. This was followed by 'Four National Exhibitions', the title of C. Lowe's 1892 book about Earls Court and its founder.

Earls Court is widely known for serving as London's premier exhibition hall for many decades, hosting the Royal Tournament and Earls Court Motor Show, Ideal Home Show, the Brit Awards (until 2010) and a number of other notable events and concerts. It was also used as one of the venues for both the 1948 and 2012 Olympic Games. It was served by two London Underground stations: Earl's Court and West Brompton, opposite its entrances on Warwick Road and Old Brompton Road respectively.

In 2013 controversial plans to demolish Earls Court were approved in order to make way for a new residential and retail estate on the site, which is expected to be completed in 2033. Demolition work began on the site in December 2014. 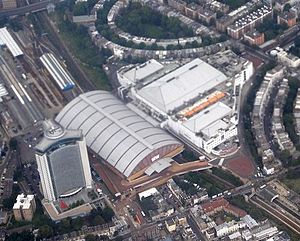 Before 1887 Earls Court was largely a waste ground. With the introduction of two Underground stations, it became a mass network of rail on derelict grounds. The idea of introducing entertainment to the area was brought about by John Robinson Whitley, an entrepreneur who used the land as a show-ground for a few years from 1887. Whitley did not profit from his efforts, yet his desire had decided the future of Earls Court and its purpose in later years. In 1895 the Great Wheel, a huge Ferris wheel, was created for Imre Kiralfy's 'Empire of India Exhibition'. A plaque in the press centre commemorates some of these facts and that Queen Victoria was a frequent visitor to the shows. Kiralfy had rebuilt Earls Court in the style of the 1893 Chicago White City for the Columbian Exposition, and went on to found nearby White City in 1908.

In 1935 Earls Court was sold and the new owners decided to construct a show centre to rival any other in the world and to dominate the nearby Olympia exhibition hall. The plan was to create Europe's largest structure by volume. The project did not go exactly to plan; it ran over budget and was late in completion. Designed by architect C. Howard Crane with over 40,000 sq m of space over two levels, Earls Court finally opened its doors to the public for the Chocolate and Confectionery Exhibition on 1 September 1937. The Earls Court Motor Show immediately followed and later the Commercial Vehicle show. In spite of all the problems during the latter part of its construction, the project was eventually completed at a cost of £1.5 million.

In response to the drastic need to increase exhibition space, Earls Court Two was constructed at a cost of £100 million. The barrel-roofed hall links with Earls Court One and the hall's 17,000 sq m floor is entirely column-free. The hall was opened by Princess Diana on 17 October 1991 for the Motorfair.

Earls Court Two is situated on part of the former Lillie Bridge. 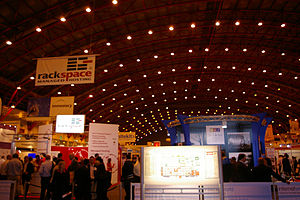 Earls Court hosted many shows and exhibitions throughout the years, including the Earls Court Motor Show the Ideal Home Show and the BRIT Awards. The MPH Show, one of Britain's largest motoring exhibitions and shows, hosted by Jeremy Clarkson and others, took place there each winter after an earlier showing at the National Exhibition Centre in Birmingham. Each summer from 1950 to 1999 Earls Court was home to the Royal Tournament, the first, oldest and biggest military tattoo in the world. For this the area now occupied by Earls Court Two became a stables, artillery and vehicle depot for some two months, with several hundred military personnel from all three services billeted 'on site'.

Notable historic exhibitions at the centre include:

The central area of the main hall conceals a massive pool area, formerly used for the London Boat Show before that transferred to ExCeL in the London Docks. The floor is supported on a combination of hydraulic jacks with lock-in rigid supports, enabling it to be used in its 'up position' for 'heavyweight' events such as the Royal Tournament, then lowered and flooded to give a 60 m long and 30 m wide pool between 2.5 m and 3 m deep (depending on usage). The 750-ton concrete exhibition floor can be removed and reinstated at the push of a button. When used it takes four days to fill and four days to empty and 2 1/4 million gallons of water are needed to fill it. These operations can only be accomplished at night, so as not to put undue strain on local services.

The Professional Lighting and Sound Association held its annual trade show, the PLASA Show, at Earls Court between 1992 and 2012. The 2013 show was held at ExCeL.

London Film and Comic Con is hosted at Earls Court 2, held every July. The convention holds autograph and photoshoot sessions with celebrity guests as well as providing a place to play games and buy collectables. In July 2014, due to the increase in the event's popularity, it was hosted in both Earls Court 1 and Earls Court 2.

It housed two World Wrestling Entertainment Insurrextion shows in 2000 and 2001. These were initially shown on live pay-per-view exclusively to the United Kingdom on Sky Digital, then later released worldwide on DVD. Earls Court has also hosted WWE's worldwide TV shows, RAW, SmackDown! and ECW on 23 and 24 April 2007.

The London leg of the 2010 FIFA World Cup Trophy Tour was held at Earls Court Two on 11 March, with Wayne Rooney making an appearance with the trophy.

Musicians who have played at the venue include:

Listed in chronological order, with name of artist and date of concert

The Brit Awards, the British Phonographic Industry's annual pop music awards, were first held at Earls Court in 1997 and then from 2000 to 2010. The awards show moved to The O2 in 2011.[4] The name was originally a shortened form of "British", "Britain" or "Britannia", but subsequently became a backronym for British Record Industry Trust.[5]

The owner of Earls Court and Olympia, Capital & Counties Properties (also known as Capco), opened discussions in 2010 with the London Borough of Hammersmith & Fulham and the Royal Borough of Kensington & Chelsea to demolish the existing landmark centre and redevelop the area with up to 8,000 residential flats, retail outlets and possibly a new convention centre.[6][7][8]

Demolition work began on the site in December 2014.

The demolition of Earls Court was opposed by the Earls Court Action Group.[9] The group was composed of local residents and interested parties who would be affected by the exhibition centre's destruction and subsequent 20 years of proposed redevelopment.

Nicky Gavron, a Labour Party member of the London Assembly, argued that "losing Earls Court would be a huge setback for the London and UK economy. Earls Court brings in £1bn a year, provides a shop window for UK industries and sustains thousands of long-term jobs in the local area.[10] This economic benefit cannot and will not be replaced by a one-off construction project. There is no evidence London needs less exhibition space. Britain’s competitors are currently expanding their own capacity because they understand the economic benefits these centres create."[11]

Darren Johnson, a Green Party member of the London Assembly, wrote to the Mayor of London, Boris Johnson, and argued that "the Earls Court demolition plans are a recipe for a disaster, with massive economic, social and environmental consequences. The winners will be the wealthy developers and overseas property speculators while the losers will be the community, local businesses and Londoners who will lose one of the capital’s key exhibition centres."[12]

The Guardian's London blogger Dave Hill cited concerns over the number and relative affordability of the housing units that will be constructed on the site after the proposed demolition of Earls Court, as well as concerns over the views of local residents.[13]

Despite the opposition, Boris Johnson approved the redevelopment plans on 3 July 2013.[14]