From Infogalactic: the planetary knowledge core
Jump to: navigation, search
This article is about the stage of the language. For the historical period, see Early Modern Britain.
"Emode" redirects here. For the media company, see Tickle.com.

Prior to and following the accession of James I to the English throne in 1603, the emerging English standard began to influence the spoken and written Middle Scots of Scotland.

Modern readers of English are generally able to understand texts written in the late phase of the Early Modern English period (e.g. the first edition of the King James Bible and the works of William Shakespeare), while texts from the earlier phase (such as Le Morte d'Arthur) may present more difficulties (though the latter is often classified as late Middle English). The Early Modern English of the early 17th century forms the base of the grammatical and orthographical conventions that survive in Modern English.

The change from Middle English to Early Modern English was not just a matter of vocabulary or pronunciation changing; it was the beginning of a new era in the history of English. An era of linguistic change in a language with large variations in dialect was replaced by a new era of a more standardised language with a richer lexicon and an established (and lasting) literature.

The period of the English Civil War and the Interregnum was one of social and political upheaval and instability. The dates for Restoration literature are a matter of convention, and they differ markedly from genre to genre. Thus, the "Restoration" in drama may last until 1700, while in poetry it may last only until 1666, the annus mirabilis; and in prose it might end in 1688, with the increasing tensions over succession and the corresponding rise in journalism and periodicals, or not until 1700, when those periodicals grew more stabilized.

The 17th-century port towns (and their forms of speech) gained influence over the old county towns. England experienced a new period of internal peace and relative stability, encouraging the arts including literature, from around the 1690s onwards. Modern English can be taken to have emerged fully by the beginning of the Georgian era in 1714, although English orthography remained somewhat fluid until the publication of Johnson's A Dictionary of the English Language in 1755. The towering importance of William Shakespeare over the other Elizabethan authors was the result of his reception during the 17th and 18th century, directly contributing to the development of Standard English. As a consequence, Shakespeare's plays are familiar and comprehensible today, 400 years after they were written,[4] but the works of Geoffrey Chaucer and William Langland, written only 200 years earlier, are considerably more difficult for the average reader. 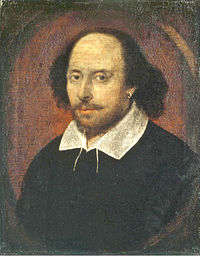 The Early Modern English spelling system was similar to that of Middle English. Certain changes were made, however, sometimes for reasons of etymology (as with the silent ⟨b⟩ that was added to words like debt, doubt and subtle).

Early Modern English orthography had a number of features of spelling that have not been retained:

Much was not standard, however. For example, the word "he" could be spelled "he" or "hee" in the same sentence, as it is found in Shakespeare's plays.

Most consonant sounds of Early Modern English have survived into present-day English; however, there are still a few notable differences in pronunciation:

The following information primarily comes from studies of the Great Vowel Shift;[12][13] see the related chart.

The precise nature of Early Modern English rhotic vowels (also known as r-colored vowels) is somewhat ambiguous, although it is clear that the r sound (the phoneme /r/) was probably always pronounced following vowel sounds (more in the style of today's typical American, Irish or Scottish accent, and less like today's typical English accent). Furthermore, /ɛ/, /ɪ/ and /ʌ/ were not necessarily merged before /r/, as they are in most modern English dialects. The stressed modern phoneme /ɜːr/, when spelled ⟨er⟩, ⟨ear⟩, and ⟨or⟩ (as in clerk, earth, or world), used a vowel sound with an a-like quality, perhaps approximately [ɐɹ] or [äɹ]. 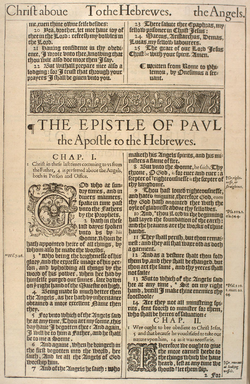 Thou was already falling out of use in the Early Modern English period.[citation needed] It rarely remains in customary use in Modern Standard English: only for certain solemn occasions such as addressing inferiors, while it may remain in regular use in particular, regional English dialects.[citation needed]

The translators of the King James Version of the Holy Bible intentionally preserved, in Early Modern English, archaic pronouns and verb endings that had already begun to fall out of spoken use. This enabled the English translators to convey the distinction between the 1st, 2nd and 3rd person singular and plural verb forms of the original Hebrew and Greek sources.[citation needed]

Like other personal pronouns, thou and ye have different forms dependent on their grammatical case; specifically, the objective form of thou is thee, its possessive forms are thy and thine, and its reflexive or emphatic form is thyself.

During the Early Modern period, English verb inflections became simplified as they evolved towards their modern forms:

The modal auxiliaries cemented their distinctive syntactical characteristics during the Early Modern period. Thus, the use of modals without an infinitive became rare (as in "I must to Coventry"; "I'll none of that"). The use of modals' present participles to indicate aspect (as in "Maeyinge suffer no more the loue & deathe of Aurelio" from 1556), and of their preterite forms to indicate tense (as in "he follow'd Horace so very close, that of necessity he must fall with him") also became uncommon.[22]

Some verbs ceased to function as modals during the Early Modern period. The present form of must, mot, became obsolete. Dare also lost the syntactical characteristics of a modal auxiliary, evolving a new past form (dared) distinct from the modal durst.[23]

The perfect of the verbs had not yet been standardised to use uniformly the auxiliary verb "to have". Some took as their auxiliary verb "to be", as in this example from the King James Bible, "But which of you ... will say unto him ... when he is come from the field, Go and sit down..." [Luke XVII:7]. The rules that determined which verbs took which auxiliaries were similar to those still observed in German and French (see unaccusative verb).

The modern syntax used for the progressive aspect ("I am walking") became dominant by the end of the Early Modern period, but other forms were also common. These included the prefix a- ("I am a-walking") and the infinitive paired with "do" ("I do walk"). Moreover, the to be + -ing verb form could be used to express a passive meaning without any additional markers: "The house is building" could mean "The house is being built."[24]

A number of words which remained in common use in Modern English have undergone semantic narrowing.

Use of the verb "to suffer" in the sense of "to allow" survived into Early Modern English, as in the phrase "suffer the little children" of the King James Bible, but has mostly been lost in Modern English.