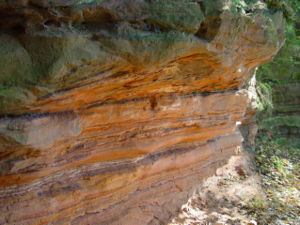 Sandstone from the Early Triassic Epoch

The Early Triassic is the first of three epochs of the Triassic Period of the geologic timescale. It spans the time between 252.17 ± 0.06 Ma and 247.2 Ma (million years ago). Rocks from this epoch are collectively known as the Lower Triassic, which is a unit in chronostratigraphy. The Early Triassic is the oldest epoch of the Mesozoic Era and is divided into the Induan and Olenekian ages.

The Lower Triassic series is coeval with the Scythian stage, which is today not included in the official timescales but can be found in older literature. In Europe, most of the Lower Triassic is composed of Buntsandstein, a lithostratigraphic unit of continental red beds. 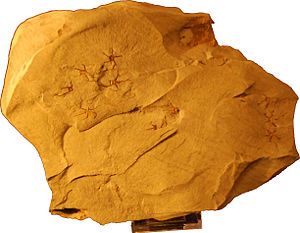 The Permian-Triassic extinction event spawned the Triassic period. The massive extinctions that ended the Permian period and Paleozoic era caused extreme hardships for the surviving species. Many types of corals, brachiopods, molluscs, echinoderms, and other invertebrates had completely disappeared. The most common Early Triassic hard-shelled marine invertebrates were bivalves, gastropods, ammonites, echinoids, and a few articulate brachiopods. The most common land animal was the small herbivorous synapsid Lystrosaurus.

Early Triassic faunas lacked biodiversity and were relatively homogenous throughout the epoch due to the effects of the extinction, ecological recovery on land took 30M years.[1] The climate during the Early Triassic epoch (especially in the interior of the supercontinent Pangaea) was generally arid, rainless and dry and deserts were widespread however the poles possessed a temperate climate. The relatively hot climate of the Early Triassic may have been caused by widespread volcanic eruptions which accelerated the rate of global warming and possibly caused the Permian Triassic extinction event.

Until recently the existence of an extinction event about 3 million years following the end-Permian extinctions was not recognised,[2] possibly because there were few species left to go extinct. However, studies on conodonts have revealed that temperatures rose in the first 3 million years of the Triassic, ultimately reaching sea surface temperatures of 40 °C in the tropics around 249 million years ago.[3] Large and mobile species disappeared from the tropics, and amongst the immobile species such as molluscs only the ones that could cope with the heat survived; half the bivalves disappeared.[4] On land the tropics were practically devoid of life.

Big, active animals only returned to the tropics, and plants recolonised on land when temperatures returned to normal around 247 million years ago.