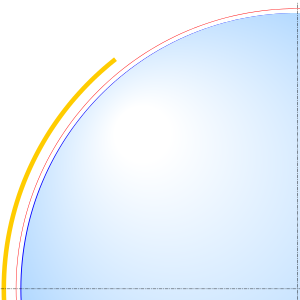 Scale drawing of the oblateness of the 2003 IERS reference ellipsoid. The outer edge of the dark blue line is an ellipse with the same eccentricity as that of the Earth, with north at the top. For comparison, the outer edge of light blue area is a circle of diameter equal to the minor axis. The red line denotes the Karman line and yellow area, the range of the International Space Station.

An Earth ellipsoid is a mathematical figure approximating the shape of the Earth, used as a reference frame for computations in geodesy, astronomy and the geosciences. Various different ellipsoids have been used as approximations.

It is an ellipsoid of revolution, whose short (polar) axis (connecting the two flattest spots called geographical north and south poles) is approximately aligned with the rotation axis of the Earth. The ellipsoid is defined by the equatorial axis a and the polar axis b; their difference is about 21 km or 0.335 percent. Additional parameters are the mass function J2, the correspondent gravity formula, and the rotation period (usually 86164 seconds).

Many methods exist for determination of the axes of an Earth ellipsoid, ranging from meridian arcs up to modern satellite geodesy or the analysis and interconnection of continental geodetic networks. Amongst the different set of data used in national surveys are several of special importance: the Bessel ellipsoid of 1841, the international Hayford ellipsoid of 1924, and (for GPS positioning) the WGS84 ellipsoid.

Historical method of determining the ellipsoid

High precision land surveys can be used to determine the distance between two places at nearly the same longitude by measuring a base line and a chain of triangles. (Suitable stations for the end points are rarely at the same longitude). The distance Δ along the meridian from one end point to a point at the same latitude as the second end point is then calculated by trigonometry. The surface distance Δ is reduced to Δ', the corresponding distance at mean sea level. The intermediate distances to points on the meridian at the same latitudes as other stations of the survey may also be calculated.

The geographic latitudes of both end points, φs (standpoint) and φf (forepoint) and possibly at other points are determined by astrogeodesy, observing the zenith distances of sufficient numbers of stars. If latitudes are measured at end points only, the radius of curvature at the midpoint of the meridian arc can be calculated from R = Δ'/(|φs-φf|). A second meridian arc will allow the derivation of two parameters required to specify a reference ellipsoid. Longer arcs with intermediate latitude determinations can completely determine the ellipsoid. In practice multiple arc measurements are used to determine the ellipsoid parameters by the method of least squares. The parameters determined are usually the semi-major axis,

, and either the semi-minor axis,

, or the inverse flattening

, (where the flattening is

Geodesy no longer uses simple meridian arcs, but complex networks with hundreds of fixed points linked by the methods of satellite geodesy.

The reference ellipsoid models listed below have had utility in geodetic work and many are still in use. The older ellipsoids are named for the individual who derived them and the year of development is given. In 1887 the English surveyor Colonel Alexander Ross Clarke CB FRS RE was awarded the Gold Medal of the Royal Society for his work in determining the figure of the Earth. The international ellipsoid was developed by John Fillmore Hayford in 1910 and adopted by the International Union of Geodesy and Geophysics (IUGG) in 1924, which recommended it for international use.

At the 1967 meeting of the IUGG held in Lucerne, Switzerland, the ellipsoid called GRS-67 (Geodetic Reference System 1967) in the listing was recommended for adoption. The new ellipsoid was not recommended to replace the International Ellipsoid (1924), but was advocated for use where a greater degree of accuracy is required. It became a part of the GRS-67 which was approved and adopted at the 1971 meeting of the IUGG held in Moscow. It is used in Australia for the Australian Geodetic Datum and in South America for the South American Datum 1969.

The GRS-80 (Geodetic Reference System 1980) as approved and adopted by the IUGG at its Canberra, Australia meeting of 1979 is based on the equatorial radius (semi-major axis of Earth ellipsoid)

and angular velocity of rotation

a derived quantity. The minute difference in

seen between GRS-80 and WGS-84 results from an unintentional truncation in the latter's defining constants: while the WGS-84 was designed to adhere closely to the GRS-80, incidentally the WGS-84 derived flattening turned out to be slightly different than the GRS-80 flattening because the normalized second degree zonal harmonic gravitational coefficient, that was derived from the GRS-80 value for J2, was truncated to 8 significant digits in the normalization process.[1]

Note that the same ellipsoid may be known by different names. It is best to mention the defining constants for unambiguous identification.

A data set which describes the global average of the Earth's surface curvature is called the mean Earth Ellipsoid. It refers to a theoretical coherence between the geographic latitude and the meridional curvature of the geoid. The latter is close to the mean sea level, and therefore an ideal Earth ellipsoid has the same volume as the geoid.

While the mean Earth ellipsoid is the ideal basis of global geodesy, for regional networks a so-called reference ellipsoid may be the better choice.[4] When geodetic measurements have to be computed on a mathematical reference surface, this surface should have a similar curvature as the regional geoid. Otherwise the reduction of the measurements would get small distortions.

This is the reason for the "long life" of former reference ellipsoids like the Hayford or the Bessel ellipsoid, despite of the fact that their main axes deviate by several hundred meters from the modern values. Another reason is a juridical one: the coordinates of millions of boundary stones should remain fixed for a long period. If their reference surface would change, the coordinates themselves would also change.

However, for international networks, GPS positioning or astronautics, these regional reasons are less relevant. As the knowledge of Earth's figure is increasingly accurate, the International Geoscientific Union IUGG usually adopts the axes of the Earth ellipsoid to the best available data.