From Infogalactic: the planetary knowledge core
Jump to: navigation, search
This article is about the modern region. For the Anglo-Saxon kingdom, see Kingdom of East Anglia. 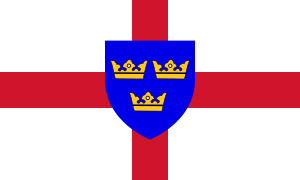 Flag of East Anglia
File:East Anglia UK Locator Map.svg
East Anglia: with the administrative counties of Norfolk and Suffolk (in red) to the north and south respectively and Cambridgeshire (in pink) to the west.

East Anglia is an area in the East of England. The name derives from the Anglo-Saxon kingdom of the East Angles, a tribe that originated in Angeln, northern Germany. Today it is legally defined as a NUTS 2 statistical region, comprising the counties of Norfolk, Suffolk and Cambridgeshire, including the city of Peterborough unitary authority area.[1]

East Anglia initially consisted of Norfolk and Suffolk, but upon the marriage of the East Anglian princess Etheldreda, the Isle of Ely also became part of the kingdom. The Kingdom of the East Angles, formed about the year 520 by the merging of the North and the South Folk (Angles who had settled in the former lands of the Iceni during the previous century), was one of the seven Anglo-Saxon heptarchy kingdoms (as defined in the 12th century writings of Henry of Huntingdon). For a brief period following a victory over the rival kingdom of Northumbria around the year 616, East Anglia was the most powerful of the Anglo-Saxon kingdoms of England, and its King Raedwald was Bretwalda (overlord of the Anglo-Saxons kingdoms). But this did not last: over the next forty years, East Anglia was defeated by the Mercians twice, and it continued to weaken relative to the other kingdoms until in 794, Offa of Mercia had its king Æthelberht killed and took control of the kingdom himself.

The independence of the East Anglians was restored by a successful rebellion against Mercia (825–827), in the course of which two Mercian kings were killed attempting to crush it. On 20 November 869 the Danes killed King Edmund and took the kingdom, which they named East Anglia (see Ivar the Boneless). The Anglo-Saxons retook the area in 920, only to lose it again in 1015–1017, when it was conquered by Canute the Great and given as a fiefdom to Thorkell the Tall, who was made Jarl of East Anglia in 1017.

Large sections of East Anglia consisted of marshland and bogs until the 17th century, despite the construction of early sea barriers by the Roman Empire. During the 17th century the alluvial land was converted into arable land by means of systematic drainage using a collection of drains and river diversions. In the 1630s thousands of Puritan families from East Anglia settled in the American region of New England, taking much East Anglian culture with them.[2] East Anglia, with much of its earnings based on wool and textiles, was a rich area of England until the effects of the Industrial Revolution moved manufacturing to the Midlands and the North.

During the Second World War, the Royal Air Force and the United States Army Air Forces constructed many air bases in East Anglia for the heavy bomber fleets of the Combined Bomber Offensive against Nazi-occupied Europe. On average the RAF bases came once every eight miles. Building them was a massive civil engineering project that inevitably damaged the environment. East Anglia was chosen because it had considerable open space and level terrain and it was relatively close to mainland Europe, thus shortening flights and allowing for greater bomb loads. Remnants of some of these bases are still visible while a few remain in use. One, near Norwich, has become Norwich International Airport.

Pillboxes which were erected in 1940 to help defend the nation against invasion can also be found throughout the region at strategic points.[3]

Parts of this region of England are characterised by the flatness of the land, partly consisting of fenland and reclaimed marshland, though much of Suffolk and Norfolk is gently undulating with glacial moraine ridges providing steeper hills in areas such as North Norfolk. The supposed flatness of the Norfolk landscape is noted in Noël Coward's Private Lives – "Very flat, Norfolk" – and the history of its waterways and drainage forms the backdrop to Graham Swift's novel Waterland. The region also figures in works by L.P. Hartley, Arthur Ransome and Dorothy L. Sayers, among many others.

Major urban areas in the region include the cities of Norwich, Cambridge and Peterborough. Ipswich is an important town in Suffolk. Smaller towns and cities include Bury St Edmunds, Ely, Lowestoft and Great Yarmouth. Much of the area is still rural in nature with villages surrounded by agricultural land and agriculture has always been important in this fertile region. The landscape of Cambridgeshire and Norfolk has been heavily influenced by Dutch technology, from the use of red clay roof tiles to the draining of The Fens.

The region has a wide range of small-scale holiday resorts ranging from the traditional coastal towns of Felixstowe and Lowestoft in Suffolk and Great Yarmouth in Norfolk to small fishing villages like Aldeburgh and Southwold in Suffolk. Other tourist attractions include historic towns like Bury St. Edmunds, Cambridge and Ely as well as areas such as Constable Country, the Broads and the North Norfolk coast.

Major rivers include Suffolk's Stour, running through country beloved of the painter John Constable, and the Nene. The River Cam is a tributary of the Great Ouse and gives its name to Cambridge whilst Norwich sits on the River Yare and River Wensum. The River Orwell flows through Ipswich and has its mouth, with the River Stour at Felixstowe. The Norfolk and Suffolk Broads form a network of waterways between Norwich and the coast and are popular for recreational boating.

Although water plays a significant role in the fenland and broadland landscapes, the area is among the driest in the United Kingdom. During the summer months, tinder-dry conditions are frequently experienced, occasionally resulting in field and heath fires.

Two of the counties of East Anglia, Norfolk and Suffolk, have no motorway links at all, with only small sections of the M11 and A1(M) running through Cambridgeshire. Main A roads such as the A12 and A47 link the region to the rest of the UK, with the A14 linking the Midlands to the Port of Felixstowe. This is the busiest container port in the UK, dealing with over 40% of container traffic and a major gateway port into the country.

Rail links in the region include the Great Eastern Main Line from Norwich to London Liverpool Street and the West Anglia Main Line connecting Cambridge to London. Sections of the East Coast Main Line run through the region with Peterborough an important interchange on this line. The region is linked to the Midlands and north-west England by rail and has a number of local rail services such as the Bittern Line from Norwich to Sheringham.

The region is ideal for cycling and National Cycle Route 1 passes through it. Cambridge has the largest proportion of its residents in the UK cycling to work with 25% commuting by bicycle.[5] The city also has the longest stretch of guided busway in the world, the 13.3 miles (21.4 km) Cambridgeshire guided busway which opened in 2011.[6] The only major commercial airport in the region is Norwich International Airport, although London Stansted Airport, the third busiest passenger airport in the UK, lies just south of Cambridge in north-west Essex.

The University of Cambridge, established at the start of the 13th century and situated in the town of the same name, is East Anglia's best-known institution of higher learning, and is among the oldest and most famous universities in the world. Other institutions include the University of East Anglia (in Norwich), Norwich University of the Arts, Anglia Ruskin University (with campuses in Cambridge and Chelmsford), University Campus Suffolk (based in Ipswich) and University Centre Peterborough.

Great Yarmouth and Lowestoft Enterprise Zone, an enterprise zone initiated by New Anglia Local Enterprise Partnership,[7] was announced in 2011 and launched in April 2012.[8] It includes six sites with a total area of 121 hectares (300 acres), which have attracted a number of energy-related businesses.[7] The sites are Beacon Park and South Denes in Great Yarmouth, Mobbs Way, Riverside Road and South Lowestoft Industrial Estate in Lowestoft and Ellough Business Park in Ellough near Beccles.[8]

There is also an enterprise zone in Cambridgeshire, Alconbury Enterprise Campus in Huntingdon.[9] 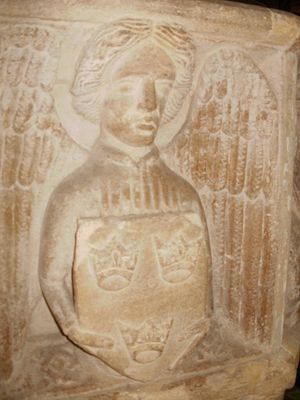 The East Anglian flag as it is known today was invented by George Henry Langham and adopted by the London Society of East Anglians. One does not need permission to fly the flag of East Anglia as it is an officially recognised historic flag. It draws upon the coat of arms of the Wuffingas dynasty: Three Crowns in a blue shield, the colour of the Swedish flag, superimposed on a St. George's cross. The device refers to an old legend of the three crowns of East Anglia, and the blue colour represents the Anglo-Scandinavian heritage of much of East Anglia.[citation needed]

The three crowns of East Anglia appear, carved in stone, on the baptismal font (c.1400) in the parish church of Saxmundham, in Suffolk.[10]

The crowns also appear in the arms of the borough of Bury St. Edmunds and the University of East Anglia.