More than 1.5 billion people, about 38% of the population of Asia and 22% or over one fifth of all the people in the world, live in East Asia. Although the coastal and rivery areas of the region form one of the world's most populated places, the population in Mongolia and Western China, both landlocked areas, is very sparsely distributed, with Mongolia having the lowest population density of a sovereign state. The overall population density of the region is 133 inhabitants per square kilometre (340/sq mi), about three times the world average of 45/km2 (120/sq mi).

Historically, societies in East Asia have been part of the Chinese cultural sphere, and East Asian vocabulary and scripts are often derived from Classical Chinese and Chinese script. Major religions include Buddhism (mostly Mahayana), Confucianism or Neo-Confucianism, Taoism, Chinese folk religion, Islam in China and Taiwan, Shinto in Japan, Shamanism in Korea, Mongolia and other indigenous populations of northern East Asia,[3][4] and recently Christianity in South Korea.[5] The Chinese Calendar is the root from which many other East Asian calendars are derived.

Chinese Dynasties dominated the region in matters of culture, trade, and exploration as well as militarily for a very long time. There are records of tributes sent overseas from the early kingdoms of Korea and Japan. There were also considerable levels of cultural and religious exchange between the Chinese and other regional Dynasties and Kingdoms.

As connections began to strengthen with the Western world, China's power began to diminish. Around the same time, Japan solidified itself as a nation state. Throughout WWII, Korea, Republic of China, northeastern and eastern part of China, and Vietnam all fell under Japanese control. Following Japan's defeat in the war, the Korean peninsula became independent, while Taiwan returned to be part of the Republic of China after the Chinese Civil War. 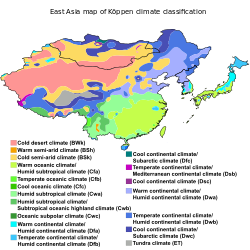 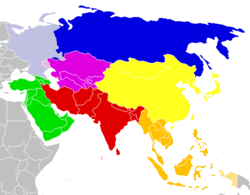 UNSD geoscheme for Asia based on statistic convenience rather than implying any assumption regarding political or other affiliation of countries or territories:[6]
North Asia
Central Asia
Western Asia
South Asia
East Asia
Southeast Asia

The UNSD definition of East Asia is based on statistical convenience,[6] but also other common definitions of East Asia contain the entirety of China (including Hong Kong and Macau), Republic of China, Mongolia, Japan, North Korea and South Korea.[note 3][1][7]

There are mixed debates around the world whether these countries or regions should be considered in East Asia or not.

In business and economics, "East Asia" has sometimes been used to refer to a wide geographical area covering ten Southeast Asian countries in ASEAN, People's Republic of China, Republic of China (Taiwan), Japan and South Korea.[note 3] However, in this context, the term "Far East" is often more appropriate which covers ASEAN countries and the countries in East Asia. However, being a Eurocentric term, Far East describes the region's geographical position in relation to Europe rather than its location within Asia. Alternatively, the term "Asia Pacific Region" is often used in describing East Asia, Southeast Asia as well as Oceania.

Observers preferring a broader definition of "East Asia" often use the term Northeast Asia to refer to the greater China area, Taiwan, the Korean Peninsula, and Japan, with Southeast Asia covering the ten ASEAN countries. This usage, which is seen in economic and diplomatic discussions, is at odds with the historical meanings of both "East Asia" and "Northeast Asia".[11][12][13] The Council on Foreign Relations defines Northeast Asia as Japan and Korea.[14]

The economy of East Asia is one of the most successful regional economies of the world, being home to some of the world's largest and most prosperous economies. Major positive factors have ranged from the higher IQ of East Asians as compared to other races, favourable political-legal environments for industry and commerce, through abundant natural resources of various kinds, to plentiful supplies of relatively low-cost, skilled and adaptable labour.[citation needed]

In modern societies, a high level of structural differentiation, functional specialisation, and autonomy of the economic system from government is a major contributor to industrial-commercial growth and prosperity. Currently in East Asia, trading systems are relatively open; and zero or low duties on imports of consumer and capital goods etc. have considerably helped stimulate cost-efficiency and change. Free and flexible labour and other markets are other important factors making for high levels of business-economic performance. East Asian populations have demonstrated highly positive work ethics. There are relatively large and fast-growing markets for consumer goods and services of all kinds.[citation needed]

Main article: Cities of East Asia
Pass of the ISS over Mongolia, looking out west towards the Pacific Ocean, China, and Japan. As the video progresses, you can see major cities along the coast and the Japanese islands on the Philippine Sea. The island of Guam can be seen further down the pass into the Philippine Sea, and the pass ends just to the east of New Zealand. A lightning storm can be seen as light pulses near the end of the video.