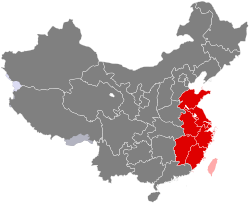 Although an intangible and loosely defined concept, for administrative and governmental purposes the region is defined by the Chinese Central Government to include the provinces of (in alphabetical order) Anhui, Fujian, Jiangsu, Jiangxi, Shandong, and Zhejiang, as well as the municipality of Shanghai. Since the Chinese government claims Taiwan and the few outlying islands of Fujian governed by the Republic of China (Taiwanese government) as its territory, the claimed "Taiwan Province, People's Republic of China" is also classified in this region.