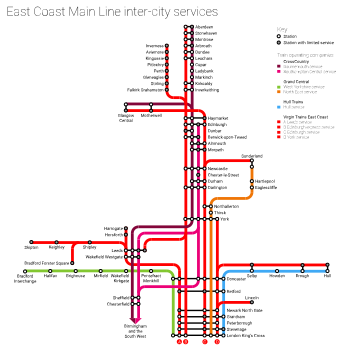 The East Coast Main Line (ECML) is a 393-mile long (632 km)[2] railway[1] link between London and Edinburgh via Peterborough, Doncaster, Wakefield, Leeds, York, Darlington and Newcastle, electrified along the whole route. Services north of Edinburgh to Aberdeen and Inverness use diesel trains. The main franchise on the line is operated by Virgin Trains East Coast.

The route forms a key artery on the eastern side of Great Britain and is broadly paralleled by the A1 trunk road. It links London, the South East and East Anglia, with Yorkshire, the North East Regions and Scotland. It also carries key commuter flows for the north side of London. It is important to the economic health of several areas of England and Scotland. It also handles cross-country, commuter and local passenger services, and carries heavy tonnages of freight traffic. 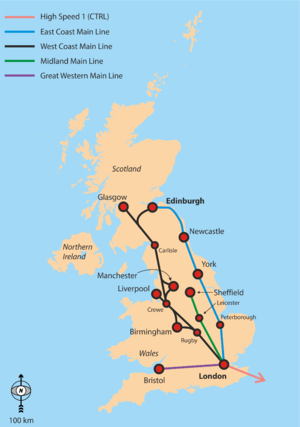 The core part of the route is the main line between King's Cross and Edinburgh, with the Hertford Loop used for local and freight services and the Northern City Line only used on weekdays for inner suburban services.[3]

The line was built by three railway companies, each serving their own area, but with the intention of linking up to form the through route that became the East Coast Main Line. From north to south they were

When first completed, the GNR made an end-on connection at Askern, famously described by the GNR's chairman as, "a ploughed field four miles north of Doncaster",[4] with the Lancashire and Yorkshire Railway, a short section of which was used to reach the NER at Knottingley. In 1871, the route was shortened - NER opened a direct line which ran from an end-on junction with the GNR, at Shaftholme, just south of Askern to Selby and then (once over Selby bridge on the Leeds- Hull Line) direct to York[4]

Realising that through journeys were an important part of their business, the companies established special rolling stock in 1860 on a collaborative basis; it was called the "East Coast Joint Stock".

In 1923 the three companies were grouped into the London and North Eastern Railway (LNER). This later became part of British Railways in 1948.

Numerous alterations to short sections of the original route have taken place, the most notable being the opening of the King Edward VII Bridge in Newcastle upon Tyne in 1906 and the Selby Diversion, built to bypass anticipated mining subsidence from the Selby coalfield and a bottleneck at Selby station. The Selby Diversion was opened in 1983 and diverged from the original ECML at Temple Hirst Junction, north of Doncaster, and joined the Leeds to York Line at Colton Junction south west of York. 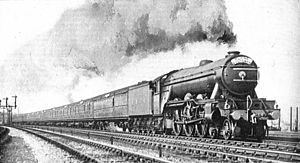 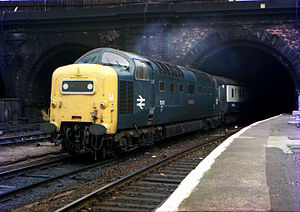 The ECML has been the backdrop for a number of famous rail journeys and locomotives. The line was worked for many years by Pacific locomotives designed by Gresley, including the famous steam locomotives "Flying Scotsman" and "Mallard". Mallard achieved a world record speed for a steam locomotive, at 126 miles per hour (203 km/h) and this record was never beaten. It made the run on the Grantham-to-Peterborough section, on the descent of Stoke Bank.

Steam locomotives were replaced by Diesel electrics in the early 1960s, when the purpose-built Deltic locomotive was developed by English Electric. The prototype was successful and a fleet of 22 locomotives was built, to handle all the important express traffic. The Class 55s were powered by two engines originally developed for fast torpedo boats, and the configuration of the engines led to the Deltic name. Their characteristic throaty exhaust roar and chubby body outline made them unmistakable. The Class 55 was for a time the most powerful diesel locomotive in service in Britain, at 3,300 hp (2,500 kW).

Just after the Deltics were introduced, the first sections of the East Coast Main Line were upgraded to allow 100 miles per hour (160 km/h) running. The first length to be cleared for the new higher speed was a 17 miles (27 km) stretch between Peterborough and Grantham on 15 June 1965, the second was 12 miles (19 km) between Grantham and Newark.[5]

As the demand for higher speed intensified, the Deltics were superseded by the High Speed Train (HST), introduced between 1976 and 1981, and still in service in 2015 (re-engined, with the original Paxman Valenta power units replaced by MTU engines).

A prototype of the HST, the Class 41 achieved 143 mph (230 km/h) on the line in 1973.[6][7] Current UK legislation requires in-cab signalling for speeds of over 125 mph which is the primary reason preventing the InterCity 225 train-sets from operating at their design speed of 140 mph (225 km/h) in normal service.

A secondary factor was that the signalling technology of the time was insufficient to allow detection of two broken rails on the line on which the train was operating.[8]

Before the present in-cab regulations came in, British Rail experimented with 140 mph running by introducing a fifth, flashing green signalling aspect on the Down Fast line (signals P487 to P615) and Up Fast line (signals P610 to P494) between New England North and Stoke Tunnel. The fifth aspect is still shown in normal service and appears when the next signal is showing a green (or another flashing green) aspect and the signal section is clear, which ensures that there is sufficient braking distance to bring a train to a stand from 140 mph.[6] Locomotives have operated on the ECML at speeds of up to 161.7 mph (260.2 km/h) in test runs. The capability to run special test trains in excess of 125 mph is listed as being maintained in the LNE Sectional Appendix[9]

The ECML was electrified using 25 kV AC overhead lines in two phases between 1976 and 1991: The first phase between London (Kings Cross) and Hitchin was carried out between 1976 and 1978 as part of the Great Northern Suburban Electrification Project using Mk.3A equipment. This included the Hertford Loop Line.[10] The second phase began in 1984, when authority was given to electrify to Edinburgh and Leeds using Mk.3B equipment. Construction began in 1985, and the section between Hitchin and Peterborough was completed in 1987, Doncaster and York were reached in 1989. By 1990 electrification had reached Newcastle, and in 1991 Edinburgh. At the peak of the electrification project during the late 1980s, it was claimed to be the "longest construction site in the world" at over 250 miles (400 km). The current InterCity 225 rolling stock was introduced in 1990 to work the electrified line.[11]

The line is mainly four tracks from London to Stoke Tunnel, south of Grantham. However, there are two major twin-track sections: the first of these is near Welwyn North Station as it crosses the Digswell Viaduct and passes through two tunnels; the second is a section around 'Stilton Fen', between Fletton Junction near Peterborough, and southwards towards Holme Junction; furthermore, the section between Holme Junction south to Huntingdon is mostly triple track. North of Grantham the route is twin track except for four-track sections at Retford around Doncaster, between Colton Junction (which is south of York), Thirsk and Northallerton, and another at Newcastle.[12]

The main route is electrified along the full route and only the line between Leeds and York (Neville Hill Depot to Colton Junction) is non-electrified.[12] This diversionary route will be electrified as part of the transpennine electrification scheme, to be completed by December 2018.

With most of the line rated for 125 mph (200 km/h) operation, the ECML was the fastest main line in the UK until the opening of High Speed 1. These relatively high speeds are possible because much of the ECML travels on fairly straight track on the flatter, eastern regions of England, through Lincolnshire and Cambridgeshire, though there are significant speed restrictions (due to curvature) particularly north of Darlington and between Doncaster and Leeds. By contrast, the West Coast Main Line has to traverse the Trent Valley and the mountains of Cumbria, leading to many more curves and a lower general speed limit of 110 mph (180 km/h). Speeds on the WCML have been increased in recent years with the introduction of tilting Pendolino trains and now match the 125 mph speeds available on the ECML.

Most express passenger services use the InterCity 225 rolling stock.

Some diesels still operate on line, including: 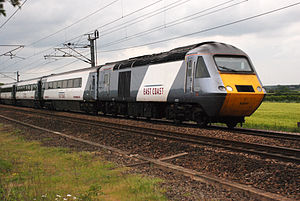 A train operated by the former main provider of services on the line, East Coast.

Eurostar previously held the rights to run five trains a day on the line for services from continental Europe to cities north of London, as part of the Regional Eurostar plan, although such services have never been run.[13]

The ECML is one of the busiest lines on the British rail network and there is currently insufficient capacity on parts of the line to satisfy all the requirements of both passenger and freight operators.[14]

There are bottlenecks at the following locations:

Railway operations are vulnerable during high winds and there have been several de-wirements over the years due to the unusually wide spacing (up to 75m) between the supporting masts of the overhead lines. The other cost-reduction measure was the use of headspan catenary support systems over the quadruple track sections - as employed in the Weaver Junction to Glasgow Electrification on the WCML during the 1970s. Headspans do not have mechanically independent registration (MIR) of each electrified road and thus are more complex to setup, compared to TTC and portal style support structures[clarification needed], during installation. In the event of a de-wirement of a given road, headspans result in the need to correctly setup the OLE of adjacent roads before the line can reopen to electric traction. This was a result of extreme pressure from the Department for Transport to reduce avoidable costs when the line was originally electrified between 1985 and 1990.[21]

Over the years successive infrastructure managers have developed schemes for route improvements.[12] The most recent of which is the £240 million "ECML Connectivity Fund" included in the 2012 HLOS[31] with the objective of increasing capacity and reducing journey times. Current plans include the following:

The ECML has been witness to a number of incidents resulting in death and serious injury: 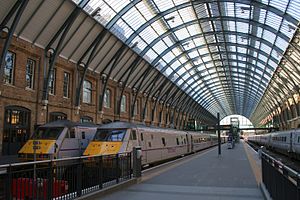 The cuttings and tunnel entrances just north of King's Cross make a memorable smoky appearance in the 1955 Ealing comedy film The Ladykillers. Also during the 1950s, the line featured in the 1954 documentary short Elizabethan Express. Later, the 1971 British gangster film Get Carter features a journey from London Kings Cross to Newcastle in the opening credits. The motoring show Top Gear featured a race including LNER A1 60163 Tornado running up this line from London to Edinburgh.

The route has been featured in several train simulator games. Trainz Simulator 2010 features the route between London and York, Trainz Simulator 12 extends the route to Newcastle, and Trainz: A New Era brings it all the way to Edinburgh, allowing the entire 393-mile route to be driven. All three routes take place during the 1970s, around the time the InterCity 125 was introduced. This is reinforced by instructions in the "HST Southbound Express" session not to move until the guard has locked the doors, since the trains did not have pneumatic locks initially; doing so will lead to an automatic failure. Other rolling stock includes Class 37s, Class 47s, and Class 105s, plus Mark 2 coaches. TS12's version added Class 55 Deltics and Class 313s, as well as additional pre-made, pre-scripted sessions.

King's Cross is also known as the starting point of the Hogwarts Express from the books and films in the Harry Potter series. Within the station concourse there is a tourist attraction of the Platform 9¾ sign and a luggage trolley partially embedded in the station wall with an owl cage and suitcases on it.