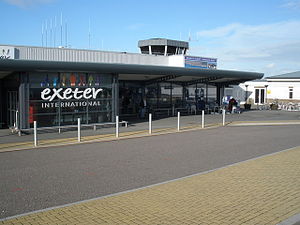 East Devon is a local government district in Devon, England. Its council is based in Sidmouth, and the largest town is Exmouth.

The district was formed on 1 April 1974 by the merger of the borough of Honiton with the urban districts of Budleigh Salterton, Exmouth, Ottery St. Mary, Seaton, Sidmouth along with Axminster Rural District, Honiton Rural District and part of St. Thomas Rural District.

East Devon is covered by two Parliamentary constituencies, East Devon and Tiverton and Honiton. Both were retained in the 2010 general election by the Conservative Party.

In the 2001 census it was found that a third of East Devon's population were over 60. The average for England was 24%. East Devon also had a higher number of people living in 'Medical and Care Establishments' at 1.6% compared to the England average of 0.9%.

A large amount of East Devon is made up of two Areas of Outstanding Natural Beauty (AONB), East Devon AONB and the Blackdown Hills. AONBs have the same level of protection as National parks of England and Wales which restricts new developments, which protects the natural beauty of this district.

The entire East Devon coastline from Exmouth to the border with Dorset is part of the designated World Heritage Site called the Jurassic Coast; the designated area itself continues up to Old Harry Rocks near Swanage.

Exeter International Airport is located in East Devon. A small stretch of the M5 passes through the district.

The head office of Flybe is in the Jack Walker House on the grounds of Exeter Airport.[1]