The East London Mosque, situated in the London Borough of Tower Hamlets between Whitechapel and Aldgate, serves Great Britain's largest Muslim community.[2] Combined with the adjoining London Muslim Centre and Maryam Centre, it is one of the largest mosques in Europe, accommodating more than 7,000 worshippers for congregational prayers.[3] In 1986, the mosque was one of the first in the United Kingdom to be allowed to use loudspeakers to broadcast the adhan.[4]

Construction of the three-storey East London Mosque began in 1982 on land left empty after bombing during World War II, and was completed in 1985. The architect was John Gill Associates.[5] The exterior is a distinctive brick pattern in two colours, with the front facing Whitechapel Road and the rear on Fieldgate Street. The mosque is capped with a golden dome of about 8.5m diameter. The minaret rises to about 28.5m above ground level, and the main entrance is finished with two smaller copies of the minaret. The mosque has two large halls, a gallery, classrooms, offices and a retail unit. 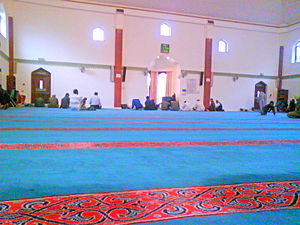 Construction for phase 1 of the mosque's expansion, called the London Muslim Centre, began in 2002 and was completed in 2004. Adjoining and connected to the mosque, it is a six-storey building with a prominent entrance featuring a sweeping mosaic pattern. The centre has two multipurpose halls, a seminar suite, a nursery, classrooms, a fitness centre, a small Islamic library, a radio station, retail units and offices. It was designed by Markland Klaschka Limited.[6]

In 2009 phase 2 commenced,[7] a nine-storey addition on the Fieldgate Street side to be known as the Maryam Centre, on a site originally used by the mosque's funeral services,[8] designed by the same architect.[9] The Maryam Centre opened to the public on 4 July 2013, adding a new main prayer hall, improved funeral services, a visitor centre, and over five floors of facilities for women including prayer spaces, education facilities, a fitness centre, and support services. 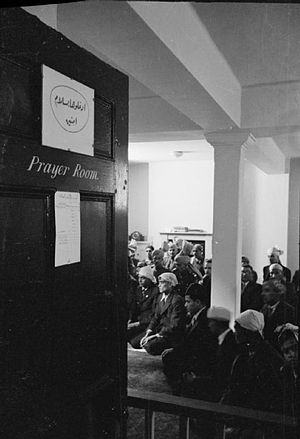 At the beginning of the 20th century, London was the capital of the extensive British Empire, which contained tens of millions of Muslims, but had no mosque for Muslim residents or visitors. On 9 November 1910, at a meeting of Muslims and non-Muslims at the Ritz Hotel, the London Mosque Fund was established with the aims of organising weekly Friday prayers and providing a permanent place of worship for Muslims in London.[10]

People associated with the London Mosque Fund over the years include:[11]

From 1910 to 1940 various rooms had been hired for Jumu'ah prayers on Fridays. Finally, in 1940, three houses were purchased at 446–448 Commercial Road in the east end of London as a permanent place of prayer. On 2 August 1941 the combined houses were inaugurated as the 'East London Mosque and Islamic Culture Centre' at a ceremony attended by the Egyptian Ambassador, Colonel Sir Gordon Neal (representing the Secretary of State for India). The first prayer was led by the Ambassador for Saudi Arabia, Shaikh Hafiz Wahba.[12] From the late 1950s the local Muslim population began to increase due to further immigration from the Indian subcontinent, particularly from Sylhet in East Pakistan which became Bangladesh in 1971. The migrants settled in areas already established by Sylheti expatriate community working in the local docks and Jewish tailoring shops brought over in the days of British India.[14] During the 1970s, this immigration increased significantly.[citation needed] 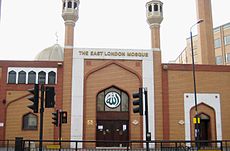 In 1975 the local authority bought the properties in Commercial Road under a compulsory purchase order, in return providing a site with temporary buildings on Whitechapel Road next to the Fieldgate Street Great Synagogue. The local community set about raising funds to erect a purpose-built mosque on the site. King Fahd of Saudi Arabia donated £1.1 million of the £2 million fund,[4] and the governments of Kuwait and Britain also donated to the fund.[15] Seven years later, the building of the new mosque commenced, with foundations laid in 1982 and construction completed in 1985.

It was one of the first mosques in the United Kingdom to broadcast the adhan (call to prayer) from the minaret using loudspeakers.[4] Some local non-Muslim residents protested it as noise pollution, leading to coverage by the Daily Mail, Daily Star; in response, local Church of England clerics gave their support for the adhan in a letter to the East London Advertiser.[4] It had a capacity of 2,000, with prayer areas for men and women, and classroom space for supplementary education. However, by the 1990s the capacity was already insufficient for the growing congregation and for the range of projects based there. The land next to the mosque had been left vacant after bomb damage during World War II, and was used as a car park. The mosque launched a campaign to buy the land, and the purchase was completed in 1999.[16] 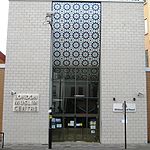 In 2001 Prince Charles launched the project to build the London Muslim Centre (LMC).[17] Construction began in 2002, and the new centre opened on 11 June 2004, with over 15,000 people attending the opening prayers.[18][19] The prayer capacity of the mosque and centre rose to about 5,000, with a greatly increased range of services. The building cost £10.4 million, funding was provided by the London Development Agency,[20] European Development Fund, London Borough of Tower Hamlets and Sure Start. Around £4 million was donated from members of the public.[19][21] 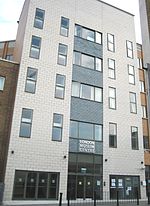 On the opening day Sheikh Abdur Rahman Al-Sudais, Imam of the Kaaba in Makkah, led the Friday prayer. Amongst the guests were Racial Equality Minister Fiona Mactaggart, the chair of the Equality and Human Rights Commission Trevor Phillips and senior officials from the Muslim Council of Britain. Prince Charles, who was in Washington for the funeral of former US president Ronald Reagan, sent a video message of support.[21]

In November 2004 Prince Charles returned to see the centre.[23] The following month Elizabeth II featured excerpts of his visit in her Christmas message.[24][25]

Following the 7 July 2005 London bombings, on the 22nd of July, the mosque was evacuated due to a bomb hoax. The hoax was blamed on extremist Muslims after it condemned the 7/7 bombings and opposed extremist teaching.[26]

In July 2008 the Lord Chief Justice, Lord Phillips, delivered a speech on "Equality Before The Law" at an event highlighting the pro bono legal service at the LMC.[27]

In December 2008 the East London Mosque planned to allow Noor Pro Media to hold a conference on 1 January 2009 which would include a videotaped lecture by Anwar al-Awlaki. Former Shadow Home Secretary Dominic Grieve expressed concern over al-Awlaki's involvement. A spokesman for the mosque said that "Mr Awlaki has not been proven guilty in a court of law. Everyone is entitled to their point of view", and that "We didn't organise this event, they are just using our facilities."[30][31]

4 Mar 2010: hosted 'The BIG Read' organised with IF Charity, Islamic Forum Europe, Muslim Aid, and Tower Hamlets Council, and broke the world record for 'Most children reading with an adult', with 3,234 children listened to readings from Roald Dahl's Charlie and the Chocolate Factory.[32][33]

25 Aug 2010: subject of a BBC documentary, Middle EastEnders, that "chronicles the setbacks and triumphs of an institution which has shaped the identity of a corner of London", timed to anticipate the centenary of the mosque.[35]

4 Sep 2010: the mosque raised over £1.1 million in one night in Ramadan on Channel S,[36] breaking the record for ethnic television for the third year in a row, in an appeal for the building of their Phase 2 expansion.[37]

3 Sep 2011: the English Defence League (EDL) wanted to march past the mosque, but after widespread opposition[39] were prevented by a ban imposed by Home Secretary Theresa May. The EDL instead held a static demonstration in Aldgate, and were stopped by police from entering Tower Hamlets, whilst a larger 'United East End' counter-demonstration was held by an alliance of groups and organisations.[40]

20 Jan 2012: the President of the International Court of Justice, Hisashi Owada, delivered the keynote speech at Evolving World at the London Muslim Centre.[41]

28 Oct 2013: the President of Bosnia and Herzegovina, Bakir Izetbegović visited the Mosque and Centre for an evening dinner reception. He delivered a key note speech to guests and dignitaries in attendance.[43]

30 Sep 2015: subject of BBC documentary Welcome to the Mosque by filmmaker Robb Leech.[46] 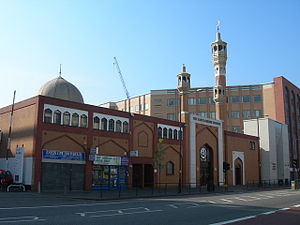 The East London Mosque Trust is a registered charity[47] (previously registered as The London Mosque Fund)[48] and a private company (limited by guarantee, no share capital).[49] The mosque is managed by trustees who are elected biennially by its members at the Annual General Meeting.[50] The Khatib and primary Imam of the mosque is Abdul Qayum, the Chairman is Muhammad Habibur Rahman, the former chairman is Muhammad Abdul Bari and the Executive Director is Dilowar Hussain Khan.[1]

The mosque is a member of the Tower Hamlets Inter Faith Forum,[51] a founding member of The East London Communities Organisation (TELCO),[52] and an affiliate of the Muslim Council of Britain.[53] The Islamic Forum of Europe (IFE) and the mosque are very closely intertwined,[54] the organisation was created in 1989 by Muslims involved in the running of the East London Mosque.[55] Some of the mosque's practices reflect the Hanafi school of law.[56] Gay rights campaigners accused the mosque of having "hosted numerous hate preachers who have promoted the most vicious homophobia imaginable over the years",[57] although the mosque had earlier condemned homophobia,[58] and went on to "ban homophobes".[59] Oxfam cancelled an event at the mosque after learning one of its headline speakers' comments on homosexuality.[60][61]

Prominent imams and Muslim scholars who have visited the mosque: Abdul Rahman Al-Sudais[62] and Saud Al-Shuraim (imams of Masjid al-Haram), Salah Al Budair (imam of Al-Masjid al-Nabawi and a judge of the High Court of Madin), Adel Salem Al Kalbani (former Imam of Masjid al-Haram), Mustafa Cerić (Grand Mufti of Bosnia) and Delwar Hossain Sayeedi (former MP of Bangladesh and one of the leaders of the Jamaat-e-Islami).[63] 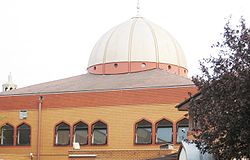 Dome of the mosque viewed from the rear 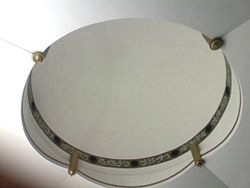 The interior of the dome in the mosque

The mosque has a stated mission to:

The Friday sermon is delivered in Arabic, Bengali and English.

The mosque previously ran Muslim Community Radio (MCR), in partnership with the Islamic Forum of Europe, which started to broadcast in 1998 through an RSL, then through Spectrum. In the month of Ramadan from 2001 to 2013 MCR broadcast 24 hours a day across parts of east London. In 2005 it moved into a new studio in the London Muslim Centre. It was run by volunteers, and provided programmes in English, Bengali and Arabic.[70]