East London Tech City (also known as Tech City and Silicon Roundabout) is a technology cluster located in Central and East London.[1][2][3] It broadly occupies the part of London's East End between Old Street (the boundary of Central and East London) and the Queen Elizabeth Olympic Park in Stratford,[1] with its locus in the Shoreditch area. It is the third-largest technology startup cluster in the world after San Francisco and New York City.[4]

The cluster of web businesses initially developed without any government backing in and around the Old Street Roundabout (on the boundary of Central and East London). This had been a relatively run down area, north of the City of London, and has historically had much lower rents. Companies were encouraged into the area by the low rents after the 2008-2009 recession. There had been many architectural firms in the area that closed around 2009, further suppressing rents. Ironically the area around Old Street was not served back in 2008-2009 by fibre optic cable, but only a few hundred metres away, where rents were much higher in the City of London, an extensive fibre optic cable infrastructure was already in place.

Later, as the cluster developed, there was more support and encouragment by both local and national government, with the goal of creating a cluster comparable to Silicon Valley in the United States.[1][5] Cisco, Facebook, Google, Intel and McKinsey & Company are among the companies that have invested in the area.[6] City University London, London Metropolitan University, Imperial College London, Loughborough University and Queen Mary University of London are academic partners in projects based in the cluster.[7][8] 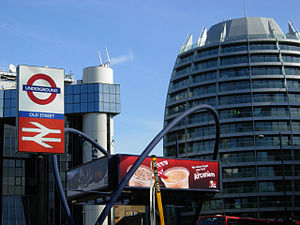 Plans to help accelerate the growth of the cluster were announced by Prime Minister David Cameron in a speech given in east London on 4 November 2010.[6] A year later, Cameron announced that he was appointing entrepreneur Eric van der Kleij to lead the initiative.[9] In 2010 there were 85 startup companies in the area.[10] By 2011, approximately 200 firms were occupying the area, signifying a rapid increase in interest.[11] Wired magazine updated this figure in 2012 and suggested some 5,000 tech companies were located in the wider area centred on the Old Street roundabout.[12] Wired maintains a topic on the area.[13]

On 28 September 2011 it was announced that Google had acquired a seven-storey building near Old Street roundabout. Google said that the building, in Bonhill Street, would host "a range of activities, such as speaker series, hackathons, training workshops and product demonstrations" in addition to providing workspace for new companies.[14] The building, known as Campus London, opened in March 2012.

In 2013 the Nominet Trust selected "5 startups making positive social change" which are based in the cluster: Streetbank, Give What You’re Good At, Videre Est Credere, Buddy App and PaveGen.[15]

A report by EY published in 2016 highlighted the importance of London to the UK's FinTech industry in terms of availability of expertise and demand for services.[16]

Investment in London's technology sector was $2.28 billion in 2015, 69 per cent higher than the $1.3 billion raised in 2014. Since 2010, London-based technology companies have collectively raised $5.2 billion of venture capital funding.[17]

Notable technology companies active in the cluster include:

Educational institutions active in the cluster include:

Financial and professional services providers active in the cluster include:

A number of not-for-profit organisations have created a sense of community in the area including Independent Shoreditch,[25] a business alliance, and Digital Shoreditch, which organises monthly meet-ups plus an annual festival of the same name.

Public sector organisations active in the cluster include:

The rapid growth of the cluster has met with some criticism. Think tank 'Centre for London' said the development had little focus and could be counter-productive. The think tank also raised concerns over a skills shortage, connectivity, lack of mentoring and rising costs.[28] Tech City has been called a "marketing gimmick" on the wrong side of London (away from Heathrow Airport) which is still over 30% more expensive than any city outside London.[29] James Dyson criticised the government for spending money on the scheme to attract international companies who drive up rents instead of helping start-up and hardware companies who he argues have greater potential than software and internet companies.[30]

Tech City (at its locus) is well served by a number of London Buses as well as London Underground, Northern line (Bank branch) and National Rail, Thameslink services at Old Street and London Overground, East London line services at Shoreditch High Street. With the increase in passenger numbers using the station, in 2014 Transport for London announced that it was to offer pop-up retail space at Old Street station as part of a drive to increase its revenue.[31]