East Side is one of the 77 official community areas of Chicago, Illinois. It is located on the far south side of the city, between the Calumet River and the Illinois-Indiana state line, approximately 13 miles (21 km) south of Downtown Chicago. The neighborhood has its own park on Lake Michigan, Calumet Park, and its own forest preserve, Eggers Grove Forest Preserve, which neighborhood residents usually call Eggers Woods. It is served by U.S. Highway 12, U.S. Highway 20, and U.S. Highway 41, which are multiplexed in this neighborhood.

The East Side, until recently, was socially and economically dominated by the Calumet River and the jobs it supported. The community got its name from the river because it was located on its east bank. The river formed the once-thriving industrial Port of Chicago. A cluster of riverside docks and slips allowed materials of all sorts to be loaded and unloaded onto adjacent railroad lines, and the river itself was lined with steel mills. Republic Steel began operations here in 1901. The Republic mill was the site of frequent union unrest, culminating in the Memorial Day Massacre of 1937 and the successful drive by the United Steelworkers to organize the Chicago mills. 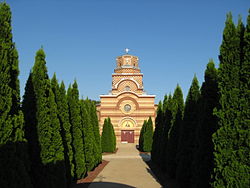 St. Simeon Mirotočivi, a Serbian Orthodox church located on the East Side.

Many of the neighborhood's residents during this period were families of Slovenia, Croatian and Serbian heritage, who had emigrated from Europe to work in the steel mills and take related jobs. Especially after unionization, the neighborhood became a stronghold of the Chicago Democratic Party machine of Mayor Richard J. Daley. The neighborhood's longtime alderman, Edward Vrdolyak, became a noted Chicago "power broker" after the senior Daley's death. Today, the area is largely Hispanic.

In the 1950s, the East Side was divided in two by the Chicago Skyway. The riverside steel mills and heavy industries went into serious decline in 1970-2000, and are no longer the mainstay of the neighborhood.[2]

Much of East Side's homes are the Chicago-style bungalow, and the southeast portion of East Side contains many newer homes (including some bungalows) built after 1980. Currently, there are proposed plans to expand East Side's Calumet Park and Beach, and to extend the existing lakefront bicycle path to the proposed new lakefront parklands in adjacent South Chicago. This proposed future expansion of Chicago's southern lakefront parklands will result in the connection of Calumet Park to Rainbow Beach, the South Shore Cultural Center, and Jackson Park.

Although George Washington High School is an option for a child's continuation in education, many residents from the East Side actually sent their children off to other high schools that accepted students through selective enrollment still within Chicago, Illinois. This trend was due to the many problems the school faced, but, in recent years, the reputation of George Washington High School has gradually risen due to their strong academic program, IB.

East Side is Metra territory, as the nearest Chicago Transit Authority train station is the 95th/Dan Ryan station on the Red Line, 7 miles (11 km) northwest of the neighborhood. Residents utilize the Metra Electric station at 93rd street (9300 S, 3300 E) (in South Chicago), and the South Shore Line at Hegewisch/136th street. The Burnham Greenway Trail travels under the Chicago Skyway, and then southward into the south suburban communities of Burnham and Calumet City.

East Side is also served by three CTA bus routes:

At the northeastern corner of the neighborhood, close to lake Michigan, stands a stone obelisk Illinois-Indiana State Line Boundary Marker to mark the northern end of the surveyed boundary line that separates Illinois and Indiana.

Most of the streets going north and south are named after the alphabet, with Avenue B closest to the Indiana state line and Avenue O closer to the Calumet River. The road which should have been called "Avenue A" is named State Line Road.

The bubble-gum pop song "The Night Chicago Died" refers to "the East Side" of Chicago, confusing even native Chicagoans who have never heard of "the East Side". It was recorded by Paper Lace, a band from Nottingham, England.

The song South Side performed by Moby and Gwen Stefani, which is inspired by the city of Chicago, refers to the 'East Side' in one of its choruses.