The East Slavic languages constitute one of three regional subgroups of Slavic languages, currently spoken in Eastern Europe. It is the group with the largest numbers of speakers, far out-numbering the Western and Southern Slavic groups. The existing East Slavic languages are Belarusian, Russian and Ukrainian;[2] Rusyn is considered to be either a separate language or a dialect of Ukrainian.[3]

The East Slavic languages descend from a common predecessor, the language of the medieval Kievan Rus' (9th to 13th centuries). All these languages use the Cyrillic script, but with particular modifications. 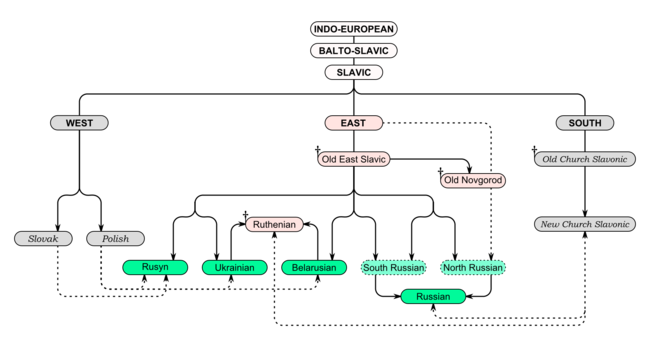 The East Slavic territory shows a definite linguistic continuum with many transitional dialects. Between Belarusian and Ukrainian there is the Polesian dialect, which shares features from the both languages. East Polesian is a transitional variety between Belarusian and Ukrainian on the one hand, and between South Russian and Ukrainian on the other hand. While Belarusian and Southern Russian form a continuous area, making it virtually impossible to draw a line between two languages. Central or Middle Russian (with its Moscow sub-dialect), the transitional step between the North and the South, became a base for the Russian literary standard. Northern Russian with its predecessor, the Old Novgorod dialect, has many original and archaic features. As well, existing several centuries within Polish-Lithuanian Commonwealth, Belarusian and Ukrainian share many common elements, lexical and grammatical above all. Ruthenian, the mixed Belarusian-Ukrainian literary language with Church Slavonic substratum and Polish adstratum, was together with Middle Polish an official language in Belarus and Ukraine until the end of the 18th century.

When the common Old East Slavic language became separated from the ancient Slavic tongue common to all Slavs is difficult to ascertain, though in the 12th century the common language of Rus' is still referred to in contemporary as Slavic.

Therefore, a crucial differentiation has to be made between the history of the East Slavic dialects and that of the literary languages employed by the Eastern Slavs. Although most ancient texts betray the dialect their author(s) and/or scribe(s) spoke, it is also clearly visible that they tried to write in a language different from their dialects and to avoid those mistakes that enable us nowadays to locate them.

In both cases one has to keep in mind that the history of the East Slavic languages is of course a history of written texts. We do not know how the writers of the preserved texts would have spoken in everyday life.

After the conversion of the East Slavic region to Christianity the people used service books borrowed from Bulgaria, which were written in Old Church Slavonic.[4] The Church Slavonic language was strictly used only in text, while the colloquial language of the Bulgarians was communicated in its spoken form.

Throughout the Middle Ages (and in some way up to the present day) there existed a duality between the Church Slavonic language used as some kind of 'higher' register (not only) in religious texts and the popular tongue used as a 'lower' register for secular texts. It has been suggested to describe this situation as diglossia, although there do exist mixed texts where it is sometimes very hard to determine why a given author used a popular or a Church Slavonic form in a given context. Church Slavonic was a major factor in the evolution of modern Russian, where there still exists a "high stratum" of words that were imported from this language.[5]