The East South Central States constitute one of the nine Census Bureau Divisions of the United States. 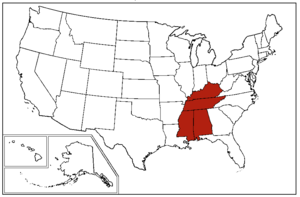 A map of the United States Census Bureau Region 3, Division 6, "East South Central", consisting of the states of Alabama, Kentucky, Mississippi, and Tennessee.

Four states make up the division: Alabama, Kentucky, Mississippi, and Tennessee. The division is one of three that together make up the larger Census Bureau Region known as the South (the other two of which are the South Atlantic States and the West South Central States).

The East South Central States form the core of Old Dixie,[citation needed] one of the nine moral regions identified by James Patterson and Peter Kim in their acclaimed 1991 geopolitical best-seller, The Day America Told The Truth.