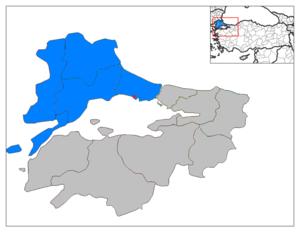 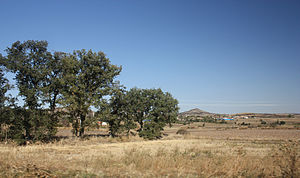 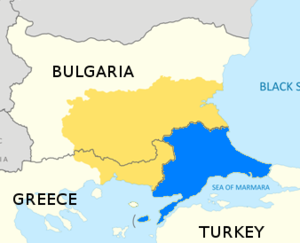 Eastern Thrace within the entire Thrace

East Thrace or Eastern Thrace (Turkish: Doğu Trakya or simply Trakya; Greek: Ανατολική Θράκη, Anatoliki Thraki; Bulgarian: Източна Тракия, Iztochna Trakiya), also known as Turkish Thrace or European Turkey, is the part of the modern Republic of Turkey that is geographically part of Southeast Europe, all in the eastern part of the historical region of Thrace. The area includes all the territories of the Turkish provinces of Edirne, Tekirdağ and Kırklareli, as well as those territories on the European Continent of the provinces of Çanakkale and Istanbul.

East Thrace has an area of 23,764 km2 (3 percent of the country) and a population of about 10 million people (about 12 percent of the total); the population density is around 430 people/km2, compared to about 80 people/km2 for Asiatic Turkey, which is also called Anatolia or Asia Minor. The two are separated by the Dardanelles, the Bosphorus (collectively known as the Turkish Straits) and the Sea of Marmara, a route of about 361 km. The southernmost part of Eastern Thrace is called the Gallipoli peninsula. European Turkey is bordered on the west by Greece for 212 km and on the north by Bulgaria for 269 km, with the Aegean Sea to the south-west and the Black Sea to the north-east.[1][2] 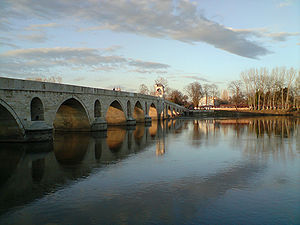 East Thrace was the setting for several important historical events.

Prior to the population exchange between Greece and Turkey, the distribution of nationalities in the local Sanjaks was as follows:

The region includes all of the three provinces of Edirne, Kırklareli and Tekirdağ, as well as the European parts of the two provinces of Çanakkale and İstanbul.