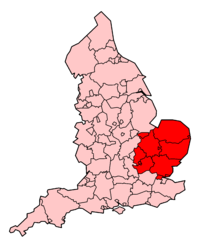 The Trust's coverage area highlighted on a map of England

The East of England Ambulance Service NHS Trust (EEAST) is the authority responsible for providing National Health Service (NHS) ambulance services in the counties of Bedfordshire, Cambridgeshire, Essex, Hertfordshire, Norfolk and Suffolk, in the East of England region. It is one of 12 Ambulance Trusts providing England with emergency medical services, and is part of the NHS, receiving direct government funding for its role. There is no charge to patients for use of the service, and under the Patient's Charter every person in the United Kingdom has the right to the attendance of an ambulance in an emergency.

The Trust controls the mobilisation of Immediate Care charities throughout its area. These include Magpas, SARS, NARS and East Anglian Air Ambulance.[2]

The trust was formed on 1 July 2006 following the three-way merger of the Bedfordshire and Hertfordshire Ambulance and Paramedic Service NHS Trust, the East Anglian Ambulance NHS Trust, and the Essex Ambulance Service NHS Trust. The result was a service covering an area of over 7,500 square miles (19,000 km2) with a population of 5.8 million people, and one which answers over 500,000 emergency calls per year.[3]

The East Anglian Ambulance NHS Trust was formed in 1994 from the three-way merger of Cambridgeshire, Norfolk and Suffolk Ambulance Services.[4]

In 2009, the Trust was censured by the Care Quality Commission after inspection of an ambulance depot and seven of its 100 ambulance stations found patient-carrying vehicles were "dirty" and that staff were "unsure of basic measures for infection prevention and control". The service launched an "urgent and comprehensive review" of its ambulance cleaning programme and reiterated its stance on patient safety, adding that "ensuring consistent high standards of cleanliness is a challenge" with so many stations, covering six counties and an area of 7,500 square-miles.[5] 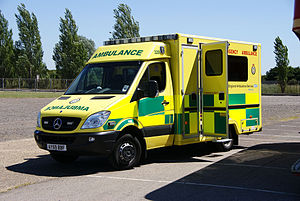 The Trust has the following resources in operation:[6]

The Trust provides its own in-house driving school, which has trained over 220 drivers in emergency driving.[1]

The Trust employs 3,994 people, including 2,516 involved in frontline accident and emergency operations.[1]

In 2013-14 the Trust missed all of its targets in Cambridgeshire and Peterborough. 73.6% of “red 1 calls” for immediately life-threatening situations were met within eight minutes against a target of 75%. 69.4% of “red 2 calls”, which may be life-threatening but less time critical were responded to within eight minutes against a 75% target. In north Norfolk, rapid responses during one month were as low as 25%.[7] According to the Clinical Commissioning Group performance had “deteriorated overall in comparison to prior year at both regional and local level”.[8] In August 2014, the Trust was fined £1.2m over these failures. It was also fined £300,000 over turnaround times at hospitals. The fines were accrued between April and July 2014. EEAST, which handles more than 900,000 emergency 999 calls a year, said it was recruiting hundreds of new staff and investing in new ambulances.[9] In a statement in November 2014, Chief executive Anthony Marsh blamed EEASTS’ continued failure to meet its emergency response time targets on a lack of staff. Acknowledging that the service was still "not good enough” he said that "significant progress" had been made; 536 student paramedics and a further 69 graduate and qualified paramedics and emergency medical technicians had been recruited since January 2014.[7]

In October 2014, EEAST apologised after claims were published in a local newspaper that a body had been left lying next to dustbins at its station in Ely, Cambridgeshire the previous month. Chief executive Anthony Marsh said the Trust was "very sorry for what happened" and had started a "thorough investigation". An EEAST spokesman confirmed the investigation involved "the transportation of a deceased patient", but said he could not comment further as inquiries were ongoing. The newspaper which published the claims said it had done so after being approached by a whistleblower.[10]

Other emergency services covering the East of England: