From Infogalactic: the planetary knowledge core
Jump to: navigation, search
This article is about the time zone with daylight change in Europe. For the static time zone, see UTC+02.

File:Time zones of Europe.svg Eastern European Time (EET) is one of the names of UTC+02:00 time zone, 2 hours ahead of Coordinated Universal Time.

The following countries, parts of countries, and territories use Eastern European Time during the winter only:

The following countries, parts of countries, and territories use Eastern European Time all year round:

Formerly Eastern European Time has been used in the following areas:

Since political, in addition to purely geographical, criteria are used in the drawing of time zones, it follows that actual time zones do not precisely adhere to meridian lines. The EET (UTC+2) time zone, were it drawn by purely geographical terms, would consist of exactly the area between meridians 22°30' E and 37°30' E. As a result, there are European locales that despite lying in an area with a "physical" UTC+2 time, actually use another time zone; contrariwise, there are European areas that have gone for UTC+2, even though their "physical" time zone is different from that. Following is a list of such incongruencies: 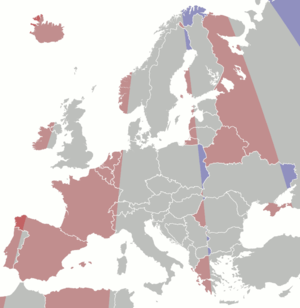 Areas that use UTC+1

These areas have sunrises and sunsets at least half an hour earlier than places on the UTC+1 meridian.

Areas that use UTC+3

Areas that use UTC+3

Tripoints and borders between zones