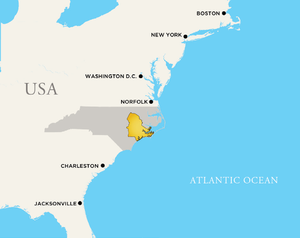 New transitions are being made in the geography of the economic sectors. Economic Development Commissions are transforming, such as North Carolina's Eastern Region Commission's transition into North Carolina East Alliance. Different EDC's have different ways to increase prosperity in the area. NCEA's first focus is to improve the talent pipeline to create a more comprehensive local workforce. Shoop, the Commissioner for Washington's EDC stated "In a private setting, they would be able to access different funds for additional economic projects or initiatives in the county."[1]

Located east of the Piedmont and west of the Atlantic Ocean, Eastern North Carolina contains very few major urban centers. Greenville is close to the region's geographic center. Fayetteville is the largest city in the region, followed by Wilmington and Greenville.

Eastern North Carolina is roughly made up of the 44 easternmost counties in North Carolina. Generally, the region denotes all of the state's counties on and east of Interstate 95 (also known as East Coast USA Main Street stretching from northern Maine to the southern tip of Florida). If defined by geological formations, eastern North Carolina comprises the 44 counties of the Inner and Outer Coastal Plains. In terms of economic similarities, the region includes 41 counties. The commonly accepted definition is all counties east of and crossed by Interstate 95, which is 41 counties. I-95 intersects with US64/264 at Wilson County and is in close proximity to I-40. This makes transportation throughout the region incredible along with easy access to the rest of the state and country. The region is further divisible into three geographic sections: the Southeast, Inner Banks and the Outer Banks.

During the colonial era of American History, the East was the dominant region of North Carolina in both government and commerce. Towns of early significance included Bath, Beaufort, Elizabeth City, Edenton, Kinston, Morehead City, New Bern, Tarboro, and Wilmington. Around the end of the eighteenth century, however, such dominance shifted to the Piedmont center of the state.

Eastern North Carolina is served by two main interstate highways and a number of U.S. routes.

Over 60 motor freight carriers provide service to all parts of the nation.

FedEx, UPS, DHL and Emery have offices in all major communities.

The transportation within the region allows for easy access to anywhere in the entire United States of America. I-40 and I-95 are capable of this with close proximity to I-85 as well. Manufacturers can move their goods efficiently and families can travel with ease.

Much of the regions main highways have been designated as the Historic Albemarle Tour, which connects many historic sites in Eastern North Carolina.

CSX, Norfolk Southern, and the NC Railroad Company serve the industries within the region. The National Railroad Passenger Corporation, Amtrak, is a train service for passengers. Amtrak passenger stations are located in Rocky Mount, Wilson and throughout North Carolina and the Eastern region

The mainstays of the economy still reside in agriculture and defense sectors for most of the east, however it is changing. On the coast, marine trades (port activities and boat building), retirees, and tourism are the economic drivers. In North Carolina's Eastern Region, several industrial sectors are contributing to growth: aerospace, life sciences, and advanced manufacturing. Aerospace activity is spread throughout the region and employs roughly 12,000 workers: this sector is concentrated in Kinston (host of the Global TransPark that has attracted Spirit AeroSystems, CrateTech, and several logistics firms), Goldsboro (AAR Cargo & Mobility Systems), Havelock (Fleet Readiness Center East - a Navy MRO on board MCAS Cherry Point), Rocky Mount (Honeywell and EATON), and Wilson (Kidde Aerospace). Education (East Carolina University), health care (Vidant Health), and financial services are the major employers in the Greenville Metro Area, but the life science sector (R&D as well as manufacturing) is also a significant employer (Patheon, Metrics, Carolina Medical Products, Pioneer Surgical and CTMG). The life science sector also has a significant presence in Wilson (Novartis-Sandoz, Purdue Pharma, BD and Merck) and Rocky Mount (Hospira). In addition to aerospace, the advanced manufacturing sector is represented by automotive parts (Bridgestone/Firestone, ASMO, Uchiyama, Keihin - all Japanese companies - Cooper-Standard and AP Exhaust) and industrial machinery (Cummins Rocky Mount Engine, Hyster-Yale Materials Handling, Crown, Draka Elevator, Aylward) as well as other industries. An historically significant and still important industrial sector is boat building (Grady-White, Hatteras Yachts/Cabo Yachts, Jarrett Bay, Custom Steel Boats, and several others dot the landscape of the coastal plain).

Aerospace & Defense
Millions of dollars have been invested in aerospace development to make Eastern North Carolina the ideal destination for corporate expansion or relocation. The state already contains 160 aerospace companies and prompted the development of the Global TransPark to serve the industry. It is no surprise that this state is an ideal location for aerospace and defense development considering the military bases located within the area. The community colleges have worked with the aerospace industry to create two-year programs that are relevant to aerospace and defense (e.g. Air Frame & Power Plant, Composites, Advanced Machining and Welding).

Advanced Manufacturing and Logistics
In Eastern North Carolina, you can tap the full potential of one of America's top manufacturing states. There are no inventory or intangible taxes in addition to no sales tax on raw materials. Besides the reduction in manufacturing costs, Eastern NC is an optimal mid-east coast location. NC has the largest manufacturing workforce in the southeast and ninth in the US (with Unions <1%) with easy national and international distribution. In addition, the workers compensation and unemployment insurance rates are among the lowest in the nation. All of this in collaboration with a large quantity of the workforce possessing CNC machining skills. Regional logistics assets include multiple trucking companies with various capabilities (including tankers and reefers), freight forwarders, 3PLs, and transportation consultants, three rail providers, multiple ports and a multi- modal air/rail industrial park.

Life Sciences
ENC is part of an internationally acclaimed life sciences corridor, particularly the 13-county region covered by The NC East Alliance. It is adjacent to the Research Triangle with NC being recognized as a national leader in Research & Development and innovation. The continual growth can be attributed to the medical programs in the area (e.g. Duke, UNC-Chapel Hill and ECU) alongside international firms and homegrown startups that has attracted biotech and pharmaceutical innovators as well as medical device manufacturers. The workforce is highly skilled due to local programs at community colleges and the acclaimed medical program at East Carolina University. A regional articulated life sciences ladder, developed with guidelines from the life sciences community, is in place. It includes associate degrees; BS programs in Biology, Biochemistry, Bioprocess Engineering and Industrial Technology, an MS in Biotechnology and a PhD in Microbiology.

Situated just east of Raleigh, North Carolina and the world famous Research Triangle, the BioEast Alliance is a five-county area that is emerging as a major life science region in its own right.

North Carolina is the third leading state in the U.S. in terms of the number of biotech firms and employees. Presently, the BioEast Alliance area employs about 5,000 of those workers and is home to major operations of life sciences firms such as Hospira, Purdue Pharmaceuticals, Patheon, Merck & Co., Fuji Silysia Chemical USA, Metrics, BD, Pioneer Surgical and other leading life science companies.

Value-Added Agriculture & Food
The Eastern Region is internationally recognized as a major agricultural production area. According to NC Department of Agriculture statistics, North Carolina ranks first nationally in the production of sweet potatoes, and second in hogs, pigs, and turkeys. The state ranks 3rd overall for cucumbers sold for pickles, trout sold, and poultry and egg products cash receipts.

Much of the state's production in hogs, turkeys and other poultry is centered in and around the Eastern Region. There are more than 160 facilities within the region involved in value-added agriculture and food manufacturing. Total employment in this cluster exceeds 20,000 people, or 5% of the total workforce.

Many locales throughout the Region provide exceptional amounts of water and sewer capacity to accommodate large processing operations.

The NC Department of Agriculture and Consumer Services has four research farms located within the Eastern Region (and others across the state) that can assist with research in a broad range of areas of interest to value-added agriculture businesses.

North Carolina State University (NCSU) also makes research capabilities available to companies through its Cooperative Extension Services, and also through the Seafood Laboratory located in Morehead City, which is a part of the NCSU Center for Marine Sciences and Technology (CMAST).

Eastern North Carolina is by and large an impoverished area. Nearly 21 percent of people live in poverty in this region[citation needed]. Outsourcing of textile manufacturing jobs along with other manufacturing jobs has caused unemployment in the area to increase particularly in the northeastern area of the state. Many areas of Eastern North Carolina are experiencing little economic growth; however, areas such as Greenville (Pitt County) are growing rapidly due the location of East Carolina University and its associated medical facilities.

Eastern North Carolina is located in the coastal plain region of the eastern seaboard of the United States and has relatively flat land that is primarily used for farming. The Outer Banks and Inner Banks are comparable to the tidewater region of Virginia in terms of land. However, the barrier islands of the Outer Banks are highly rare.

Eastern North Carolina generally consists of 43 counties, which when combined form a total regional area of roughly 9,700 square miles (25000 square km). The counties commonly included in the region are as follows:

Eastern North Carolina communities in the region include: