The eastern cottontail (Sylvilagus floridanus) is a New World cottontail rabbit, a member of the family Leporidae. It is one of the most common rabbit species in North America.

The eastern cottontail can be found in meadows and shrubby areas in the eastern and south-central United States, southern Canada, eastern Mexico, Central America and northernmost South America. It is abundant in Midwest North America, and has been found in New Mexico and Arizona. Its range expanded north as forests were cleared by settlers.[3] Originally, it was not found in New England, but it has been introduced there and now competes for habitat there with the native New England cottontail. It has also been introduced into parts of Oregon, Washington, and British Columbia.[4] In the mid-1960s, the Eastern cottontail was introduced to Cuba, Jamaica, Cayman Islands, Puerto Rico, Dominican Republic, Barbados, Bahamas, Haiti, Grenada, Guadeloupe, Saint Croix and northern Italy, where it displayed a rapid territorial expansion and increase in population density.[5][6]

The eastern cottontail home range is roughly circular in uniform habitats. Eastern cottontails typically inhabit one home range throughout their lifetime, but home range shifts in response to vegetation changes and weather are common.[8] In New England eastern cottontail home ranges average 1 hectare (1.4 acres) for adult males and 0.5 hectares (1.2 acres) for adult females but vary in size from 0.2 to 16.2 hectares (0.5 to 40 acres), depending on season, habitat quality, and individual. The largest ranges are occupied by adult males during the breeding season. In southwestern Wisconsin adult male home ranges averaged 3 hectares (6.9 acres) in spring, increased to 4 hectares (10 acres) in early summer, and decreased to 1 hectare (3.7 acres) by late summer.[9] Daily activity is usually restricted to 10% to 20% of the overall home range.[8]

In southeastern Wisconsin home ranges of males overlapped by up to 50%, but female home ranges did not overlap by more than 25% and actual defense of range by females occurred only in the immediate area of the nest. Males fight each other to establish dominance hierarchy and mating priority.[9] 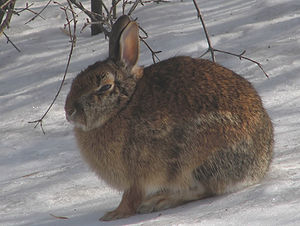 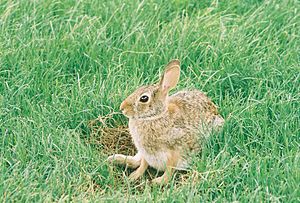 In nest, under production

Most nest holes are constructed in grasslands (including hayfields).[8] The nest is concealed in grasses or weeds. Nests are also constructed in thickets, orchards, and scrubby woods.[3] In southeastern Illinois tall-grass prairie, eastern cottontail nests were more common in undisturbed prairie grasses than in high-mowed or hayed plots. In Iowa most nests were within 64 m (70 yd) of brush cover in herbaceous vegetation at least 10 cm (4 in) tall. Nests in hayfields were in vegetation less than 20 cm (8 in) tall. Average depth of nest holes is 13 cm (5 in), average width 13 cm (5 in), and average length 18 cm (7 in). The nest is lined with grass and fur.[10][12]

The eastern cottontail is chunky red-brown or gray-brown in appearance with large hind feet, long ears and a short fluffy white tail. Its underside fur is white. There is a rusty patch on the tail. Its appearance differs from that of a hare in that it has a brownish-gray coloring around the head and neck. The body is lighter color with a white underside on the tail. It has large brown eyes and large ears to see and listen for danger. In winter the cottontail's pelage is more gray than brown. The kits develop the same coloring after a few weeks, but they also have a white blaze that goes down their forehead; this marking eventually disappears. This rabbit is medium-sized, measuring 36–48 cm (14–19 in) in total length, including a small tail that averages 5.3 cm (2.1 in).[13][14] Weight can range from 800 to 2,000 g (1.8 to 4.4 lb), with an average of around 1,200 g (2.6 lb). The female tends to be heavier, although the sexes broadly overlap in size.[15][16] There may be some slight variation in the body size of Eastern cottontails, with weights seeming to increase from south to north, in accordance with Bergmann's rule. Adult specimens from the Florida Museum of Natural History, collected in Florida, have a mean weight of 1,018 g (2.244 lb).[17] Meanwhile, 346 adult cottontails from Michigan were found to have averaged 1,445 g (3.186 lb) in mass.[18]

The eastern cottontail is a very territorial animal. When chased, it runs in a zigzag pattern, running up to 29 km/h (18 mph). The cottontail prefers an area where it can hide quickly but be out in the open. Forests, swamps, thickets, bushes, or open areas where shelter is close by are optimal habitation sites for this species. Cottontails do not dig burrows, but rather rest in a form, a shallow, scratched-out depression in a clump of grass or under brush. It may use the dens of groundhogs as a temporary home or during heavy snow.[19] 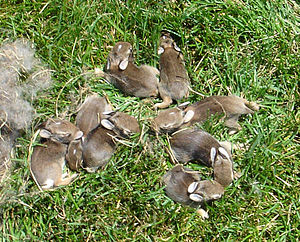 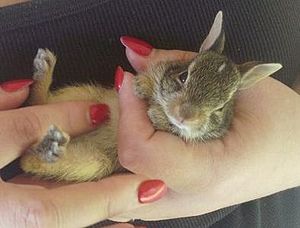 Reproductive maturity occurs at about 2 to 3 months of age. A majority of females first breed the spring following birth; but 10% to 36% of females breed as juveniles (i.e., summer of the year they were born).[22] Males will mate with more than one female. Female rabbits can have 1 to 7 litters of 1 to 12 young, called kits, in a year; however, the average number of litters per year is 3–4 and the average number of kits is 5.[14] In the South female eastern cottontails have more litters per year (up to 7) but fewer young per litter.[12][20] In New England female eastern cottontails have three or four litters per year. The annual productivity of females may be as high as 35 young.[12][21]

The diet of eastern cottontails is varied and largely dependent on availability. Eastern cottontails eat vegetation almost exclusively; arthropods have occasionally been found in pellets.[23] Some studies list as many as 70[23] to 145 plant species in local diets. Food items include bark, twigs, leaves, fruit, buds, flowers, grass seeds, sedge fruits, and rush seeds.[10] There is a preference for small material: branches, twigs, and stems up to 0.64 cm (0.25 in). Leporids including eastern cottontails are coprophagous, producing two types of fecal pellets, one of which is consumed. The redigestion of pellets greatly increases the nutritional value of dietary items.[10][12]

Annual adult survival is estimated at 20%. Average longevity is 15 months in the wild; the longest lived wild individual on record was five years old. Captive eastern cottontails have lived to at least nine years of age.[12]