From Infogalactic: the planetary knowledge core
Jump to: navigation, search
For other uses, see Eastleigh (disambiguation).

Eastleigh is in Hampshire, England, and the main town in the Borough of Eastleigh. The town lies between Southampton and Winchester, and is part of the South Hampshire conurbation. The first substantial growth was as a railway town. Now it is home to many businesses, including a manufacturing plant owned by Prysmian Cables & Systems (formerly the cables division of Pirelli). The town lies on the River Itchen, one of England's premier chalk streams for fly fishing, a designated site of Special Scientific Interest.[1][2] 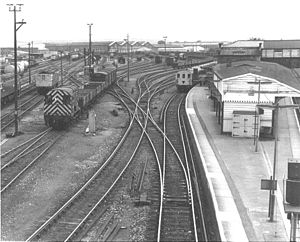 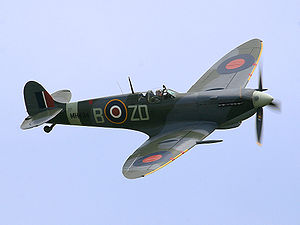 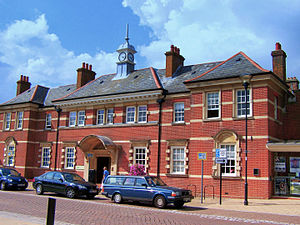 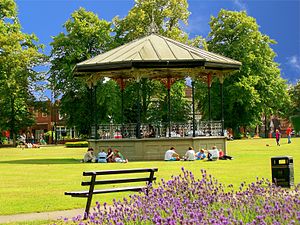 Victorian bandstand in the recreation ground

The modern town of Eastleigh lies on the old Roman road, built in A.D.79 between Winchester (Venta Belgarum) and Bitterne (Clausentum).[3][4][5] Roman remains discovered in the Eastleigh area, including a Roman lead coffin excavated in 1908,[6] indicate that a settlement probably existed here in Roman times.[3][7][8]

A Saxon village called ‘East Leah’ has been recorded to have existed since 932 AD.[9] (‘Leah’ is an ancient Anglo-Saxon word meaning ‘a clearing in a forest’).[9] There is additional evidence of this settlement in a survey from the time which details land in North Stoneham being granted by King Æthelstan to his military aid, Alfred in 932 AD.[3][7][10] The prefix 'Est' or 'East' is thought to refer to its location relative to the established settlement of Baddesley.[3]

The Domesday Book of 1086 gives a more detailed account of the settlement, which is referred to as 'Estleie'.[3]

In 1838 the London and South Western Railway Company (L&SWR) built a railway from Southampton to Winchester.[9][11] It was decided to build a station near the little village of Barton. This railway station was originally named Bishopstoke Junction.[9] In 1868 the villages of Barton and Eastley were combined into one parish.[9] A parish church, the Church of the Resurrection, was built in the same year, at a cost of £2,300.[12] A local noted author of many novels, Charlotte Yonge, donated £500 towards the building of the church.[13] She was rewarded by being given the privilege to choose a name for the 'new' parish; either Barton or Eastly. She chose Eastly, but with a new modern spelling; Eastleigh.[13] In 1891 the L&SWR Carriage and Wagon Works from Nine Elms in London were transferred to Eastleigh. This was followed by the Nine Elms Locomotive Works which were moved there in 1909. These railway works were closed in 2006 but have since reopened, albeit on a smaller scale.

Eastleigh has seen a rapid and controlled expansion in residential, industrial and commercial development over recent years. The borough of Eastleigh was ranked the "9th best place to live in the UK 2006" by a Channel 4 programme.[14]

The United States Navy established a naval air station on 23 July 1918 to assemble and repair Caproni Ca.5 and Airco DH.4 and DH.9 bombers for the Northern Bombing Group of the First World War. The base closed shortly after the First Armistice at Compiègne.[15] Perhaps Eastleigh's best-known 'resident' is the Spitfire aeroplane which was built in Southampton and first flown from Eastleigh Aerodrome. A replica has recently been placed on the roundabout at the entrance to the airport.

Eastleigh Museum, which is to be found in the High Street holds information about the town and the surrounding villages, including Bishopstoke which had been the largest residential area.

Eastleigh F.C. are the town's sole senior football team playing, from 2014-15, in the Conference Premier (after promotion from the Conference South in 2013-14) as well as entering the FA Cup and the FA Trophy.

Eastleigh Ladies Hockey Club is based in South Hampshire. It fields 2 teams in the Hampshire Women's League (playing Saturdays), as well as playing floodlit and indoor league games (playing on weekdays).

Eastleigh Rugby Football Club play from "the Hub" in Eastleigh. They currently have four senior sides, colts and young player development, their 1st XV currently play in the London 3 South West. Also based at the Hub are "the Hurricanes", a team for young adults with learning difficulties.

There is a broadly based running club.[17]

Eastleigh is represented in Parliament by Conservative MP Mims Davies. She was elected for the first time in the 2015 election with a majority of 9,147, taking over from Mike Thornton (LibDem). Mike Thornton was elected in the 2013 by-election (majority 1,771) after the resignation of Chris Huhne, in a by-election that was closely fought with UKIP coming second and the Conservatives coming third.

In 2005 Huhne had been elected as the Liberal Democrat Member of Parliament (MP) for the Eastleigh constituency after the previous MP (David Chidgey, also Liberal Democrat) retired. Eastleigh has a tradition of close contests, and Huhne narrowly beat the Conservative candidate Conor Burns with the second lowest swing against the Liberal Democrats of any seat with a retiring MP (2.6%). David Chidgey had succeeded the Conservative MP Stephen Milligan after his high-profile death. Chris Huhne was appointed as Secretary of State for Energy and Climate Change following the 2010 general election. Huhne resigned the seat in February 2013 after pleading guilty to perverting the course of justice over a 2003 speeding case.[18]

The B&Q head office is on Chestnut Avenue in Eastleigh.[19] The town was formerly home to a Mr Kipling bakery.[20] 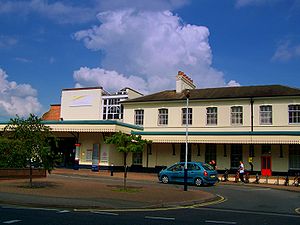 Eastleigh is served by Eastleigh railway station, a mainline station on the South Western Main Line from London Waterloo (just 75 minutes away) and Winchester to Southampton, Bournemouth and Poole, with a fast and frequent service to those places. It is also the junction station for two other routes, the Eastleigh-Fareham Line and the Eastleigh-Romsey Line.

Eastleigh is also located close to the junction between the M3 motorway and M27 motorway, giving easy road access to Southampton, Winchester, Bournemouth, Portsmouth and places between.

The Swan Shopping Centre opened in 1989, and was built in the heart of the town's Victorian 'grid iron' road layout and blocked off Market Street and High Street - although through access was possible for pedestrians while the centre was open. The Swan Centre included a French-style café and a new library[21] (replacing the recently demolished Town Hall Library) in the High Street atrium.

The most famous people linked to Eastleigh are probably Christabel Leighton-Porter, the model for the Second World War cartoon character Jane,[22] and Benny Hill who both lived in the town.[23] Hill's first job was in Woolworths in Leigh Road, Eastleigh. He then moved on to be a milkman for Hanns Dairies, in Factory Road, now Wells Place. His time working in Eastleigh on a horse-drawn milk-float gave him his inspiration for his hit record, Ernie, the fastest milkman in the West.[24][25] In Hill's honour a plaque has been put up close to the site of the now demolished Hanns Dairies building[25] and a new road has been named Benny Hill Close, though many of the people who had bought the new homes were not happy with the decision. An alternative suggestion was Cowpat Lane.[26]

Sir Arthur Young, the eminent police chief, was born at 55 Chamberlayne Road in 1907. Sporting notables include Tommy Green who won an Olympic Gold Medal at the 1932 Los Angeles Games in the 50K walk, and Vince Hawkins who was British Middleweight Boxing Champion in the late 1940s.[27][28][29]

Other notable residents of Eastleigh include:

Eastleigh is twinned[30] with:

It has a "sister city" relationship[30] with: