The climate in this area is characterized by hot, humid summers and generally mild to cool winters. According to the Köppen Climate Classification system, Easton has a humid subtropical climate.[5] 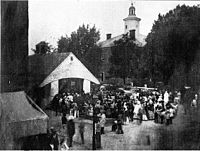 Market House in the town square of Easton during the mid-nineteenth century. 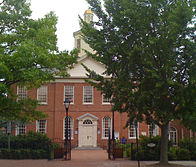 There were 6,711 households, of which 29.2% had children under the age of 18 living with them, 42.8% were married couples living together, 13.8% had a female householder with no husband present, 4.2% had a male householder with no wife present, and 39.2% were non-families. 33.1% of all households were made up of individuals and 16.9% had someone living alone who was 65 years of age or older. The average household size was 2.32 and the average family size was 2.92.

Easton is so named because of its location east of Saint Michaels.[8]

In 1916, the town erected a statue in honour of confederate soldiers from Talbot County.[9]

The town was home to four franchises of the Eastern Shore Baseball League — the Farmers, Browns, Cubs, and Yankees. The Third Haven Meeting House, the oldest Quaker meeting house and one of the oldest places of worship in Maryland, is in Easton. ArtHouse Live, a resident theatre company, is also based in Easton.

In 2008, a lost painting of a Paris street scene by Édouard Cortès was discovered amongst donated items at a Goodwill Industries store in Easton. After an alert store manager noticed that it was a signed original, the painting was auctioned for $40,600 at Sotheby's.[10]

Easton is home to the Easton Ice Hawks. They play in the CBHL (Chesapeake Beltway Hockey League). Easton Ice Hawk home games are played at the Talbot County Community Center in Easton MD.