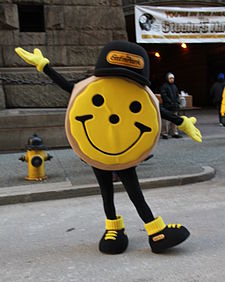 A black and gold Smiley Cookie appears at a rally for the Pittsburgh Steelers in 2011.

Eat'n Park is a restaurant chain based in Homestead, Pennsylvania with over 75 locations in Ohio, Pennsylvania, and West Virginia. The chain is known for its Smiley Cookies. 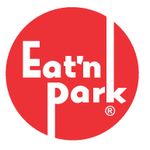 Eat'n Park logo while the chain was affiliated with Big Boy Restaurants.

In the late 1940s Larry Hatch and Bill Peters were supervisors at Isaly's Restaurants in Pittsburgh. On a trip to Cincinnati, Hatch was impressed seeing the Frisch's Big Boy Drive In operation. He and Peters contacted Big Boy founder Bob Wian, reaching a 25-year agreement to operate Big Boy Restaurants in the Pittsburgh area, which would be called Eat'n Park.[4]

Eat'n Park launched on June 5, 1949 when Hatch and Peters opened a 13-stool drive-in restaurant in the South Hills neighborhood of Pittsburgh. The official opening time for the restaurant on Saw Mill Run Boulevard was 2 p.m. Advertised as "Pittsburgh's First Modern Eat-in-your-Car Food Service" the original location was serviced by 10 carhops.[5] Four months later, a second unit opened in Pittsburgh, and within 11 years, there were 27 Eat'n Parks. Since then, the chain has grown to over 75 locations across 3 states.[1]

In 2011, Eat'n Park was awarded the Achievement of Excellence award from the American Culinary Federation.[6]

Despite accepting debit & credit card transactions, Eat'n Park is unusual in the restaurant business by having an ATM at each location. The ATMs were originally owned by SkyBank, and later Huntington Bank after the latter bought SkyBank in 2007. The ATMs are now operated by a third-party company.

Since 2013, Eat'n Park has been a sponsor of the YouTube series Pittsburgh Dad. 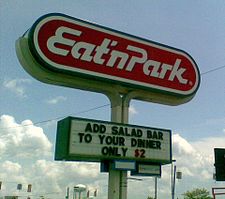 While Eat'n Park serves the western half of Pennsylvania, eastern Ohio and northern West Virginia, the chain used to serve the York, Lancaster, and Harrisburg, Pennsylvania markets from the mid-1990s to 2010. While there were a handful of restaurants in this region in 2000, over the years the number of locations dwindled to 4 by 2010: 1 in New Cumberland, 1 in Harrisburg, 1 in Lancaster, and 1 in York. In March 2010, the New Cumberland and Lancaster locations were bought out and closed; by October 1, 2010 Eat'n Park closed their York and Harrisburg locations due to low sales and therefore left the area for good.

Eat'n Park has been expanding its offerings outside its traditional diners, operating upscale restaurants as well as more casual places.

To date, it's most successful concept is Hello Bistro, a fast casual chain focused on Millennials offering gourmet burgers and salads while keeping its parent company ties to a minimum by offering prepackaged Smiley Cookies and the same brand of ranch dressing as the main Eat'n Park chain, but otherwise making no references to Eat'n Park. Currently with four locations, Eat'n Park plans to expand the Hello Bistro concept throughout the Pittsburgh metropolitan area and potentially into new markets.[7]

Eat'n Park banned smoking throughout its chain on May 30, 2007, 16 months before a statewide smoking ban was enacted in Pennsylvania.

An annual Christmas tradition in the Pittsburgh region is the annual airing of an animated Eat'n Park Christmas commercial that shows a Christmas star struggling to reach the top of a Christmas tree until the tree bends over to help the star up.[8] Initially released in 1982 as a one-year-only ad in support of a charity at Children's Hospital, the ad became so popular that Eat'n Park has aired the ad every year since, starting in late November. Eat'n Park now sells merchandise around the holiday season based around the ad. It is believed to be the longest-running Christmas ad in the United States, longer than national ads by Folgers, Hershey's Kisses, and M&M's, as well as a more regional ad by the Pennsylvania Lottery.[9][10]