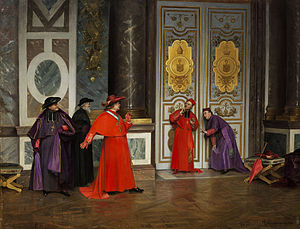 Cardinals in the Vatican, by Henri Adolphe Laissement, 1895 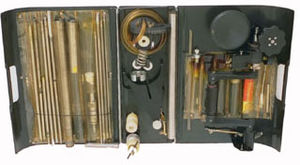 Eavesdropping is secretly listening to the private conversation of others without their consent, as defined by Black's Law Dictionary.[1] This is commonly thought to be unethical and there is an old adage that "eavesdroppers seldom hear anything good of themselves... eavesdroppers always try to listen to matters that concern them."[2]

The verb eavesdrop was originally a back-formation of the noun eavesdropper ("a person who eavesdrops") which was formed from the unrelated noun eavesdrop ("the dripping of water from the eaves of a house; the ground on which such water falls"). An eavesdropper was one who stood at the eavesdrop (where the water fell, i.e., near the house) so as to overhear what was said inside.[3][4]

Eavesdropping can also be done over telephone lines (wiretapping), email, instant messaging, and other methods of communication considered private. (If a message is publicly broadcast, witnessing it is not considered eavesdropping.) VoIP communications software is also vulnerable to electronic eavesdropping via infections such as trojans.

Network eavesdropping is a network layer attack that focuses on capturing small packets from the network transmitted by other computers and reading the data content in search of any type of information. This type of network attack is generally one of the most effective as a lack of encryption services are used. It is also linked to the collection of metadata. Those who perform this type of attack are generally black hat hackers; however, government agencies, such as the National Security Agency, have also been connected.