Ebenezer Cobb Morley (16 August 1831 – 20 November 1924) was an English sportsman and is regarded as the father of the Football Association and modern football.

Morley was born at 10 Garden Square, Princess Street[2] in Hull[3] and lived in the city until he was 22.[2] He moved to Barnes in 1858[3] forming the Barnes Club, a founding member of the FA, in 1862.[3] In 1863, as captain of the Mortlake-based club, he wrote to Bell's Life newspaper proposing a governing body for the sport, that led to the first meeting at the Freemasons' Tavern, that created the FA.[3]

He was the FA's first secretary (1863–1866) and its second president (1867–1874) and drafted the first Laws of the Game at his home in Barnes. As a player, he played in the first ever match, against Richmond in 1863, and scored in the first representative match, between the clubs of London and Sheffield on 31 March 1866.

A solicitor by profession, Morley was a keen oarsman, founding the Barnes and Mortlake Regatta for which he was also secretary (1862–1880). He served on Surrey County Council for Barnes (1903–1919) and was a Justice of the Peace. Morley is buried[4] in Barnes Cemetery, a now abandoned graveyard on Barnes Common, Barnes. He had no children.[4] 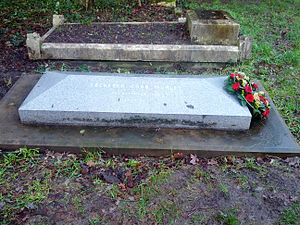 The grave of Ebenezer Cobb Morley in Barnes Cemetery, with a wreath commemorating 150 years of the FA.