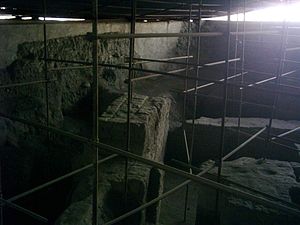 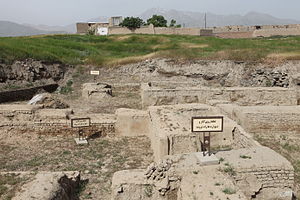 Ecbatana (/ɛkˈbætənə/; Old Persian: 𐏃𐎥𐎶𐎫𐎠𐎴 Haŋgmatāna, literally "the place of gathering", Ancient Greek: Ἀγβάτανα in Aeschylus and Herodotus, elsewhere Ἐκβάτανα, Agámtanu by Nabonidos, and Agamatanu at Behistun) was an ancient city in Media in western Iran. It is believed that Ecbatana is in Tell Hagmatana (Tappe-ye Hagmatāna), near Hamedan.[1] but the history of the city is controversial.

Excavations at Kaboutar Ahang have revealed stone age tools and pottery from 1400 to 1200 BC. According to Herodotus, Ecbatana was chosen as the Medes' capital in the late 8th century BC by Deioces.[1] Under the Persian kings, Ecbatana, situated at the foot of Mount Alvand, became a summer residence. Later, it became the capital of the Parthian kings, at which time it became their main mint, producing drachm, tetradrachm, and assorted bronze denominations. It is also mentioned in the Hebrew Bible (Ezra 6.2) under the name Achmetha (also spelled Ahmetha, e.g. JTS Bible).

In 330 BC, Ecbatana was the site of the murder of the Macedonian general Parmenion by order of Alexander the Great.[citation needed]

Ecbatana was first excavated in 1913 by Charles Fossey.[2] Another excavation was conducted in 1977.

The Greeks thought Ecbatana to be the capital of Medes empire and ascribed its foundation to Deioces (the Daiukku of the cuneiform inscriptions). It is alleged that he surrounded his palace in Ecbatana with seven concentric walls of different colours. In the 5th century BC, Herodotus wrote of Ecbatana:

"The Medes built the city now called Ecbatana, the walls of which are of great size and strength, rising in circles one within the other. The plan of the place is, that each of the walls should out-top the one beyond it by the battlements. The nature of the ground, which is a gentle hill, favors this arrangements in some degree but it is mainly effected by art. The number of the circles is seven, the royal palace and the treasuries standing within the last. The circuit of the outer wall is very nearly the same with that of Athens. On this wall the battlements are white, of the next black, of the third scarlet, of the fourth blue, the fifth orange; all these colors with paint. The last two have their battlements coated respectively with silver and gold. All these fortifications Deioces had caused to be raised for himself and his own palace."

However, this association remains problematic. There is currently no evidence of Median existence in Hagmatana hill[Is this the geographical location? clarification needed] prior to the Parthian era afterwards.[3][not in citation given] Similarly, Assyrian sources never mention Hagmatana/Ecbatana. Some scholars believe the problem can be resolved by identifying the Ecbatana/Hagmatana mentioned in later Greek and Achaemenid sources with the city Sagbita/Sagbat frequently mentioned in Assyrian texts, since the Indo-Iranian sound /s/ became /h/ in many Iranian languages. The Sagbita mentioned by Assyrian sources was located in the proximity of the cities Kishesim (Kar-Nergal) and Harhar (Kar-Sharrukin).[4][5]

Sir Henry Rawlinson attempted to prove that there was a second and older Ecbatana in Media Atropatene on the site of the modern Takht-i-Suleiman. However, the cuneiform texts imply that there was only one city of the name, and that Takht-i Suleiman is the Gazaca of classical geography.

Ecbatana is the supposed capital of Astyages (Istuvegü), which was taken by the Persian emperor Cyrus the Great in the sixth year of Nabonidus (549 BC).