M/Y Eclipse is a luxury motor yacht constructed by Blohm + Voss of Hamburg, Germany. Her exterior and interior were designed by Terence Disdale Design and her naval architect was Francis Design.[4] The yacht was delivered to Russian businessman Roman Abramovich on 9 December 2010. At 162.5 metres (533 ft) long,[5] Eclipse is the world's second largest private yacht, 17.3 metres (57 ft) shorter than Azzam, which launched in April, 2013.[6] The yacht's cost has been estimated at €340 million.[2] 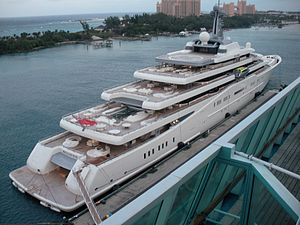 Eclipse has two helicopter pads, 24 guest cabins, two swimming pools, several hot tubs, and a disco hall.[7] It is also equipped with three launch boats and a mini-submarine that is capable of submerging to 50 metres. Approximately 70 crew members are needed to operate the yacht and serve the guests.

For security, Eclipse is fitted with a missile defense system.[2][8]

Eclipse is also the largest vessel employing a novel rotor-based stabilization system[9] against roll motion at anchor and at low cruise speeds, based on the Magnus effect.[10][non-primary source needed]

File:Eclipse yacht landing boat.jpg
The yacht in 2012 with one of the landing boats being launched

Eclipse was launched on 12 June 2009.[11] It arrived in Frederikshavn, Denmark, on 18 September 2009, for tests, and was delivered to Abramovich on 9 December 2010.[3] First pictures of the completed yacht were taken at Kristiansand, Norway, during its refuelling.[12]

In February 2011 Eclipse was made available for charter through SuperYachtsMonaco, a Monaco-based yacht brokerage company.[13] However, according to Motor Boat & Yachting magazine, the yacht is not available for actual charter, and the charter listing is aimed to evade European taxation (charter yachts are exempt from property tax).[14]

The Eclipse travels to St. Martin in the Caribbean each winter to pick up passengers who fly in to St. Martin's airport. The yacht then travels to Abramovich's home on nearby St. Barth's.[15]